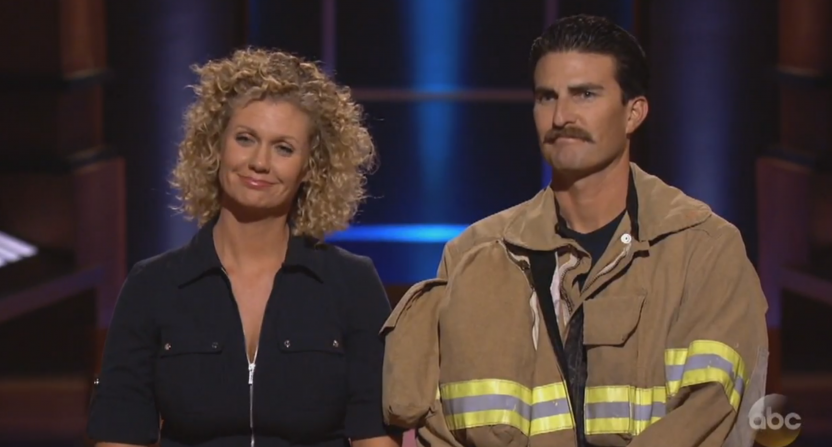 The Bait: It’s a Very Special Shark Tank tonight; all of the products are being pitched by, or on behalf of, workers and volunteers for the greater good. We have a baby-calming blanket, a original ointment, a super snack and a heroic handbag.

True Shark Tank aficionados know about the Baby Dream Machine, a stroller rocking device that was spookily good at getting babies to sleep. It was on Dragon’s Den, the British version of the show—twice, in fact.

Tranquilo is a vibrating mat that calms babies, developed by Gersin, a nurse:

Oh man. Daymond immediately pokes the cry-it-out bear: Parents are often told to let babies cry and cry to make them more independent and manly or something, like your three-month-old is going to start growing a beard and mowing the lawn, but it turns out it’s really hard to do because babies desperately need their parents and parents are hardwired to respond to their baby’s cry.

Gersin boasts $65,000 in sales over 7.5 months, almost all online. It retails for $85 retail right now, but her research indicates the price point could just as well be $99. They make it for less than $30, so the margin is where it needs to be.

Daymond makes an offer: $100,000, for 20 percent of the company, but contingent upon Gersin pursuing a licensing deal—this is one great product in an industry ruled by massive retailers and manufacturers. Kevin thinks she’ll need a lot more capital than she’s asking for—so he offers $250,000 for 25 percent, contingent on her leaving her nursing job:

All non-Daymond Sharks start gushing about the offer, but Gersin seems hesitant.

“Sometimes you come into the Tank, and you blink, and an offer goes,” Lori says. “We don’t want you to blink.” A staredown sounds like the perfect time for our first DRAMATIC COMMERCIAL BREAK.

A blink of an eye (or several) later, Gersin, she says 25 percent seems like too much equity to give away. She seems like she’s fishing for another offer.

“We understand your hesitancy to work with Kevin,” Cuban says, “it’s natural.” After some back-and-forth, Cuban offers to simplify it by going out. Daymond can’t believe she’s still waffling, and so he goes out on principle. Kevin modifies the offer: $200,000 for 20 percent, which is double the cash she asked for at the same valuation. It looks like Gersin is leaning that way, and then Robert jumps in:

Should you buy? Tranquilo doesn’t look quite as magically effective as the Baby Dream Machine did. But we used less-advanced vibration-based baby soothers when we had babies, and they were generally worthwhile. If you’re struggling with putting your baby down, and don’t mind the price point, I’d say you SHOULD BUY.

I love their backstory: King is a veteran who came back to his hometown of Portsmouth, Ohio to find his neighbors struggling with unemployment and opioid addiction. He and Wallace met in the gym, and they combined his drive and her essential oils know-how into a killer skincare product.

As strong as the first impression is, though, the second, third and fourth impressions are increasingly disjointed. We have the name “Doc Spartan,” the angry red-and-black color scheme, the half-a-robot-skull logo and the fact that this is basically a Burt’s Bees kind of thing.

They tout the vaguely medicinal properties of this vitamin- and essence-infused ointment, and Mark’s hackles are immediately raised—he can’t stand pseudosciencey gimmicks. Lori points out the confusion and tension inherent in the “combat-ready ointment” branding:

As the Sharks start swimming away from the deal, one actually moves in for the kill: Robert. He digs the branding, and sees places like tattoo parlors as a fit for an all-natural skin ointment that doesn’t come packaged in pastels:

Swim or chum? As long as Robert’s buying the first round, they have a deal. SWIM.

Should you buy? I’m not sure exactly how much this actually “heals” or “cures” anything, but I bet it smells and feels nice. If you’re a regular user of something like Tiger Balm, maybe you SHOULD BUY.

“We can make fruit snacks great again,” begins this former Peace Corps volunteer, and I’m not sure he’s entirely clear on the whole making-stuff-great-again thing. Having volunteered in the Amazon rainforest, he’s now helping the locals down in Suriname harvest acai berries, from which he’s making fruit snacks:

This is amazing: He’s employing disadvantaged and marginalized people. Um, but to follow along with our political theme, when were fruit snacks great? Maybe 1992, I think, when a lot of people reading this were in grade school and our moms hadn’t yet figured out that “fruit snacks” rarely contain fruit.

What grown-up is buying grownup fruit snacks? Cuban nails it: the great backstory behind a product can’t be the only reason you’re buying a product.

Any time you have a food product on Shark Tank without a montage of “YUMMM!” and “This is the best [X] I’ve ever tasted!” remarks, it probably isn’t all that great. I think this is what Cuban’s dancing around: people are not going to get hooked on these.

Mister Wonderful thinks Delhanty’s going to need a lot more cash than he’s asked for to build this business out—but it won’t come from him.

He’s out, and soon the rest of the Sharks are, too.

Swim or chum? I love his philosophy and community-centric approach, but you’ve got to have a product people want to buy. CHUM.

Should you buy? Maybe try them once out of obligation, but unless you honestly dig the flavor I won’t hold it against you if you decide you SHOULD NOT BUY.

This pitch solves a problem most of us didn’t know existed: Firefighters frequently have to replace their gear, and there’s no practical use for the worn-out duds. Most of it goes “in a landfill,” Matt Rasor says, meaning a lot of high-quality material goes to waste.

That gave Niki Rasor the idea: Why not fashion bags, backpacks and purses out of the old jackets?

The bags are really cool-looking, and obviously high-quality. But Rasor describes a tumultuous experience—she rented a warehouse, and she couldn’t manage all the logistics, so she went back into making them in-home, and now she’s out of space so she needs a warehouse again.

On top of that, she’s taken some really brutal loans to build the business, with interest as high as 50 percent.

“You need a manager,” says an astonished Mister Wonderful. The point is underscored soon thereafter when Niki Rasor says they’re going to try and bring the multi-hundred-dollar price point down by buying jacket material off a roll—so not actually recycling the old gear at all. The Sharks are (largely) appalled:

Rasor makes a great point: “Everyone’s knocking me off, so why can’t I knock me off?” Personally, I think this could work if you used the recycled-material bags as a halo product and the new-material bags as a mass-market piece. Hammacher Schlemmer sometimes offers new reproductions of vintage products alongside an acquired stock of the real deal; no reason that can’t work here.

Well, actually, there is one reason: It’s pretty clear that Niki Rasor is a phenomenal creator and evangelist, but not a gifted business executive. Robert drops a bombshell:

Rasor is understandably emotional: It’s tough to hear someone say they love the thing you threw yourself into building, but don’t want you to continue to build it. But a half a million dollars for the entire company is a very strong offer.

That’s when Lori jumps in with another strong offer: Half as much for a 50/50 partnership. Robert jumps in to clarify he’d be keeping her on as an employee. Rasor asks if she can leave the Tank to consider the offers—but as soon as the Sharks say she can, she decides she doesn’t need to.

Should you buy? If you can afford them, the bags look tremendous and some of the money is going to great causes. SHOULD BUY.