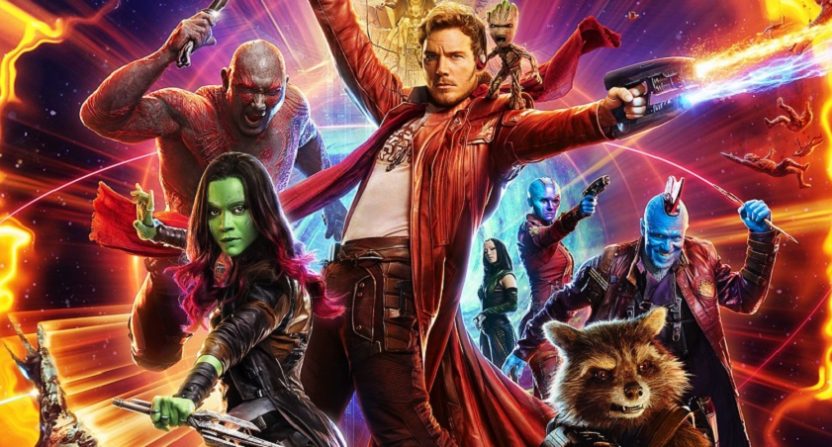 Marvel took a big risk three years ago with Guardians of the Galaxy, stepping out of the comfortable superhero universe that the studio had established with a bunch of characters that weren’t familiar to mainstream audiences and only to a devoted contingent of diehard comic book fans.

The gamble paid off in a huge way for Marvel. Guardians was a huge success, reaching out to a wider variety of fans, maybe even those who had yet to buy in to the phenomenon of costumed superheroes. This was very much not a superhero movie, but instead an outer space spectacle that didn’t take place a long, long time ago, but was in a galaxy far, far away from the likes of Iron Man, Captain America and Thor.

Above all, writer and director James Gunn got us to care about these new characters, most of whom weren’t necessarily likable or heroic. These weren’t people who were going to do the right thing or experienced a moral epiphany that compelled them to help people. Mostly, this was a gang of rogues whose interests were largely self-centered and only decided to band together to help achieve their individual objectives. But along the way, they found kinship in being outcasts and from the losses each of them suffered. Discovering a larger purpose certainly helped with that.

That attention to detail is what fuels Guardians of the Galaxy Vol. 2 and allows Gunn to just get this movie rolling. There is an opening prologue to the story, in which we see the latest example of Marvel using digital effects to de-age an older actor. They get better at it each time out, though the effect is both amusing and unsettling. If someone like Clint Eastwood is ever cast in a Marvel movie, you know a younger version of him is going to appear.

But after we’re introduced to one of the new characters, Gunn reunites us with the gang we’ve missed without much set-up or exposition necessary. He knows we know these guys, thanks to the work he put in with the first film. And the result is one of the more unconventional opening sequences we’ve seen in a movie like this. The prologue allowed us to settle in and then the story jumps right into the action.

Despite Star-Lord, Gamora, Drax and Rocket facing a formidable, voracious, gigantic, multi-tentacled, multi-jawed adversary that will challenge their mettle and demonstrate how the Guardians have become a team, Gunn focuses the camera on what became a sensation after the first movie (and the star Vol. 2’s first trailer): Dancing Baby Groot. The big fight between our heroes and the big monster? Yeah, that’s happening mostly in the background. The sequence mostly serves as a jacked-up credit sequence, but it also helps establish the tone of the film. Have fun and enjoy these characters.

Unfortunately, Gunn sometimes forgets this during Guardians Vol. 2, which is one of the surprising flaws of this movie. The characters that are so compelling and appealing get set aside for the sake of spectacle and a flurry of digital effects that certainly looks impressive, but ends up feeling kind of boring because it takes away from the personal touch — the banter and up-close action — that made this whole enterprise so enjoyable to begin with.

That’s not to diminish how spectacular the big action set pieces are. The digital effects — whether it’s with cosmic power, aerial dogfights in outer space, or the landscapes that just pop with color and wonder — are some of the best work ever created for a Marvel film. These movies have already pushed the boundaries toward the inter-dimensional and cosmic with the Thor movies and Doctor Strange. But Marvel will be going even further in that direction with the next two Avengers films and the upcoming Captain Marvel movie. This is the next stage for the Marvel Cinematic Universe and Gunn continues to guide the mythology further through that doorway here.

Yet Guardians Vol. 2 may also be a cautionary tale for Marvel in remembering what has made their movies so special and helped them resonate with geek and mainstream audiences. While watching the Guardians battle giant monsters and cosmic gods on fantastical landscapes fills the big screen wonderfully (and more than justifies your ticket price), the story is far more engaging when these characters are bickering with one another and demonstrating their hilarious personality quirks.

Gunn probably overcompensates for that by giving every character time to shine. Thanks to his wonderful cast and a very funny script, that works well — even when it slows the movie down a bit. But he’s also too heavy-handed with the overarching theme of family and probably tries a bit too hard to apply that motive to everyone in the story.

One argument that you’ll surely have among friends and social media followers is who the true star of this film is. For some, it will be Baby Groot, who has become the cute mascot of our time. It’s almost going to be disappointing when he grows back into his larger, more imposing form (though it’s easy to forget how memorable he was before being reborn). Others will point to Drax, who gets most of the movie’s best one-liners. Dave Bautista sells the brute’s literal-mindedness and lack of social tact absolutely perfectly.

However, the breakout is probably Michael Rooker’s Yondu, who was the crazy bad guy in the first Guardians movie, but enjoys some greater complexity here. As it turns out, he had a reason for taking Peter Quill under his wing other than figuring a small kid could get into small spaces to steal things. And a warped moral code is a code nonetheless, one that alienates from his gang of intergalactic thugs, the Ravagers. There’s a soft spot underneath that nasty blue exterior, after all.

Yondu is also the gateway to a larger world of Guardians mythology, and Gunn acknowledging Marvel Comics history with some deep character cuts is sure to delight many longtime, devoted fans, some of whom may not think of Star-Lord, Rocket, Gamora, Drax and Groot when they hear the Guardians of the Galaxy name. (Personally, that was my first thought when I heard that Marvel was making a Guardians film: These aren’t the Guardians I remember.) Sylvester Stallone’s brief appearance and one of the movie’s many end-credits scenes tie into that nicely.

Ultimately, however, Guardians of the Galaxy Vol. 2 feels a bit overstuffed. Stallone’s cameo, along with another that is sure to get some laughs are among the many, many references meant to reflect Quill’s 1980s upbringing and Gunn’s deep love for the cosmic side of Marvel Comics mythology. While that adds to the tremendous joy of the movie and will compel so many to either point to the screen or nod knowingly, it all ends up being just a bit too much. Knowing that the Guardians of the Galaxy will return in a third film, maybe Gunn could have saved some of this stuff for that movie. But most of us will probably have too much fun to worry about that.

1 thought on “Guardians of the Galaxy Vol. 2 is ridiculous fun, loses itself in CGI spectacle”