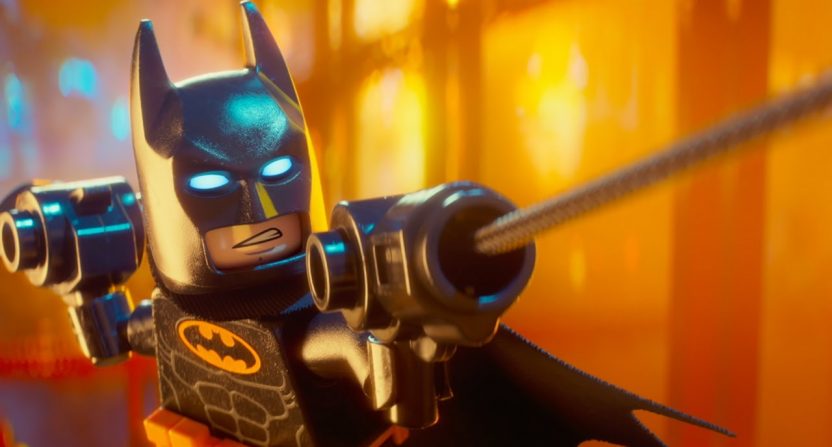 Everyone who says that Warner Brothers’ DC Comics Extended Universe isn’t fun enough and doesn’t celebrate the joy of its iconic superheroes finally has the movie they want in The LEGO Batman Movie.

Sticklers might say that doesn’t count because it’s not Ben Affleck’s version of Batman (or whatever comes after that) and doesn’t tie in with Zack Snyder’s Man of Steel, Batman v Superman: Dawn of Justice and the upcoming Justice League, in addition to the Wonder Woman and Aquaman films soon to hit theaters. But don’t set arbitrary rules to be a buzzkill, especially for a movie that isn’t really following any rules itself.

The LEGO Batman Movie celebrates the best part about the Caped Crusader. It’s not that he’s a brooding Dark Knight who has pledged himself to a life of crimefighting to keep Gotham City from suffering the same loss Bruce Wayne did as a child, when his parents were gunned down by a mugger. It’s not that Batman presumably represents the best of us, training his body and mind to their utmost capability in order to keep his promise to protect. And it’s certainly not that Batman has become a grim, joyless, sadistic bully in recent cinematic adaptations and several comic book interpretations.

No, this movie celebrates how cool it is to be Batman. He’s got all the gadgets and vehicles, along with the coolest mask and cape in comic book mythology. He’s in peak physical condition. He’s ridiculously wealthy, has a devoted butler and mentor, and lives a jet-setting playboy lifestyle to keep up the appearances of his secret identity. He’s adored by the public (at least those who don’t fear him) for being Gotham City’s hero.

So what is this guy always brooding about? Oh, other than never getting over the murder of his parents and pledging himself to a life of guaranteed loneliness. That gets to the central theme of this movie. Everyone thinks it has to be cool to be Batman — and to someone less psychologically damaged, maybe it would be. But deep down, he’s a guy who goes home to a virtually empty mansion and cave underneath with reheated meals prepared by his faithful butler, Alfred, waiting for him.

Virtually all of the live-action Batman films have tried to explore what would compel a person to devote his life to avenging his parents and fighting crime while dressed up as a bat. He’s a fundamentally messed-up dude. The LEGO Batman Movie delves into that territory too, but frames the armchair psychology more humorously.

Continuing what Phil Lord and Christopher Miller established with in 2014’s The LEGO Movie, this version of Batman (voiced by Will Arnett) celebrates that his life is filled with darkness and how that makes him look like a cool badass. But in the LEGO universe, Batman isn’t disturbed so much as repressed, refusing to get in touch with his feelings. When Alfred (Ralph Fiennes) raises the issue of Batman’s need for family, he goes into (hilariously childish) denial.

Director Chris McKay and screenwriter Seth-Grahame Smith (along with four other credited writers) brilliantly and entertainingly deconstructs virtually everything about the Batman mythos and all of the incarnations that includes, whether through the comic books, TV shows (live action and animated) and feature films. One of the aspects of Batman that has made him such an enduring pop culture icon for nearly eight decades is that there have been so many versions of the character, and all of them work on some level.

Sure, some interpretations of Batman are more popular than others. The grim, joyless avenger has been the most accepted take on The Dark Knight since the 1980s when Frank Miller made him an angry psychotic who was still trying to force the world into making sense. That version still largely applies, for no other reason than it presents Batman in stark contrast to his fellow DC Comics superheroes such as Superman, Green Lantern and The Flash.

But Batman has also been portrayed as much more fun, notably in the 1966 TV show starring Adam West and the animated The Brave and the Bold series that ran on Cartoon Network from 2008 to 2011. That Caped Crusader was much more of a swashbuckler, a relentless do-gooder who enjoyed being a superhero and the delight that came with it. His gadgets and vehicles weren’t tactical, so much as clever and sometimes ridiculous, either superfluous or anticipating a situation that would almost certainly never happen. (Shark repellant?)

The LEGO Batman Movie combines every interpretation of the character that’s ever been portrayed. He’s relentlessly dark and has all the weapons, gadgets and vehicles he needs to fight the villains of Gotham City (and beyond), but also really enjoys being Batman. Actually, he enjoys it a bit too much. He loves the adoration and receiving all the credit for keeping Gotham safe, all of which feeds his superheroic ego.

What truly sets this Batman apart is that he’s an overbearing narcissist. He doesn’t want to share any of the glory, nor any of the pain, with anyone else. But Alfred knows that’s exactly what he needs. Batman needs someone to share his life with, not just the empty companionship that millionaire playboy Bruce Wayne can find any time he chooses.

Maybe that’s young orphan Dick Grayson (Michael Cera) who takes advantage of Wayne’s distracted cluelessness to become his ward. Better yet, it could be Barbara Gordon (Rosario Dawson), who’s succeeding her father as police commissioner. The only problem there is that Gordon wants to do business differently. Having been a successful policeman elsewhere (after graduating from “the Harvard for police”), she knows that Gotham City depends far too much on letting Batman save the day and crime has only gotten worse — and more outlandish — because of it.

But that’s the way Batman likes it! He needs to be wanted and idolized! Why does he do such a poor job of making sure all of Gotham’s bad guys get imprisoned properly? (Or why doesn’t he just kill them, though that’s a question this family-friendly movie doesn’t ask.) Because his rogues gallery of villains fill the void in his life. And no one knows what Batman needs more than his arch-nemesis, The Joker (Zach Galifianakis). The two of them have the ultimate dysfunctional relationship, something The Joker willingly acknowledges while Batman maintains his aloof loner persona.

It’s a hilarious, yet astute commentary on the dynamic between the two enemies, taking something that Frank Miller and Christopher Nolan touched on and pushing it to its comedic extremes. And really, that approach applies to this entire movie. McKay and Grahame-Smith embrace everything about Batman and take it to its comedic limits. The story even goes beyond those limits, considering the many, many other villains that end up in this story, such as Sauron, Voldemort and King Kong (all of whom have some tie-in to Warner Brothers films or LEGO licenses, of course).

Batman is the coolest superhero. (I acknowledge that Iron Man is a suitable rival for that title, since they’re both rich and have access to the most wonderful toys.) No wonder Ben Affleck wanted to play him (even if he may not want to anymore). Great Batman films have been made, but now there’s a movie that celebrates everything that’s made him significant for nearly 80 years. In the case of The LEGO Batman Movie, it just took embracing the ridiculous to experience the sublime.