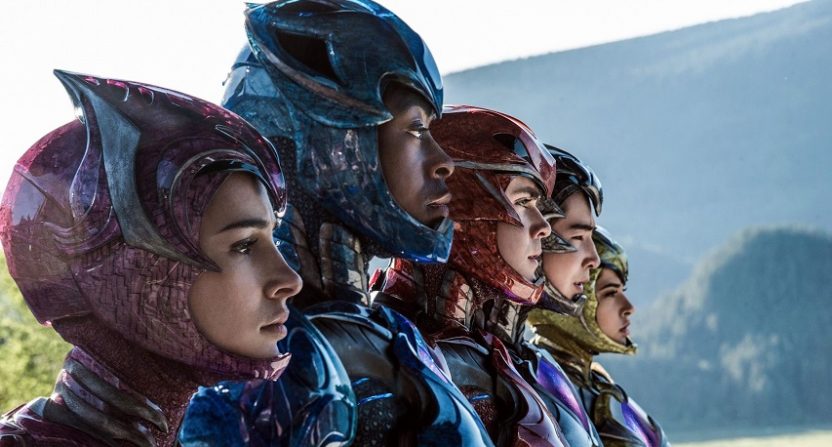 Power Rangers is a movie that makes you wonder what the ideal audience is for this movie. OK, it’s clearly an appeal to kids and teens who want some superhero-type martial arts fighting against monsters on the big screen.

But popular brand aside, is this movie for fans of the Mighty Morphin Power Rangers TV show that was fun, kid-friendly, after school (or Saturday morning) action on Fox Kids from 1993 to 1995? (The show and property has been repurposed and rebooted repeatedly in new series and properties over the past 20-plus years.) Is this an attempt to reinvent a brand and set of characters for a whole new audience, aimed at bringing in big box office dollars?

The answers to these questions are probably obvious, but I found them intriguing nonetheless while looking around at theatergoers during a showing of Power Rangers. The range of ages spanned from older viewers who likely grew up on the TV show (maybe some who just wanted a fun action movie) and parents bringing their kids for some safe, family-friendly action that’s not as violent as current superhero movies (such as Logan) have been getting.

Despite my love of geek culture, superhero tropes, giant monster battles, and heroes fighting in spandex, the Power Rangers always felt like they weren’t quite for me. In my mind, they were apparently just one step too far into geekdom, especially in embracing the campier aspects and cheesy production values that were seemingly a hallmark of the series. But I’m sure if I’d have been 10 years younger during the Power Rangers’ heyday, I would have loved that show, just like Ultraman and Johnny Sokko.

The best thing about Power Rangers is that it successfully reaches out to each of its targeted audiences. Younger viewers can likely relate to each of the characters being in high school and the constant struggle of trying to fit in and meet the expectations of your loved ones and peers. The first half of this movie is like The Breakfast Club set in the current day, with a quintet of screw-ups and outcasts finding a common bond in their shared detention, realizing that they’ve all been rejected or given more adversity than a teenager should be expected to handle. There’s not exactly an assistant principal Vernon to unite against, but the story eventually has to move past that detention setting.

Another movie that seems to have heavily influenced Power Rangers is Chronicle, the 2012 film about three friends who gain superhuman abilities after discovering an object (presumably of alien origin). Fortunately, Power Rangers isn’t filmed found-footage style, a trend that has thankfully worn out its appeal. But the story similarities to Chronicle remain. The five acquaintances whose paths have each taken them to a quarry outside the California town of Angel Grove are drawn to an alien spaceship hidden inside the mountain. Eventually, the teenagers find coins, each of a different color, that will help them unlock their inner warriors and become the Power Rangers that are needed to protect the Earth from destruction.

Here’s where Power Rangers veers from its strong influences and becomes a hero’s journey familiar to virtually everyone familiar with superhero tropes and escapist power fantasies. The teens don’t just automatically touch the coins and become the fighting heroes we know they’ll eventually become. They have to earn those suits of armor and accept the responsibility that comes with that privilege. But there’s something of a twist to the story that is faithful to the origins established by the original series, yet there’s a spin on it that adds a modern touch and adds a bit more resonance to the mentor-protégé relationship.

Those familiar with the Power Rangers mythology know that the team is led by Zordon, the alien leader who provides the teens with their abilities, guiding them to their larger purpose as heroes. But there’s a bit more backstory to Zordon in this film version than the TV series originally created.

Played by Bryan Cranston, the Power Rangers’ sage mentor used to be one of the colorful warriors himself. Tasked with protecting the Earth millions of years ago, he and his fellow Rangers were defeated in battle and wiped out, betrayed by one of their own. But rather than die, Zordon went into hibernation as the Earth grew around the wreckage of his ship. All he needs to wake up are for the coins to find five new trainees who can take up his original cause and prevent humanity from extinction.

If you’re wondering why an actor like Cranston would take a role like Zordon, the words “easy paycheck” come to mind. For all but the prologue, Cranston is a face on a screen, sharing wisdom and guidance with his new charges while constantly reminding them that they’re not good enough to be Rangers. Though Zordon didn’t die, per se, his soul was preserved by his spaceship, watched over by his robot servant, Alpha-5 (voiced by Bill Hader). Yet he’s never meant to escape and once again become the Red Ranger who leads the superteam. As much as he wants to, he has to accept that a new Red Ranger must be trained to lead a new group of warriors against Rita Repulsa (Elizabeth Banks), whose thirst for power will destroy everything in sight.

But Zordon quickly finds his guy in Jason Scott (Zac Efron lookalike Dacre Montgomery), a former star quarterback who pissed away his future by hurting his knee in an auto accident following a failed prank and getting kicked off the team. Maybe Jason is a natural leader as a quarterback, but also has an inherent sense of right that compels him to protect people from bullies and reach out to those who could also use a friend.

The rest of the team falls in line from there. Kimberly (Naomi Scott), a popular girl shunned by her friends, is the Pink Ranger. Billy (RJ Cyler) is on the autism spectrum and still trying to make his late father proud, becomes the Blue Ranger. Zack (Ludi Lin) cares for his terminally ill mother at home and has no use for school as a result, and is the Black Ranger. And Trini (Becky G), who’s the new girl in town every year as her family moves around, is the Yellow Ranger. Each of the actors is appealing and adds something to the story — some more than others, of course — compelling the audience to root for them.

It’s almost a shame when it’s morphin’ time and they all finally suit up as Rangers, getting lost underneath the action of the story. They were all so much more interesting as conflicted teenagers trying to figure out their lives. As much as I thought I wouldn’t like Power Rangers, as if I was somehow above it because I was too old to indulge in the nostalgia being offered, this movie surprisingly drew me in. These kids got to me and I found their stories relatable. Some might wince at the attempt to be all things to all people, notably in Trini’s uncertainty about her sexual orientation. Hey, welcome to 2017.

It’s only when the team finally jumps into Go, Go, Power Rangers action with their battle vehicles that you’re reminded of what the Rangers have always been: a little bit goofy, a little bit cheesy, but rather harmless fun. How much you’re willing to embrace that will likely affect your enjoyment of this movie. But deep down, you probably knew what you were getting into, going to see a Power Rangers movie.