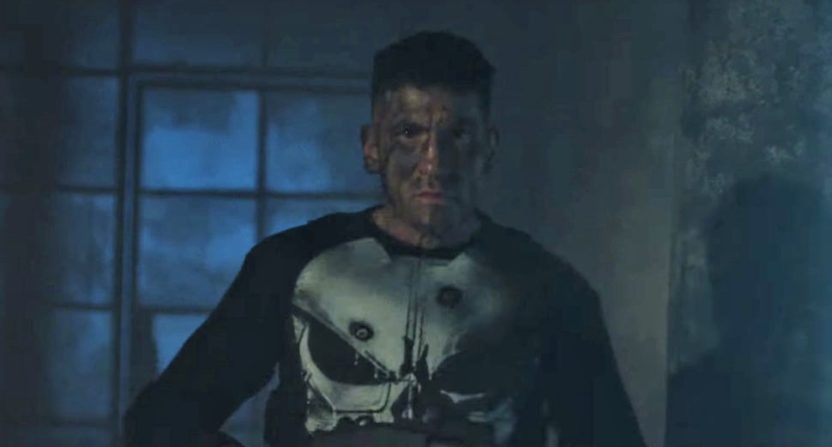 Last week was hard to follow up with new trailers for Justice League and Star Wars: The Last Jedi. But Marvel dropped exciting previews from both their movie and TV sides, while we got our first look at a sports biopic that’s drawing plenty of critical acclaim.

The biggest reveal in Netflix’s new trailer for The Punisher is a premiere date. Finally! Frank Castle will bring his bloody vengeance to our TVs and streaming devices on Nov. 17.

It’s interesting that The Punisher will be available for binging on the same weekend that Justice League hits theaters. Maybe a bit of a challenge from Marvel to DC? Of course, fans will probably consume both. But it seems unlikely that they’d put Justice League on hold when The Punisher is available to be watched at any time.

Another interesting detail in this preview — for longtime fans of The Punisher, whether in Marvel Comics or movies — is that Castle’s family isn’t killed by the mob, but apparently a black ops military group he was involved with. Castle knows too much about the illegal activities that the unit was engaged in, which makes him a target. How he goes from seeking revenge on those people to the general criminal underworld — as we saw in Daredevil, Season 2 — remains to be seen.

I, Tonya, the Tonya Harding biopic starring Margot Robbie, drew major buzz at the Toronto Film Festival with largely positive reviews for its dark comedic tone and the performance of its cast, including Allison Janney as Harding’s mother and Sebastian Stan (Captain America: Civil War) as infamous husband Jeff Gillooly.

This trailer is very much a teaser, lasting less than a minute and showing that the figure skating footage with Robbie looks convincing. The opening shot of Harding putting out her cigarette (very un-figure skating-like behavior) with her skate blade is a powerful one. But Robbie also sounds like she’s channeling her Brooklyn-esque, Harley Quinn accent for this role, which doesn’t seem to fit the Portland-born Harding.

Can Chris Hemsworth carry a movie when he’s not playing Thor? Maybe he doesn’t have to carry 12 Strong. For one thing, Michael Shannon and Michael Pena are two excellent co-stars. For another, the story of the first Special Forces team sent into Afghanistan after the Sept. 11 attacks should be plenty compelling on its own.

At first glance, this movie resembles Lone Survivor and 13 Hours, but the trailer also shows a key difference in the soldiers having to adjust their tactics to the Afghan terrain and traveling on horses as they fight the Taliban. Ryan Star’s somber cover of Tom Petty’s “I Won’t Back Down” (which was surely chosen before Petty’s death) adds a poignant touch to the trailer.

The most underrated performance of Jim Carrey’s career might be his portrayal of comedian Andy Kaufman in 1999’s Man on the Moon. (Do more people remember R.E.M’s title song from the soundtrack?) But Carrey went deep into method acting for the role, losing himself as Kaufman, who from all accounts was not a pleasant person to deal with.

Apparently, there was a lot of behind-the-scenes footage of Carrey refusing to break character and generally being a pain in the ass to everyone on the production, including director Milos Forman. But as Carrey mentions, the movie studio didn’t want that footage released because Carrey came off as a major asshole. But nearly 20 years later, the footage appears to be a fascinating look into an actor’s process in embodying a distinct personality. Hopefully, this creates more appreciation for Carrey as an actor.

A movie that didn’t draw positive buzz out of the Toronto Film Festival was Louis C.K.’s I Love You, Daddy, which is largely perceived as the comedian’s tribute to Woody Allen. Neither C.K. or Allen is particularly popular in our current cultural climate due to accusations of sexual misconduct.

The subject matter of the movie seems pretty icky. C.K. plays a father and successful TV producer whose daughter (Chloe Grace Moretz) wants to spend her senior with him. She enters a relationship with a famous director (John Malkovich) — and far older man — which makes C.K.’s character decide he needs to be a better father. I guess we’ll have to see the film to see if the old guy who dates much younger woman is taken to task.

Jean-Claude Van Damme has gone meta with his career before. In the 2008 film JCVD, Van Damme plays himself — or a version of himself — as an out-of-work action star who goes home to Belgium and ends up involved in a post office robbery atttempt.

In this upcoming Amazon series, Van Damme plays himself — or a version of himself — again, also as a formerly famous action star who needs a new gig. The conceit of the series is that his acting career was always a front for him being a black ops special agent, and he wants to get back in the game. The pilot was directed by Peter Atencio, best known for his work on Key & Peele, so that bodes well for a comedy. It’s always fun to see someone poke fun at themselves, something JCVD has learned well.

After Thor: Ragnarok hits theaters on Nov. 3, the next Marvel movie down the chute will be Black Panther and its second trailer is generating plenty of excitement. Above all, this looks like a Marvel film unlike what we’ve seen before with the exotic sci-fi setting of fictional African nation Wakanda and its warrior king, T’Challa (Chadwick Boseman). Erik Killmonger (Michael B. Jordan) also appears to be a very promising villain, someone with burning ambition who can also contest the hero physically.

However, perhaps the most intriguing aspect of this trailer — and the film to come — is the role women play in the story. They’re not sidekicks and love interests, but are a key part of the action. The Panther’s bodyguards are all women, his mother and sister are important parts of his life, and each of them are mentors and collaborators. This should be a refreshing change for Marvel films, which haven’t often featured women prominently.