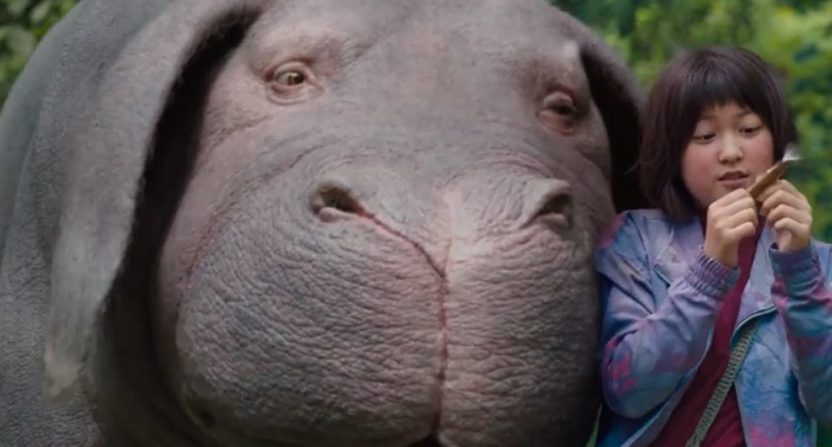 With networks presenting their upcoming shows to advertisers and media at the TV Upfronts in New York, there were a whole lot of TV trailers available this week — far more than we can collect here. But if we missed one that you think warranted some attention, please let us know. We picked what we think could be the most intriguing, along with several attention-grabbing movie trailers for the week, including the final War for the Planet of the Apes preview, a look at Netflix’s upcoming Bong Joon-Ho film and a long-awaited first look at Star Trek: Discovery.

War for the Planet of the Apes – July 17

Based on the previous two films in this franchise reboot, War for the Planet of the Apes may end up being the best movie of the summer. These movies have outstanding digital effects (best demonstrated by Andy Serkis’s motion-capture performance as Caesar), but are also smart with their storytelling and character arcs, and know how to pack a dramatic punch. Even better, the action sequences are coherent, while providing spectacular visuals. Caesar vs. Woody Harrelson with Earth at stake!

Fox has already provided some excellent X-Men-related TV with Legion (on FX). The Gifted probably won’t be as daring, in-depth and challenging with its storytelling. But its premise of young mutants on the run and going underground to avoid capture by the government is promising. Most compelling could be Stephen Moyer’s character, tasked with hunting down mutants until he has a change of heart when his children are the target. There could be just enough references to the X-Men movies and comic books to intrigue fans.

Alison Brie is a talent who’s been deserving of her own showcase for a while, following strong turns on Mad Men and Community. She’s also been good in films like Sleeping with Other People, and those Smirnoff Vodka ads with Adam Scott. With Netflix’s GLOW, Brie has her leading role as an aspiring actress who can’t get a break until she finds the outlet that lets her utilize her skills — in a made-for-TV womens pro wrestling league. Marc Maron as a washed-up director in charge of the show also looks like fine casting.

Making a movie about the 1973 tennis match between Billie Jean King and Bobby Riggs has been a surprisingly fierce competition, with three such projects in the works. The one that was the farthest along in development gets to the screen first with Emma Stone as King and Steve Carell as Riggs. Directed by the Little Miss Sunshine team of Valerie Faris and Jonathan Dayton, Battle of the Sexes looks like it could be both funny and poignant, especially in depicting everything King was going through off the court in her personal life and activism for women’s rights.

Seth McFarlane making fun of Star Trek? We’re intrigued. Hopefully, The Orville has more comedy in it than what could be a sketch comedy skit stretched out too far. Mommy and Daddy fighting in space might help set it apart. McFarlane is also a science buff, having sold Fox on a new version of Cosmos, hosted by Neil deGrasse Tyson, so maybe he can nerd out and drop some knowledge on the audience while also going for some laughs. Jon Favreau (The Jungle Book) directing the pilot episode is another reason to tune in.

Netflix getting into the Bong Joon-ho business shows how daring the streaming outlet is in its ambition to create movies and TV shows that rival and surpass cable competitors like HBO and Showtime, while also presenting an appealing alternative to what’s being offered in theaters these days. A movie like Okja may have gotten lost in theaters, which sort of happened to Jong-ho’s previous film, Snowpiercer. Whether or not it finds a larger audience on Netflix is something we may never know, since the company is coy about its numbers. But Okja can certainly be more accessible this way.

Joon-ho and writer Jon Ronson seem like an ideal combination to tell a story with sci-fi elements that also comments on our society’s concerns over environmental sustainability and food sources. The South Korean can also tell an entertaining monster movie, as he demonstrated with 2006’s The Host. But Okja seems more cuddly than beastly. Will Tilda Swinton get to turn him into hippo chops and steaks?

This could be the worst thing to happen to Seth McFarlane’s Star Trek parody: A new Star Trek series that actually looks really good. With the rebooted movie franchise on shaky ground after last year’s Star Trek Beyond performed far below expectations, the time seems ideal for a new TV series. The movies have gotten away from the key tenets of exploration and adventure that the original TV show espoused, but Star Trek: Discovery looks like it follows the Gene Roddenberry vision more closely.

Discovery looks promising with more ethnicity and color than we’ve seen in previous incarnations of Star Trek, led by Michelle Yeoh as the starship captain and Sonequa Martin-Green as her first officer. Additionally, the make-up and digital effects look even stronger than we’ve seen on other Star Trek shows which ran in syndication. Though Discovery will be on CBS’s streaming network, having that big corporate money behind it appears to help.

Geremy Jasper’s first full-length film drew a lot of buzz at Sundance, largely for its music. But Patti Cake$ has a lot of energy to it, based on this trailer, with a lead character — Patricia Dombrowski, a.k.a. Killa P, a.k.a. Patti Cake$ — who has much more talent within her than her appearance and life situation might indicate.

Does it even matter that this movie apparently doesn’t have any stars or recognizable names in it? Maybe that makes this story of an aspiring rapper stuck in a hard life even more believable.

A TV series adaptation of Caleb Carr’s 1994 best-selling novel executive-produced and directed by Cary Fukunaga (True Detective) was almost certainly going to draw major attention. Unfortunately, Fukunaga moved on but TNT moved forward with what appears to be a surprisingly ambitious project for the network.

A period piece about a serial killer in 1890s New York, the psychologist trying to figure him out and a journalist tracking the story is something we might expect to see on FX, AMC or one of the premium cable networks. But with a cast that includes Daniel Bruhl, Luke Evans and Dakota Fanning, The Alienist still looks like strong prestige television. The 10-episode series is set to premiere this fall.

We already getting an entry in the “female Hangover” category this summer with Rough Night. But Girls Trip looks like it could be more fun, less dark (no dead guy!), and maybe just the right amount of raunchy with its story of a group of women heading down to New Orleans for a weekend of fun and frivolity. The cast led by Queen Latifah and Jada Pinkett Smith also appears to have better chemistry, which can go a long way in making a comedy enjoyable. This could be the sleeper hit of the summer.

After skewering tennis with the sports mockumentary 7 Days in Hell, Andy Samberg returns to HBO with The Lonely Island to take on the drug-fueled world of cycling with Tour de Pharmacy. Cycling may not be as rife with doping as this spoof implies, but it certainly seems that way, given how much these sorts of scandals dominate the headlines. Figures that we previously held up as inspirations and heroes turned out to be lying cheaters. In other words, cycling is ripe for parody and HBO is clever for taking a comedic look at sports alongside their outstanding documentaries and investigative news programs.

Blade of the Immortal – TBD

Legendary (and infamous) Japanese filmmaker Takashi Miike making a movie based on an acclaimed manga would presumably draw a whole lot of fanfare and attention from film lovers and graphic novel fans. But Blade of the Immortal seemingly dropped out of nowhere, premiering at the Cannes Film Festival as an out-of-competition entry with a trailer quietly debuting online. It deserves a splashier debut than that.

Blade of the Immortal could be the epic samurai film of our time, following a warrior who is cursed with immortality and fights evil in an attempt to save his soul and to seek revenge on those who prey upon the innocent. No word yet on when this will premiere in U.S. theaters, but hopefully either a wide audience has a chance to see this one or it’s made available in on demand and digital streaming formats.

Brie Larson finally has a follow-up worthy of her winning a Best Actress Academy Award (with all due respect to Kong: Skull Island and Free Fire, which allowed Larson to find the action star within her before she takes on Captain Marvel), starring in the adaptation of the best-selling memoir by Jeannette Walls. She reunites with director Destin Daniel Cretton, with whom Larson had one of her best performances in 2013’s Short Term 12.

As a prominent New York columnist and author, Walls surprised many in telling the story of her dysfunctional family and unusual upbringing, living in poverty, moving from town to town, and ultimately trying to get away from her father and the debilitating influence he had on his children. Away from the bulk of summer blockbusters, perhaps this could reach a big audience in late summer.

Much like Kristin Stewart, Robert Pattinson has tried to get as far away from Twilight as possible in his recent movies, choosing more challenging roles in smaller films that should get him taken more seriously as an actor. Good Time could be his best effort yet, based on this trailer.

Is it a crime film, a commentary on the criminal justice system, or maybe a more intimate story about the bond between two brothers and what one will do to save the other? Directed by Joshua and Benny Safdie, this entire story is supposed to take place over one night.