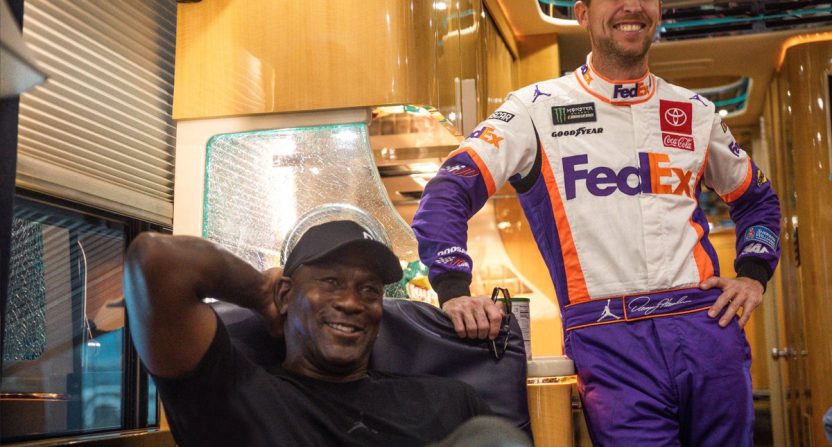 One of the top current NASCAR drivers and one of the greatest NBA players ever is getting in on NASCAR team ownership. Denny Hamlin revealed on social media that he and Michael Jordan will own a single car Cup Series team in 2021 with Bubba Wallace as the driver.

Tonight, I’m excited to announce MJ and I are starting a new, single car @NASCAR Cup Series team for 2021. Deciding on a driver was easy – it had to be @BubbaWallace. pic.twitter.com/nIJv0X6ZOX

Michael Jordan quote on becoming a NASCAR team owner with Denny Hamlin and hiring Bubba Wallace as their driver: pic.twitter.com/XDufeB0KBn

This is a unique, once-in-a-lifetime opportunity that I believe is a great fit for me at this point in my career. I’m grateful and humbled that they believe in me and I’m super pumped to begin this adventure with them.

For the past month, this was one of those rumors that was floating out there but many were hesitant to believe. MJ is a lifelong NASCAR fan, is friends with Hamlin, and has been to races but being a fan and being a team owner are two different things. And given it’s so difficult to win in NASCAR, that might be tough for someone who was so used to winning as a player.

Hamlin didn’t reveal much other than he, MJ, and Bubba would be teaming up but recent speculation has them possibly taking over the assets and a charter of another team and obtaining factory support from Toyota. At the same time of the Hamlin/Jordan/Wallace announcement, team owner Bob Germain announced that he sold Germain Racing, no doubt fueling speculation that the two stories are connected.

As far as Wallace is concerned, this was a total wild card destination of potential places he could’ve ended up in 2021. Richard Petty Motorsports wanted to keep Wallace on as a driver but he revealed he was leaving after this season. With a bunch of sponsorship at Wallace’s disposal, the team should have adequate funding on par with some of the top teams in NASCAR.

The Hamlin/MJ team announcement caps off a jam-packed day of NASCAR news. From Ross Chastain being named driver of Chip Ganassi’s #42 to Texas Motor Speedway reportedly getting the All-Star Race in exchange for giving up a Cup date to Circuit of the Americas to Hailie Deegan and her father Brian saying COVID-19 was a “hoax,” it was certainly an…interesting day in the sport.