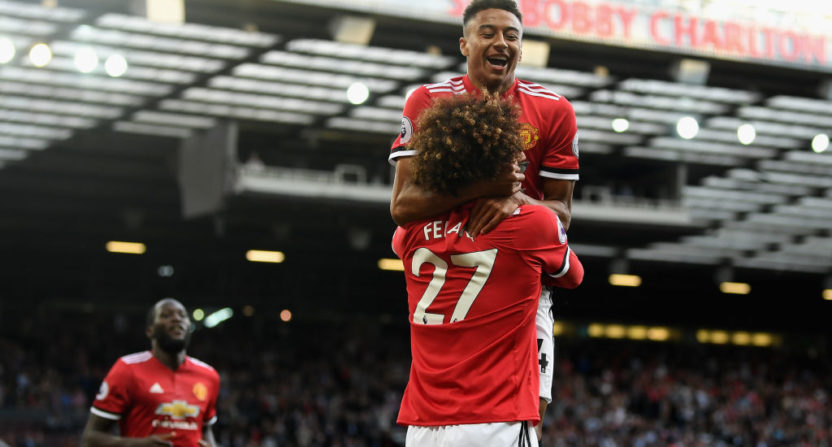 In the four years after Sir Alex Ferguson retired, Manchester United finished in the top four exactly once. For a team that had never gone more than three years without winning the Premier League, missing the top four in three out of four seasons was almost unheard of.

“Man United finished the season on 81 points. The league table does lie!”

“It’s the biggest conundrum I think since we’ve started doing this show.”

Instead, Manchester United have just completed one of the most bizarre seasons in Premier League history. It was a season where they returned to the top four, won more points then every team but one, had their highest point total since 2012-13 and is still somehow almost universally considered a failure.

Ordinarily a team jumping from sixth to second would be considered progress and something they could build on heading in to next season. But this United team is different and it doesn’t seem like there there will be much to build on for next season.

From a strategy standpoint, this season seemed like a very win-now season for Manchester United. The signings they made, bringing in 29-year-olds Nemanja Matic and Alexis Sanchez, were clearly an indication that the team was only thinking about today and not tomorrow.

This strategy isn’t to be unexpected though. Mortgaging the future for the here and now is exactly what you sign up for when you sign Jose Mourinho. He’s a man that sells himself based on results, not player development. Furthermore, in every previous stop of his career, he’s won the league in his second season. This was his second season, when he was supposed to win the league.

Only United didn’t win the league, nor did they even come close. Yes, Manchester City and their 100 points were better than anyone had ever been before, but United’s 81 points would have been enough to mount a legitimate title challenge in just one of the past six seasons.

Mourinho can still spin this season, and he will. United can, and probably will, win the FA Cup in which case Mourinho can say he won a trophy and finished second. Winning the FA Cup would keep the number of seasons that United haven’t won any silverware at a whopping one in the past 13 seasons (that’s if you count Community Shields and believe me, Mourinho does). He’s in the business of getting results and United got them.

But Mourinho didn’t even really get results. Yes, he had a 3-2 come from behind win against City but United also dropped points against five of the bottom six teams and was the only team to lose to all three newly promoted sides.

Perhaps the reason why it’s so hard to figure how United finished with 81 points is because for the past eight months, the team has rarely been fun to watch. When Mourinho came up last decade, this kind of football was enough to get results and change the way the game has been played. But teams have adapted and the styles have changed and Mourinho is getting left behind.

It seems like you can’t be successful playing this way anymore. Defense isn’t as important if you can score. What do Man City, Real Madrid, Barcelona, Liverpool, and Bayern Munich all have in common? They all have suspect defenses if you put pressure on them, but it doesn’t matter because they attack and keep attacking. Not surprisingly, they’re also the best teams in the world. Meanwhile, Mourinho couldn’t even beat Sevilla who have an awful defense.

The way Mourinho handled his team this year makes the future look very bleak for United. Anthony Martial had 11 goals and eight assists in all competitions before Mourinho signed Alexis, essentially dropping him from the squad. He had one assist since, compared to the much older and proven Alexis’ three goals and four assists.

While the media focuses on how United are going to have to close the gap for City, United have to be more worried about not falling out of the top four.

Liverpool, who this year became about the 100th team to remind us that not only are the best signings usually aren’t the most expensive, but that it’s also almost never a bad idea to sign a player Jose Mourinho has once sold. They are already bigger title favorites than United next season and they’ll be adding Naby Keita to their squad next year.

If Tottenham adds some depth they can be right there too. Chelsea is currently a bit of a question mark but if Arsenal add a manager that earns the players trust and respect, they could easily be right back in the equation next year.

Meanwhile, what do United have? Martial basically has two feet out the door. So does Luke Shaw. Ander Herrera and Marcus Rashford are both rumored to be seeking more regular first team football and will go elsewhere if they have to. Marouane Fellaini is out of contract, though many United fans are likely happy about that. Mourinho still has no idea how to use Paul Pogba and it wouldn’t shock anyone if he sold him despite paying a record amount for him less than a year ago.

That would be a departure of nearly all the youth at the club. And who would replace them? The only youth player that broke through this year was Scott McTominay who is just so average and was really just a pawn in Mourinho’s war against Pogba.

If you’re a Liverpool fan right now, you have to be excited for the future. 75 points, a spot in the Champions League final, a superstar up front, and a manager who knows how to bring youth into the squad to keep it fresh. That’s a season you can build on.

For Manchester United fans, it feels like the club put all their chips in the middle of the table this season and lost. At the moment, it’s hard to be optimistic about the team’s chances for contending for the title next season.

And that would make this season a failure, no matter what happens this week.