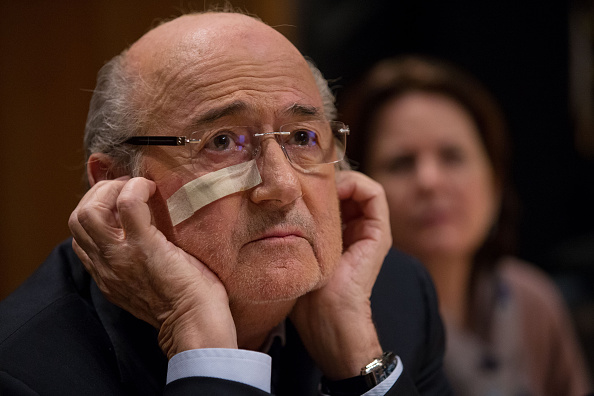 Sepp Blatter, the 79-year-old exiled former FIFA president, has long denied corruption and bribery allegations. In fact, he’s never admitted to wrongdoing of any kind as the investigative nooses continue to tighten around his neck.

Instead, Blatter has taken to blaming others for the corruption happening all around him (and even from him) as he takes his final laps through the media before a February vote to replace him and take up his now eight-year ban from soccer’s governing body.

He spoke to the Wall Street Journal on Wednesday, and as one would expect — all of this is everyone else’s fault and there’s nothing to all these investigations and bribery payments involving now banned UEFA president Michel Platini.

Blatter believes it is all a conspiracy and the eight-year bans handed down to him and Platini are “nonsense”.

Both men received eight-year bans Monday, plus fines. But Blatter’s was only 50,000 francs to Platini’s 80,000 francs. “He’s a little more expensive than I am,” Blatter said, laughing. “But this is nonsense. According to Swiss law, to suspend someone for eight years, you must have committed a murder or a bank robbery.”

Perhaps the richest of all Blatter’s ramblings following his ban, is his assertion that Platini and him had a good laugh on the reaction of the outside world if UEFA’s president through his support behind Qatar’s bid for the 2022 World Cup — something he had been on record as being against.

“ ‘Careful. If we vote for Qatar, the next day everyone will say that FIFA sold itself out.’ He (Platini) told me that,” Blatter added. “And then a week later, he says something changed.”

Blatter does attribute Qatar’s win of the 2022 World Cup over the United States’ bid to not corruption but to two big factors:

Platini’s decision to throw his support behind the Qatari bid, and a deal between representatives from Spain and Qatar that Spain would vote for Qatar’s 2022 bid in exchange for Qatar’s support for its joint bid with Portugal to host the 2018 World Cup.

Yes, it was that and not a mountain of cash payments and bribes that did it — it was a gentleman’s agreement (that didn’t include payments ‘wink, wink’) and UEFA’s president suddenly switching support at the last minute.

It couldn’t have been corruption at all!

Even pressure from big global corporations like Coca-Cola and McDonald’s hasn’t phased Blatter in the face of all this controversy. He believes it’s just American companies and the rest of the world is lining up to be a part of what FIFA has going on.

“Companies, commercial partners are queuing up to get in,” he said. “If the Americans want to leave, others will come. But they don’t want to get out. They won’t leave.”

Never mind the unified statements from the global sponsors or most of the money drying up if those companies take their ball and go home. Blatter thinks that another company with even more corrupt ties to corrupt governments will likely step in?

Talk about senile — that’s exactly what Blatter appears to be as the hole around him gets deeper and deeper.

While the world is unlikely to know the full extent of corruption, bribery and downright criminal behavior of Blatter and most of FIFA’s top executives over the past two decades, getting them gone sooner than later is paramount.

Even on the way out, facing a mountain of damming evidence, Blatter and others continue to deny and deflect any wrongdoing. It is that defiance and tone-deaf nature that is so scary and exactly why these guys have to be gone to save soccer.