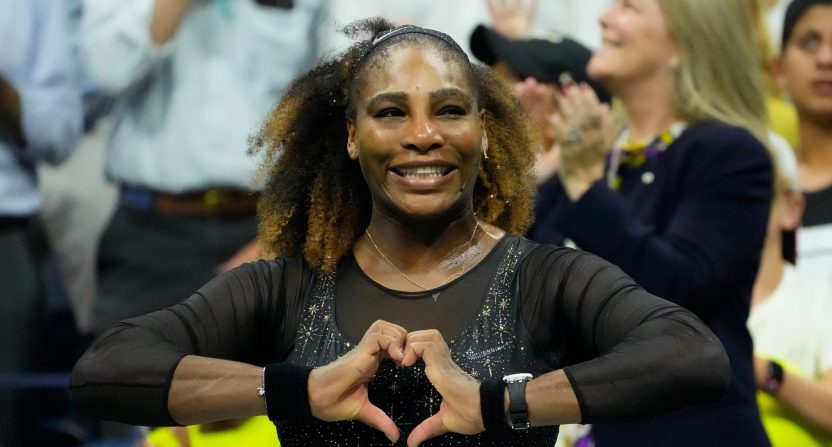 Monday marked the beginning of the US Open for Serena Williams, who had previously announced that she’ll retire at the end of the tournament to focus on her family. And Serena’s illustrious career will last at least one more match.

The 40-year-old Williams staved off retirement in Monday’s match against Danka Kovinić, defeating her in straight sets with a 6-3, 6-3 win.

In a packed house at Arthur Ashe Stadium in Flushing, every member in the crowd was in support of Williams, including some high-profile guests like former President Bill Clinton, Mike Tyson and Billie Jean King.

Many on social media reacted to Williams dominating win, including a few wondering why Tyson was sitting next to tennis legend Martina Navratilova (and her dog).

Could have been her last match ever but she won and will continue on. Can’t help but compare this to Kobe’s last game. I hope she wins the 2022 US Open to seal an amazing career! Thank you, Serena Williams! Love, all of us. 💕 pic.twitter.com/VKmUTEaIBi

Really magical to watch ⁦@serenawilliams⁩ win tonight at ⁦@usopen⁩. No matter what happens rest of the tournament she, to me, is the greatest athlete ever, for so many reasons. #goat pic.twitter.com/bYocke5ISt

How many other events could give us Mike Tyson sitting next to Martina Navratilova (and her dog)? pic.twitter.com/hGoqmFT71v

When speaking to Gayle King on the court after her victory, Williams said she was just do the best she can out there, citing her comfort level with the environment.

Her win comes only a few months after the 23-time major champion lost in the first round at Wimbeldon to Harmony Tan in a major upset.

Although tonight was a historic night for tennis’ greatest player ever, Williams will have a tough task ahead of her against the No. 2-seeded Anett Kontaveit on Wednesday.