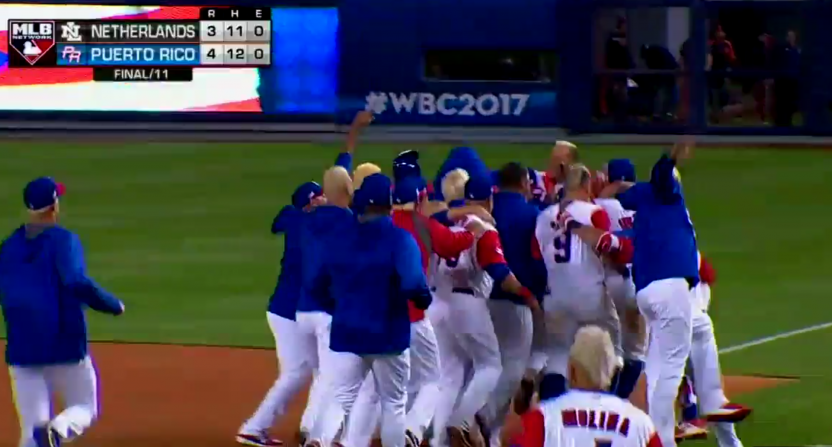 Drama, drama everywhere, and of all different kinds, too. Monday night gave us a walk-off win in the World Baseball Classic, a fight in the NBA, some major upsets in the women’s NCAA Tournament, and a ridiculous murder story that sounds like something out straight out of Hollywood. So you may wanna sit down before diving into Tuesday’s Cheat Sheet.

It took 11 innings, but Puerto Rico finally broke through to end a 3-3 tie against Netherlands and advance to the World Baseball Classic finals, and it all came down to the new funky rules that put runners on first and second base to start every inning from the 11th onward.

That allowed Puerto Rico to bring home the winning run without a hit, a walk, or even an error. After a successful sacrifice bunt and subsequent intentional walk, Eddie Rosario came to the plate with the bases loaded and one out. His sacrifice fly was enough to score Carlos Correa easily from third.

What a finish in LA! We’re breaking it all down right now on #MLBTonight #WBC2017 pic.twitter.com/OXR5DNAhZl

Bring in the dancing lobsters!

While the extra innings rule makes the win feel a bit cheap, credit Puerto Rico for working out of the same situation in the top of the 11th without harm. Netherlands also had the bases loaded with one out after a sacrifice and intentional walk, but Edwin Diaz got Curt Smith to ground into a 4-6-3 double play, the Puerto Rico infield’s fourth of the night.

Starting three of those double plays, Javier Baez had himself another terrific night, going 2-for-4 at the plate with a walk as well.

Baez also pulled off a nifty move to avoid the tag while stealing third.

On the other side, Netherlands’ Jurickson Profar had a not-so-smart lowlight. With a man on second and one out, he singled to right. After the throw came in to the plate, Yadier Molina caught Profar celebrating off the bag at first base.

So Profar’s mistake meant this bomb by Correa tied the game 2-2 in the bottom of the first instead of cutting Puerto Rico’s deficit to one.

There’s a good chance this game turns out very differently if Balentien’s homer in the first winds up being a three-run shot. (Maybe Jorge Lopez pitches to him differently with two men on instead of one and that homer never even happens.)

But losing a run like that in an elimination game that went to extra innings stings. A lot.

On Wednesday, Puerto Rico will face the winner of tonight’s semifinal between USA and Japan.

Steph and Russ’ tempers flare up 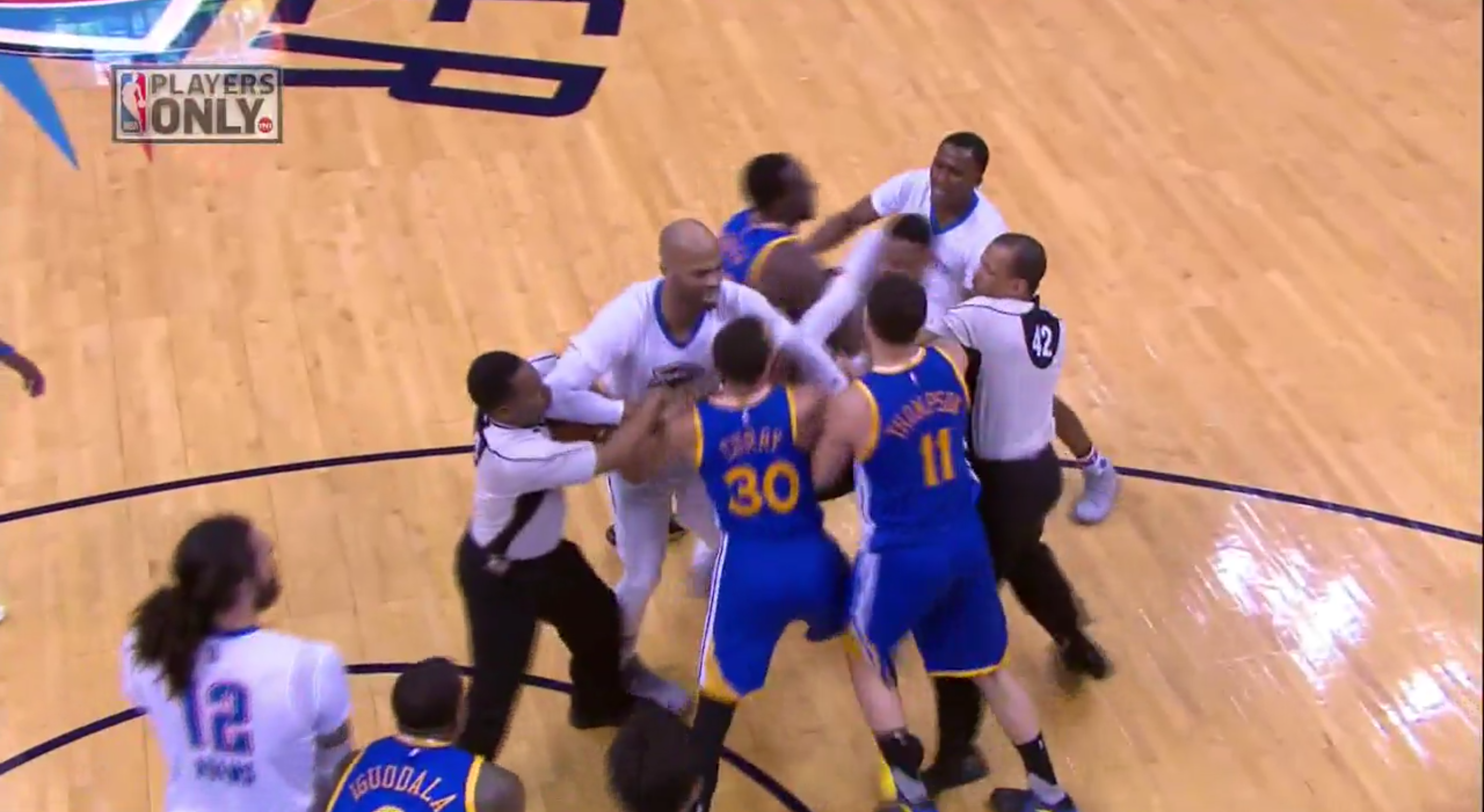 The Warriors-Thunder saga continues as Steph Curry and Russell Westbrook started a fight during Monday’s matchup. Golden State won easily, 111-95, but this is the clip everyone will remember.

Westbrook had his worst outing in over a month, posting 15 points on 4-of-16 shooting along with 8 rebounds, 7 assists and 5 turnovers. Meanwhile, Curry and Klay Thompson combined for 57 points and 14 threes

The women’s NCAA Tournament finally has some Cinderellas!

You can’t harp on the women’s NCAA Tournament being all chalk this year. On Monday, No. 12 seed Quinnipiac upset No. 4 seed Miami and No. 10 seed Oregon knocked off No. 2 seed Duke, putting multiple double-digit seeds in the Sweet 16 for the first time since 2012.

The ACC got 16 total teams into the two NCAA Tournaments, and now only four are left. Two of those remaining, the North Carolina men and the Notre Dame women, are No. 1 seeds that nearly lost to No. 8 seeds in the second round.

Duke haters are surely thrilled that neither the men nor women reached the second weekend this March.

While Oregon draws a tough matchup against No. 3 seed Maryland, which has won six straight games by an average of 22.5 points, Quinnipiac faces No. 1 seed South Carolina, which looked vulnerable in a 71-68 second round win over eighth-seeded Arizona State.

—In other women’s basketball action, Washington guard Kelsey Plum set the single season record for most points, dropping 38 points on Oklahoma to reach 1,080. Plum averages 32 points per game, so she should become the first player to ever score 1,110 points in a season even if the third-seeded Huskies fall to No. 2 seed Mississippi State in the Sweet 16.

—On the men’s side, the NCAA Tournament is the most-watched in 24 years.

—In one of the wildest stories ever, former Patriots tight end left his friend, who was an eyewitness to Hernandez’ alleged double murder in 2012, for dead. That friend has now testified against him in court, but his original goal was to kill Hernandez.

—Adam Silver is sick and tired of NBA teams resting their stars. That won’t be a problem for James Harden.

—Illinois made a home-run hire by luring Brad Underwood away from Oklahoma State.

—In other college basketball coaching news, VCU’s Will Wade is headed for LSU, Cuonzo Martin was officially introduced at Missouri, and Clemson announced Brad Brownell will return after missing the NCAA Tournament for the sixth straight year.

—Rex Ryan’s ESPN salary will basically be paid to the Bills.

—Animal control officials in Colorado confiscated a family’s dog because they thought it was a wolf. Turns out, it was actually just a dog. Oops.

—Illinois State, a really good mid-major that many people got snubbed from the NCAA Tournament, didn’t do its perception any favors by blowing an 18-point lead and losing in the second round of the NIT.

—The NFL is considering cutting overtime down to 10 minutes and making referees full-time employees.