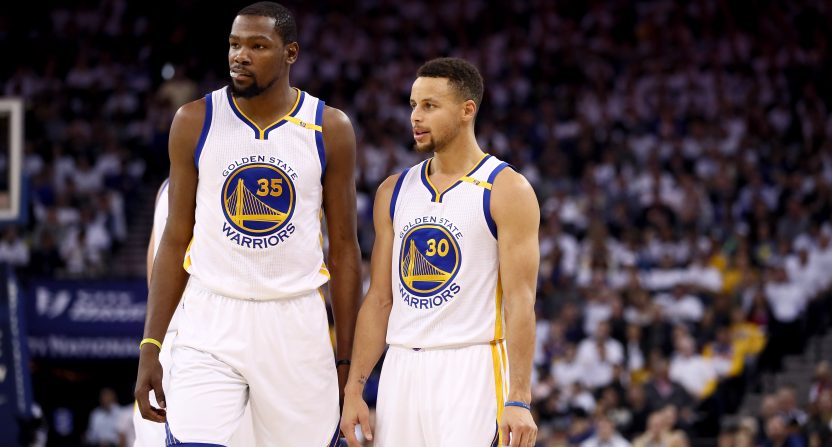 There was a ton of great NBA and MLB action on Monday. In the NBA, teams continued jockeying for playoff position as the Celtics moved into the No. 1 seed in the East. Meanwhile, several MLB teams had their home openers, giving us everything from the Cubs finally hanging their World Series banner to the Mariners selling out toasted grasshoppers.

Now let’s dive in to the Tuesday Cheat Sheet.

Finally, the Warriors have all their key pieces healthy. While Klay Thompson sat out of Monday’s loss to the Jazz for rest, Curry and Durant reunited on the court for the first time since Durant sprained his MCL in late February. Durant returned from injury on Saturday, but Curry missed that game with a knee issue.

Again, the Warriors were not at full strength with Thompson on the bench. But Curry went off for 28 points on 16 shots while Durant flirted with a triple-double, posting 16 points, 10 rebounds and six assists.

The Warriors lost 105-99, which isn’t important for them as they’ve already had the No. 1 seed in the West wrapped up for about a week. But that’s a huge win for the Jazz as they stay alive for home court advantage in the first round of the NBA playoffs. With the Clippers also beating the Rockets on Monday, they and the Jazz are tied for fourth place, but the Clips have the tiebreaker.

All Los Angeles needs to get the No. 4 seed and home court advantage is to beat the Kings on Wednesday. The Jazz need to beat the Spurs and  hope the Clippers lose. Either way, those two teams will be playing each other in the first round. It’s just a question of who would host a decisive Game 7.

Celtics move into No. 1 seed as Cavs blow another 4th quarter lead 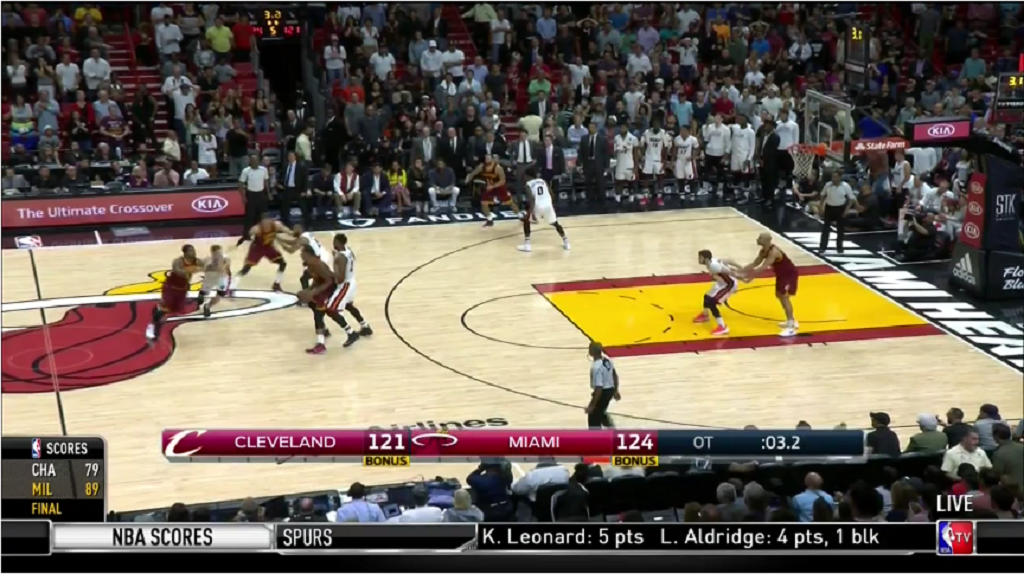 It happened again. Fresh off blowing a 26-point lead to the Hawks on Sunday and losing in overtime, the Cavs blew a 14-point lead against the Heat and lost again in overtime.

Back when the Cavs were thrashing the Hawks through three quarters, they appeared on their way to the No. 1 seed in the East. Now they find themselves a game behind the Celtics, who beat the Nets on Monday, for that top spot.

The Cavaliers can now only get the No. 1 seed with a win over the Raptors and a Celtics loss to the Bucks on Wednesday. That’s far from impossible, but it’s unlikely.

So Monday was a win for all the LeBron haters who exist for God knows what reason.

Wil Myers hit for the second cycle in Padres history 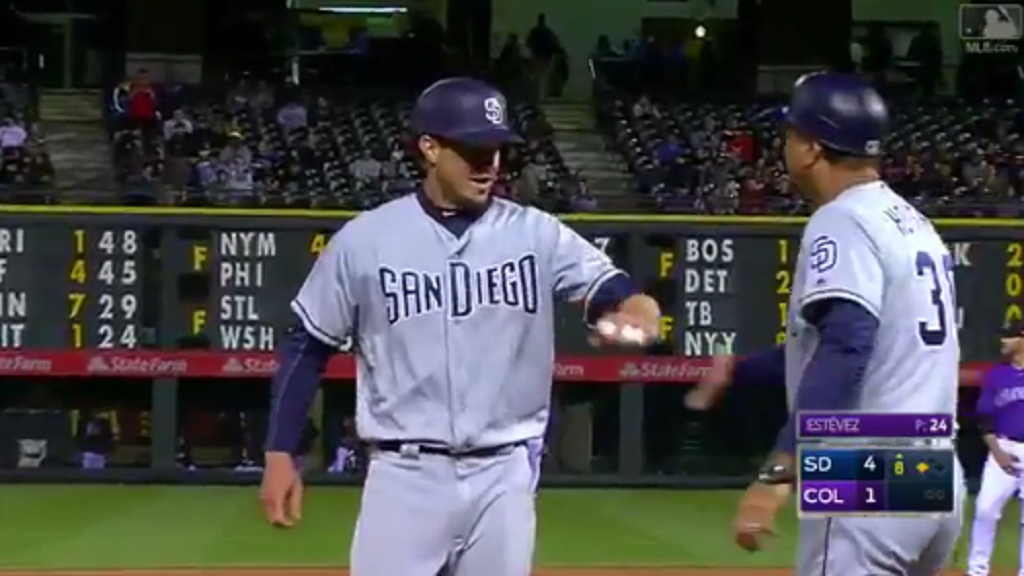 Wil Myers is really starting to live up to his billing as one of the top MLB prospects from earlier in the decade. He’s off to a great start following his breakout 2016 season and continued that Monday night by going 4-for-4 and hitting for the cycle against the Rockies.

On top of that, San Diego beat Colorado to improve to 4-4. Enjoy the .500 record while it lasts, Padres fans.

Myers only the second Padres player to ever reach that milestone, and to be fair he had some help with Coors Field being a hitter’s park.

So props to Wil Myers on hitting for the cycle, but that’s a crazy piece of trivia about the home of the Rockies. The only other Padre to ever hit for the cycle was Matt Kemp, and he did it at — wait for it — Coors Field, too. 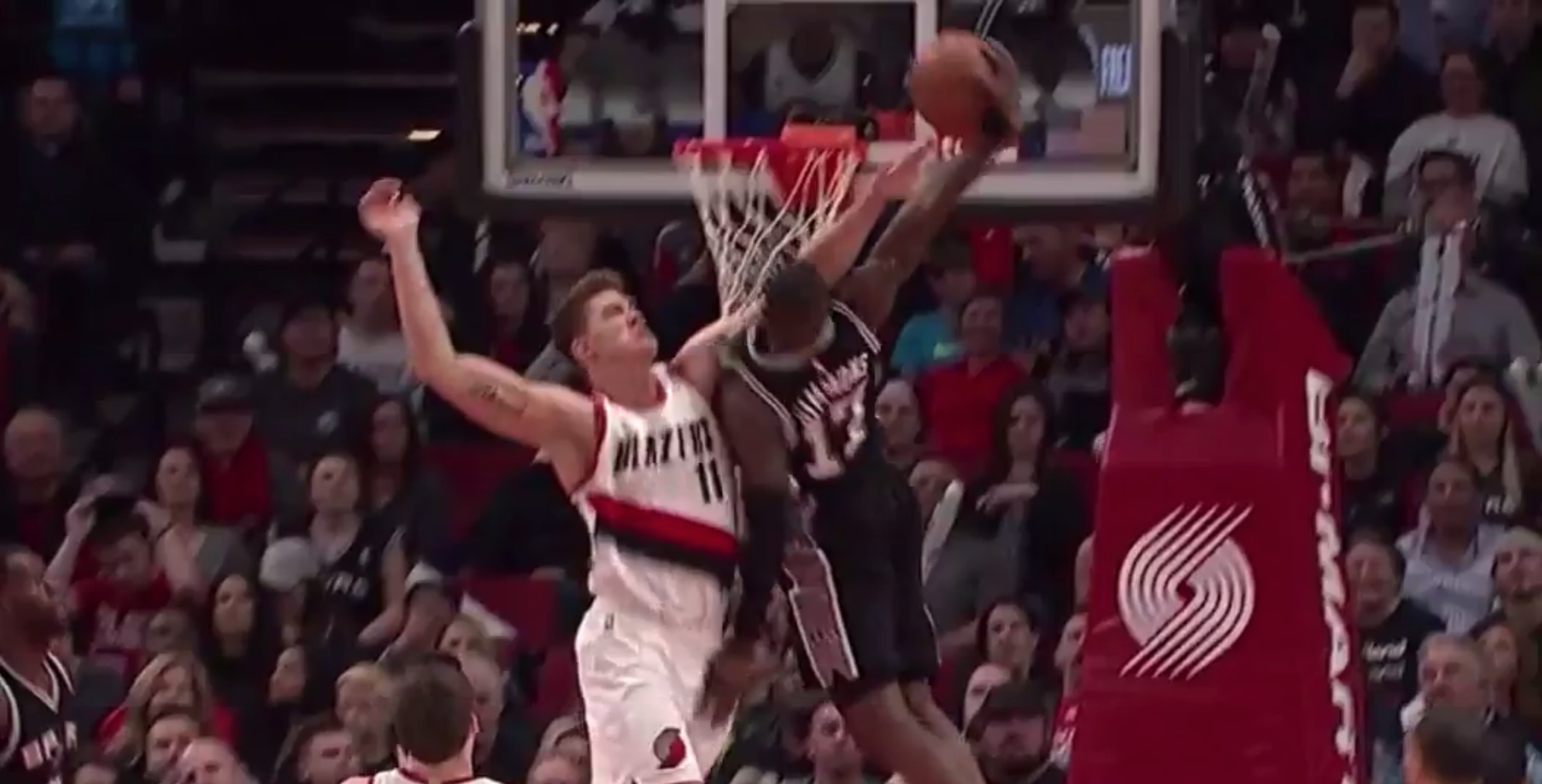 —The Spurs played a meaningless game against the Blazers, but that didn’t stop Johnathon Simmons from getting the highlight of the night.

—Steve Fisher, who coached the “Fab Five” at Michigan and then built San Diego State into a Top 25 program, has retired.

—And three NHL coaches got axed on Monday.

—What’s the link between the United Airlines fiasco and Kendall Jenner’s terrible Pepsi ad? United’s CEO used to work for Pepsi…and he was once named “communicator of the year”!!—I guess now that the Cubs actually win games, Wrigley Field has become a pretty romantic spot.

—The Cubs also got to raise their World Series banner before a 3-2 walk-off win over the Dodgers in their home opener.

—The Mariners unleashed a wacky new ballpark food item — toasted grasshoppers — and they quickly sold out.

—Noah Syndergaard is a national treasure.