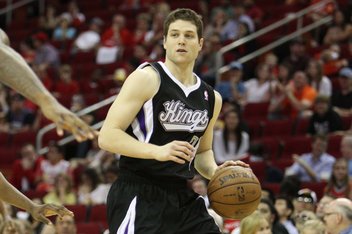 When the NBA offseason reaches this time of the year — somewhere stuck between late free agent signings and the anticipation of the start of training camp  — trade rumors start swirling around and leaving debris of speculation in its wake.

We officially have touch down in Sacramento with a number of reports involving Jimmer Fredette.

Apparently Fredette’s future with the Kings is up in the air and appears, as of now, that while the organization is not pushing to trade the former 2011 National Player of the Year, they are eager to pick up the phone when teams around the league make the call and inquire about his availability.

Clearly the situation in Sacramento is not ideal as the organization spent the majority of last season juggling Fredette between running the point and positioning him as a straight-shooter, resulting in a very up and down season for both Jimmer and the Kings in general. And while the extreme Kings make-over of new ownership, the front office and coaching staff could actually benefit Fredette, there is a better chance that his fresh start entering his third season in the league could be better achieved my a complete relocation.

Keep in mind, this is not the first time Fredette’s name has been associated with a trade.

In 2012, there was much talk that the Los Angeles Lakers and Utah Jazz should make a play for him. Sacramento reportedly continued to dangle Jimmer in the draft back in June, leaving Fredette to play the professional when asked about his future with the Kings and adjusting to trade speculation.

“You don’t pay attention to it,” Fredette said of the rumors. “You just worry about being a better basketball player and then whatever happens in the future, that’s something you can’t control.”

But the thing is, there is no choice but to pay attention to “it”.

At the end of the day the “B” in NBA might as well stand for “Business.”

With the Kings in full revamp mode to help better their business, they are analyzing all areas and ways to improve the organization, particularly when it comes to the roster. Along with Jimmer, Sacramento features backcourt options of Ray McCallum, Ben McLemore, Isaiah Thomas and Marcus Thornton.

So where exactly does Jimmer Fredette fit in with the Sacramento Kings?

Probably on the outside looking in.