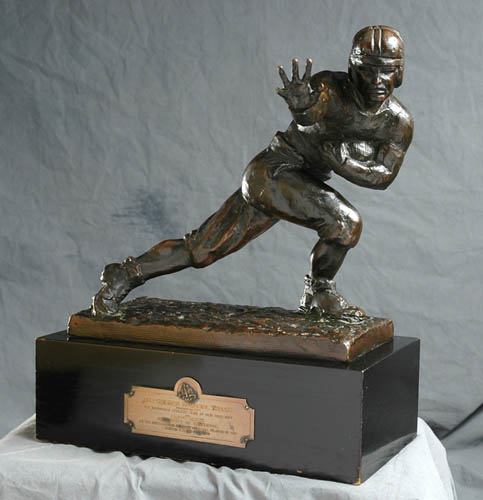 Week four of the college football season is in our rearview mirror. Believe it or not, that means we are one-third of the way through the regular season. Last year, Robert Griffin III staked claim to the Heisman Trophy on Nov. 19 when he hit a home run strike to Terrance Williams to lead his team to an upset win over the Oklahoma Sooners. Whose name will rise to the top this year by having a "Heisman Moment?"

*The top five total vote getters and quotes from bloggers in support of their candidates.

*Poll notes that look at some of the interesting facts, figures and trends of the poll.

*The BHP Roll Call of voters, the links to their respective blogs and their twitter accounts. 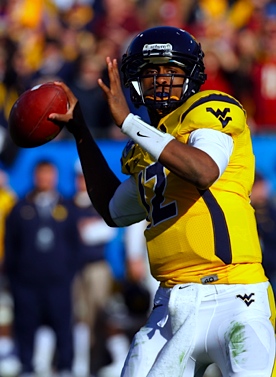 This Week: vs Baylor

*Right now, there's only one viable candidate, and that's Geno Smith of West Virginia. He's led the the Mountaineers to a #9 ranking and a 3-0 record while throwing for 1072 yards. He's completed 81% of passes, thrown 12 tds without an interception. He has a great stage in the next couple of weeks with big games against #25 Baylor and #12 Texas. In fact, in his next 7 games he'll face five teams currently ranked in the Top 25.

*At this point, no player has been more impressive than the West Virginia quarterback. He ranks second in the nation in passing – despite having played one less game than most of his competitors – at 1,072 yards. He also ranks second in passer rating. Not to mention, he leads the nation with an alarmingly good 81.4 completion percentage. A 12-0 touchdown-to-interception ratio doesn't hurt either. If Smith keeps up this pace, at the end of the season he will have some hardware to show for it.

*Every Heisman winner has a signature game or two that sort of seals the deal. Collin Klein just had one against Oklahoma, and if he has another one and leads the Wildcats to a Big 12 title, the conference will have its second-straight Heisman winner.

*I don't really know how the Wildcats actually win games. I do know that their throwback QB Klein is at the heart of their success, even if I can't explain it.

This Week: at Michigan State

*Is there another player more "valuable" to his team than Miller? Without him Ohio State could very well be staring at a 2-2 record if not for him taking over at key moments against Cal and UAB in the past two weeks. He's already accounted for 14 total touchdowns and and has nearly 1,200 yards of total offense. He's the most dynamic player in the country for my money.

*I know his stats aren't quite at the level of others, but frankly, I don't care. I've watched every Ohio State game, and can unequivocally tell you this: Without Braxton Miller playing quarterback, not only would Ohio State not be undefeated, they might not even be at .500.

This Week: at USF

*First ballot of the year and I'm picking a conference guy at the top. Why? First, we haven't really had a solid guy in the ACC for some time now. Second, while I like Geno Smith, WVU was in a tight one with Maryland….Maryland, folks…while Manuel survived probably his hardest matchup he will see all year against Clemson. He did it in the air and on the ground. Outside of the UF game at the end of the year and maybe *sigh* VT in Blacksburg, this team can put up some EA NCAA numbers this year.

*The Fighting Irish's fast start has proven to be one of the biggest stories of the young season, and Te'o is the bedrock of a surprisingly stout defense. Despite heavy personnel losses, the Irish D has been even better than expected with its nearly unblockable star linebacker wreakving havoc all over the field.

This Week: vs Tennessee

*Jarvis Jones was a one-man wrecking crew in the 4th quarter of the Missouri game. In under one minute of game time he intercepted a pass and took it back to the Mizzou one yard line and then three plays later he sacked James Franklin which caused a fumble and set up another TD run. Jones is a special player who has an undeniable impact on the game.

–Last year after four weeks, RG3 was #1 in our poll. That bodes well for Geno Smith.

-In that same poll, Marcus Lattimore was second in the voting. That doesn't bode so well for Collin Klein.

-Another negative for Collin Klein, at least for next weeks poll, is that the Wildcats don't play and typically players lose momentum while they sit out. Manti T'eo and the Notre Dame Fighting Irish are also idle this week.

–Out of all players receiving votes, five play QB, two RB, and two LB. The top four vote getters are all QB.

–Two of the pre-season favorites to win the award, Matt Barkley and Montee Ball, did not receive a single vote in our poll this week.

-Geno Smith and the Mountaineers make their Big 12 debut this weekend and it's against a Baylor Bears defense that ranks dead last in the Big 12 in total defense and scoring defense.

– Braxton Miller and the Buckeyes head out on the road for the first time this year and will face the #1 defense in the Big Ten in terms of total defense and scoring defense.

-EJ Manuel and the Seminoles will take on the USF Bulls. The Bulls rank next to last in total defense and scoring defense in the Big East. They also lost to Ball State last week.