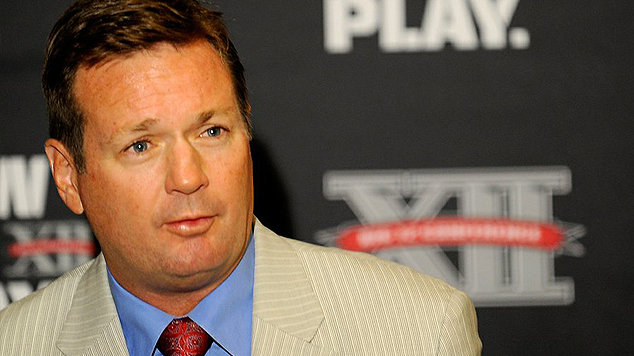 While all the focus in the college football world is at Penn State Monday morning, there is other business to address for the rest of the sport. And no place is that more evident than in the Big XII, where the conference will host their Media Days on Monday and Tuesday.

And while the SEC got the Media Days got college football off to its unofficial start last week, it’s hard to argue that their friends in the Midwest will have just as much to talk about when their coaches and players get together in Dallas, TX this morning. With two new schools entering the conference, plus the usual excitement and interest from places like Oklahoma, Texas and Oklahoma State, the gathered media will most certainly have plenty to write, and even more to discuss in the days to come.

So what should you watch out for when Big XII Media Days kick off in Dallas on Monday?

What will the reception be for Landry Jones?

Question: Has there ever been a player who has accomplished more that has been criticized equally as much Landry Jones?

Frankly, the answer is “probably not.” For a player who owns 13 schools records, is Oklahoma’s all-time leading passer and is 3-0 in bowl games, Jones has gotten a surprisingly large amount of heat from the media and college football fans in general over the last couple years.

Last year was certainly the best example, as Oklahoma entered the season as a National Championship favorite and not only didn’t play for a title, they didn’t even win the Big XII either. And while the loss of Ryan Broyles hurt, there’s little doubt that the Sooners struggles were in large part due to Jones regression during his junior year. For a guy who threw for a spectacular 38 touchdowns and 12 interceptions as a sophomore in 2010, his numbers dipped to just 29 touchdowns and 15 interceptions in 2011. Most importantly, Jones was unspeakably bad down the stretch, throwing one touchdown and six interceptions in Oklahoma’s last four games, leading Oklahoma to just a 2-2 record during that period. Those losses not only knocked only out of the BCS title discussion, but also a BCS bowl game all together. For a program which started 2011 with championship aspirations, ending the season at the Insight Bowl was not how they envisioned things.

And the crazy thing is, despite all the struggles Jones does have the talent to overcome things and lead Oklahoma to a big season in 2012. He is still projected as a top pick in next April’s NFL Draft, and by the time he leaves school this fall could literally have every single passing record in Oklahoma history.

Of course with Jones the questions have never been his numbers, but the consistency that comes with them.

We’ll find out starting this week if the mental part of Jones’ game is as strong as his physical capabilities.

Can West Virginia match the excitement around their program with on the field results?

It’s a fair question, and if you’re looking for positive signs, look no further than January’s Orange Bowl beat down of Clemson. In that game we saw how truly unstoppable West Virginia is capable of being under Dana Holgorsen, as the Mountaineers set college football bowl game records for points (70) and touchdowns (10), with quarterback Geno Smith setting his own bowl game records with six touchdown passes, and seven touchdowns total. And with Smith (31 touchdowns, 4,385 yards in year one under Holgorsen) and top receiver Tavon Austin (89 catches) both back, there’s little reason to think this offense won’t continue to hum.

Of course, there are concerns in Morgantown, for as good as the offense looked in that one particular game, it was a unit that was anything but great during the regular season. West Virginia started out just 6-3 overall, and even though they won their final three games of the season to get to the Orange Bowl, it’s easy to forget now that each of those victories came by a field goal or less. Not to mention that entering 2012 the Mountaineers will be breaking in an entirely new defensive scheme, and oh by the way, also enter an entirely new conference altogether in the Big XII.

Beyond that, the Mountaineers also have history to compete against, and frankly it’s not the good kind. This is a program that always seems to play their worst when the expectations are the best, and in recent years (2004, 2006, 2008) West Virginia has entered the season with high expectations similar to what they’re seeing in 2012, only to fall on their faces. Yes, this is a different team with a different coach, but what happens if or when this team loses a game they’re not supposed to? Can they staying focused?

Now granted, we’re not saying that West Virginia will be a flop in 2012. Just that everyone already writing them into 10 wins and a second place finish in the conference need to be very careful.

What about the other new team in the Big XII?

While West Virginia is getting all the buzz entering the 2012 Big XII season, there is another new sheriff in Big XII town, with TCU arriving as well, after completely and utterly dominating the Mountain West the last couple years. Since the start of the 2008 season, Gary Patterson’s boys are a staggering 47-5 overall, including an almost unbelievable 30-1 in conference play.

But with the step up to the Big XII, not only are there plenty of questions on the field, but the biggest ones might actually come off the field as well. As easy as it is to forget now, it was a tumultuous off-season in Ft. Worth, where in February, a campus-wide drug bust netted 17 arrests total, including four football players. Since then, Patterson has put a media embargo on his players, meaning that Media Days will be the first time anyone at TCU publicly speaks about the incident.

While we expect the response from TCU player representatives Casey Pachall, Stansly Maponga and Blaize Foltz to be relatively tame, it’ll be interesting to see how they respond none the less.

While coaches like Bob Stoops, Mack Brown and Holgorsen will likely garner the biggest crowds at Media Days, there are two other coaches who will be plenty interesting for two entirely separate reasons. The first is Texas Tech’s Tommy Tuberville, who enters the 2012 season firmly on the hot seat. The other is a guy who hasn’t coached a single game yet, but always garners attention: New Kansas head coach Charlie Weis.

For Tuberville, it’ll be interesting to see how he handles the first public discussion about his future job security this season. That’s because since taking over for Mike Leach back in 2010, it’s hard to argue that this program has gone in the wrong direction under Tuberville’s watch. The school went from eight wins in his first year at the school to just five in 2011, after an extended run of success under Leach that the school had never previously seen.

And what was even more troubling about 2011 in specific wasn’t just Tuberville’s record, but the way the Red Raiders played down the stretch. After stunning Oklahoma in Norman on October 22, Texas Tech went 0-5 in their final five games, allowing an average of 51 points per game over those five losses. If Texas Tech doesn’t improve, and improve quickly, Tuberville could be out the door by the end of this season.

Then of course there’s Weis, who has no hot seat issues, but who also seems to draw attention wherever he goes. And frankly, that’s not necessarily a good thing, as the former Notre Dame head coach and Florida offensive coordinator has burned bridges at every stop of his career, both with professional associates and in the media as well. In addition, the Kansas job will be his fourth different gig in four years, and his most recent- offensive coordinator at Florida- did little to salvage his reputation as a fading star in the coaching world. For a guy who was once considered to be an “offensive genius,” his team certainly didn’t look like it in 2011, as the Gators finished just 105th nationally in total offense, and bottomed out with a 21-7 loss to Florida State in Weis’ final game as coordinator. In that game, Florida accumulated just 184 yards of total offense.

Still, at the very least there is one thing you can’t deny about Weis: He does have a presence. After all, when was the last time anyone was excited (or at least intrigued) to hear the Kansas football coach speak at Media Days?

It’s been awhile and in essence, that is the Charlie Weis effect.

What will Mack Brown say about his quarterback situation?

Quite possibly the single biggest question about the entire Big XII this off-season is “Who’ll be starting at quarterback for the University of Texas come Week 1.” By all accounts David Ash was far and away the best option after spring ball, yet despite it, Mack Brown refused to name a starter between Ash and Case McCoy. Frankly, no one is quite sure why. Some have speculated that Brown’s insistence on staying mum a case of the media overestimating Ash’s abilities, while others believe it’s a sinister attempt by the coach to keep McCoy on campus just a bit longer as a back-up plan. Whichever is true, no one quite knows. But it might be a major discussion over these next couple days.

And what’ll be interesting, is to see how Brown handles the situation at Media Days this week. To the surprise of no one, Brown elected not to bring either quarterback with him, meaning that poor Jordan Hicks, Carrington Bydom and Mason Walters will be the ones stuck answering the questions about who’ll be under center. They won’t have answers (nor should they), but you better believe that they will be getting asked about the quarterback situation none the less.

As for Brown, expect him to continue to play coy; after all, if he hasn’t made a decision to this point in the summer, why tip your hand now?

Still, “Who’s under center at Texas” maybe be the single most fascinating question at Big XII Media Days this week.