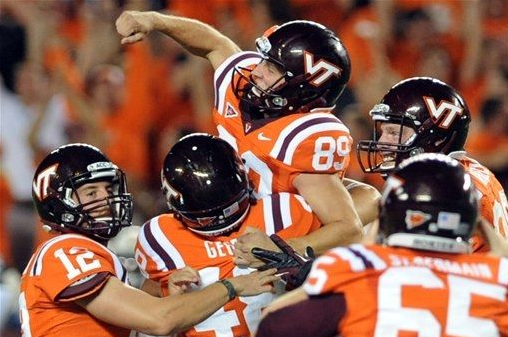 Well, was it worth the wait? The first weekend of college football is officially in the books. It opened Thursday night with a key SEC East division game and ended with a key ACC division game. Both favorites found a way to escape with a victory after South Carolina avoided an upset bid at Vanderbilt and Virginia Tech gutted out an overtime victory at home. Of course, both teams were mentioned in our first Upset Alert video of the year so the tightness of those games should not have been too much of a shock to our regular readers.

No. 16 Virginia Tech 20, Georgia Tech 17 (OT) (Recap) – Georgia Tech's upset bid in the key ACC battle Monday night was literally thrown away by quarterback Tevin Washington on the first possession of overtime. It was a rough night for Tevin Washington from start to finish. Under pressure and looking to get rid of the football, Washington made a poor decision to lob up a free football. The mistake could not have come at a worse time for the Yellow Jackets, as Virginia Tech's Kyle Fuller got his hands on the football for the interception on third down. The Hokies pushed their way up the middle of the Georgia Tech defense and set up an extra point distance field goal for Cody Journell, who had missed from 41-yards late in the fourth quarter.

Give Georgia Tech's credit for rising to the occasion despite being without three starting players. The Yellow Jackets defense held Virginia Tech to just 96 rushing yards, but gave up some big pass plays on the Hokies' final fourth quarter possession to set up a game tying field goal. Virginia Tech quarterback Logan Thomas ended the night with 230 passing yards and a pair of touchdowns.

We have to bring this up I suppose. USC, fresh off of two years of probation, is flirting with another potential scandal. According to a police probe, Los Angeles County assessor Scott Schenter admitted to giving cash and perks worth thousands to a pair of USC athletes while they were at USC, including former running back Joe McKnight (now with the New York Jets). Gregg Doyel suggests that USC athletes are easy targets, but that is no excuse for USC, who at the time of the allegations was about to be hit hard with a two-year postseason ban and reduction in scholarships. We will wait to see if anything comes out of this or not. Meanwhile, USC will continue to play for a BCS championship this season until further notice, and after week one things should be interesting as the Trojans fly to the east coast to take on Syracuse in MetLife Stadium.

We knew that without Kevin Sumlin (Texas A&M) and Case Keenum (Houston Texans practice squad) the Houston Cougars would have a different look this season, but this wasn't the look anyone could have expected after week one. Just 48 hours after losing to Texas State, 30-13, in the FBS debut for the Bobcats, offensive coordinator Mike Nesbutt resigned. After one game?

Northern Illinois also made a staff change with their offensive coordinator, although for a much different reason. Mike Dunbar's duties will be reassigned so he can focus on a battle with cancer. Our thoughts and support go to Dunbar through this tough battle.

Crystal Ball Run sources have confirmed that Bruce Feldman of CBSSports.com is a boss. Feldman reported last night that Florida State defensive end Brandon Jenkins is out for the rest of the season with a left foot injury. Florida State has since confirmed this news about the two-time All-ACC player and a fixture on the Seminole defensive line.

Michigan also suffered a tough blow in losing defensive back Blake Countess for the season.

Shots fired! Missouri defensive tackle Sheldon Richardson says Georgia plays like a Big Ten with "It's old man football." Georgia visits Missouri this weekend for their respective SEC openers, and Missouri's first SEC game. Georgia has won the only meeting between the two schools, but that was back in 1960 when actual old-man football was being played.

Tyrann Mathieu will re-enroll at LSU and is willing to pay his own way according to reports.

ESPN.com's Ivan Maisel discussed Bill O'Brien starting a new era at Penn State. If you have not read this story enough, why not do it one more time I suppose.

Some stats and facts from college football's opening weekend.

What would have happened if Mike Vick and Virginia Tech never came back to beat West Virginia in 1999, in The Miracle in Morgantown?

Photo of the Day

Everything about this image is so Mississippi State…

Our friends at Coaches by The Numbers dropped an interesting stat last night after Virginia Tech's victory over Georgia Tech.

The following video has been rated PG-13, but rated R if you are a Michigan fan. All of Denard Robinson's pass attempts against Alabama.