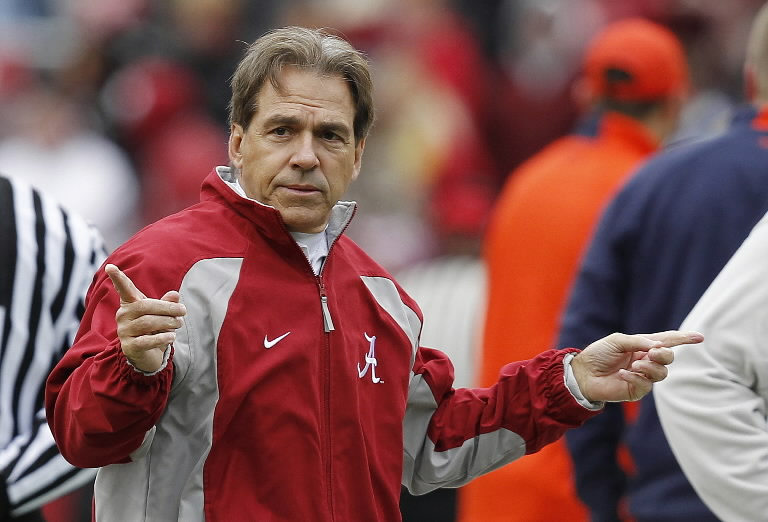 With the start of college football season now just weeks away, here at Crystal Ball Run we’ve decided to give you a new segment every Monday. It’s called the “The Monday Morning Look Ahead” and well, it is exactly what you’d expect it to be: A quick look ahead to the two or three biggest stories in the coming week. That’s right, while every other college football blog on the ‘net will spend their Monday mornings recapping what’s already happened, we’re already moving forward to the next week’s story lines.

Now, this is the first edition of the Look Ahead, and admittedly, this one will be a bit different than most weeks. There are no games to preview, matchups to discuss or lingering injuries to ponder, like there will be once the season starts. So instead today we’ll focus on the position battles, injuries and suspensions which make the headlines in early August in college football.

And with that, it only seems appropriate that we start our first Look Ahead down on the Bayou, and by asking…

What does LSU do without Tyrann Mathieu:

Unless you’ve been living under a rock for the past few days (or are just waaaaay too into women’s Olympic basketball), by now you’re probably aware that LSU All-American cornerback, Heisman Trophy finalist and the man with the best nickname in college football, Tyrann “The Honey Badger” Mathieu is no longer with the Tigers program. Mathieu was booted from the team late Friday for breaking team rules.

So with that, the attention immediately turned to what’s next for LSU, a club which all of a sudden has a gaping hole in their secondary…

… or do they? It’s a question that many college football pundits spent the weekend asking.

Why would we say that? Well, to put it as simply as we can, Mathieu isn’t a truly elite cover corner.

Now, is he a fantastic playmaker? Absolutely.

A ball hawk in every sense of the word? Of course.

A guy that offensive coordinators have to account for every snap of the game? Without a doubt.

But as far as a strict cover corner with the ability to shut down the other team’s best receiver? Well, not exactly. It’s a role that Patrick Peterson filled two years ago, Mo Claiborne last year, and truth be told, a responsibility that new starter Tharold Simon would’ve likely handled this year. Add in elite redshirt freshmen Jalen Collins and a handful of All-SEC caliber safeties (yeah, we’re looking at you Eric Reid!) and LSU should actually be ok strictly in terms of their pass defense.

Of course where Mathieu’s presence will really be missed is on special teams, especially on punt returns. There, the Honey Badger is simply second to none, as he finished fifth in college football in average return yardage (15.59 yards per return) and scored two touchdowns during the 2011 season.

More importantly though was the significance of those touchdowns, and just like when he made big plays on defense, Mathieu saved his biggest plays for LSU’s most important moments. The first punt return tied things up against Arkansas in the final game of the regular season after the Tigers fell behind 14-0, and the second came at a crucial point against Georgia in the SEC Championship Game, to give LSU momentum they’d never relinquish. Simply put, whoever replaces Mathieu returning punts (be it Odell Beckham or someone else) may have the talent, speed and elusiveness of the Honey Badger. But will they have the sense of the moment that Mathieu displayed last season?

It could be LSU’s most important question entering fall camp.

What will the Honey Badger do without LSU?

For all the talk about the impact of Mathieu’s departure on LSU’s National Championship hopes, very little has been made of what Mathieu’s departure means on Tyrann Mathieu himself. For a guy who already had off the field issues, leaving LSU could cost him millions of dollars in the next NFL Draft. Losing the exposure that the SEC provides every Saturday can’t help either.

It also raises the question of “Where will the Honey Badger land next?”

Read most reports, and they all seem to indicate that it is McNeese State- an FCS school located two hours from LSU’s campus- will likely receive his services. According to head coach Matt Vitor, Mathieu met with the coaching staff over the weekend, although he hasn’t officially enrolled.

As for the move itself, well, it seems like a natural fit for Mathieu.

Obviously the most important part about a transfer to McNeese, is that it’ll allow Mathieu to play right away. Had Mathieu transferred to another FBS school or decided to stay at LSU, he would’ve been ineligible to play in the 2012 season, but at FCS McNeese he can suit up this September, assuming he meets their eligibility requirements. McNeese is also relatively successful for their level, finishing with winning seasons in all six years Vitor has been head coach.

Regardless of where Mathieu ends up though, I do think I speak on behalf of all of Crystal Ball Run when I say that we wish him the best of luck. Yes, the kid was given plenty of chances, and yes, Les Miles did all he could to help him out, and in the end it was Mathieu who cost himself at LSU.

Still, for a kid with so much talent, and such a bright future, we hope this isn’t the last we’ve heard of the Honey Badger.

Is too much competition a good thing at USC?

Of all the storylines coming out of USC camp this summer, one of the most surprising is how effortlessly Penn State transfer Silas Redd has fit into the Trojans offense. While we all knew Redd would have an impact in Los Angeles, no one knew just how quickly it would happen. That’s because on his first carry, in his first scrimmage at ‘SC, Redd ripped off a 43-yard touchdown run. Not a bad way to welcome yourself to a new team, huh?

At the same time though, it did get us wondering about what this all means for incumbent 1,000-yard rusher Curtis McNeal, and whether too much competition might not necessarily be a good thing in Troy. Could Redd’s presence cost the senior McNeal his confidence and in turn, could that hurt the Trojans?

Now before we go any further, please understand, this is total speculation on our part. Since arriving on campus, McNeal has never been anything but an exemplary teammate and great face for the program. There is no reason for us to believe that he won’t handle Redd’s transition with the utmost class.

At the same time, let’s not forget just how much McNeal could potentially lose with the emergence of Redd. McNeal was a 1,000 yard rusher in his own right last year (including at least 85 yards in his last seven games) and it was as recently as three weeks ago that McNeal thought that he would be essentially the only option in the run game.

Only now Redd is on campus, impressing teammates and it does seem like McNeal has been a bit lost in the shuffle. Lane Kiffin has already called into question McNeal’s durability, and the senior back did little to help his cause by missing time over the weekend with a slight injury. While it does little to diminish the fact that he will receive carries to start the season, it does call into question whether it’ll be long before Redd steals the bulk of them.

Regardless, it’s an interesting conundrum at USC: Could the school with the least depth of all the major contenders have too much depth at the running back spot?

What about Alabama’s receivers?

And finally, after discussing the two other prohibitive favorites in college football (LSU and USC) it does only seem appropriate that we wrap up with the Alabama Crimson Tide. Nick Saban continues to keep things rolling in Tuscaloosa… except at wide receiver, where the Crimson Tide is all of a sudden razor thin.

Now regardless of what happened in camp, receiver was still an area of concern for Alabama entering the 2012 season. While A.J. McCarron returns, his top four receivers (Marquis Maze, Darius Hanks, Brad Smelley and Trent Richardson) have all moved on, leaving a big void in the passing game. Guys like Kenny Bell (17 catches) and tight end Michael Williams (16 catches) were expected to fill the void, as were a group of superstar freshmen, headlined by four-star pass catchers Amari Cooper, Chris Black and Eddie Williams.

Except, well, what do they say about freshmen? Unfortunately for Saban and new offensive coordinator Doug Nussmeier, whatever that statement is, it appears to be true in Tuscaloosa. Since last Monday, Alabama has lost Black to a shoulder injury that could cost him his entire freshman season, and because of transfer and injury in the secondary, Williams has been moved over to the defensive backfield. All of a sudden, that expected depth has dried up.

Now of course, to those looking at a “glass is half full” approach, they’d say that if Saban was comfortable enough to move Williams over to the defense, he must be confident in where his wide receivers stand. That makes sense. It absolutely does. But at the same time, you can’t go into fall camp expecting to get contributions from two key guys, lose both and still expect things to keep rolling forward. That’s just not how it works in college football, especially the SEC.

How will Alabama cope? We’ll find out.

It’s just one more thing we’ll be looking ahead to this week.