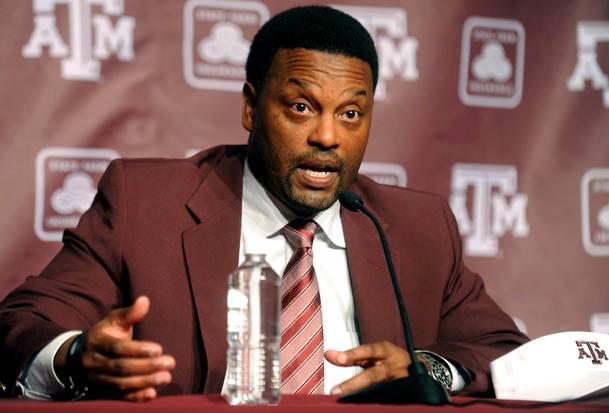 Whoever said there aren’t any interesting storylines in college football’s off-season has clearly never paid close attention to the SEC, where even the smallest of sentences, and can the biggest reactions.

And we certainly had a case of that this week, when new Texas A&M coach  Kevin Sumlin responded to some, ahem, not-so-friendly comments Florida coach Will Muschamp made a few weeks ago.

“He needs to worry about his own team.”

Whoa there coach, ease off!

In Sumlin’s defense, he kinda had to say something, especially after Muschamp basically threw Texas A&M- their opening SEC opponent in 2012- under the bus a few weeks ago.

“You ever been to College Station?  It’ll be the only time you go.”

My goodness Coach Boom, you kiss your mother with that mouth?

In all seriousness, this is only a story because it’s May, and because frankly, with a holiday weekend ahead of us, there isn’t much else to talk about. As we’ve mentioned before, kids are out of classes, assistants are recruiting, and head coaches are on the road meeting with boosters. Meaning, if you’re looking for interesting college football news this time of year, you’ve got to dig deep.

Of course what’s interesting is that really, if there was ever a game featuring two relatively average teams that actually needed no hype at all, this would be it.

Part of it is that Texas A&M is new to the SEC sure, but a bigger part is that their matchup with Florida will be their first conference game period, and the dawning of a new era of Aggies football. It’ll also provide us a million other subplots; the first real insight into Brett Pease’s offense at Florida; whether Sumlin’s spread can work against SEC defenses; and overall, if Texas A&M can hang in college football’s toughest conference. Sumlin seems like the right guy for the A&M job, and recruiting has been off the charts since he’s gotten there, things that seem great for the long-term. But in the short-term, the bigger question becomes: Did Mike Sherman leave enough in the cupboard for Sumlin to compete in college football’s toughest conference?

Then of course there’s the crowd at Kyle Field, which could have a big impact on that first SEC game for the Aggies. As a matter of fact, the ironic thing about Muschamp’s comments was that before he made the original “You ever been to College Station?” remark, he actually preceded it up by being complimentary of the stadium, fans and atmosphere.

“It will be a very SEC-like atmosphere,” Muschamp said. “It’s one of the few places in the Big 12 that I would say that about.”

Everyone who has ever been to Kyle Field will tell you the same, and the Aggies “12th man” could be the difference in starting conference play with a win and loss.

Regardless, of who wins on September 8 though, one thing seems certain: The game on the field will definitely be more entertaining than the war of words off of it.

How many days until the start of the season again?

For all his insight, analysis and articles on college football and beyond, be sure to follow Aaron on Twitter @Aaron_Torres.