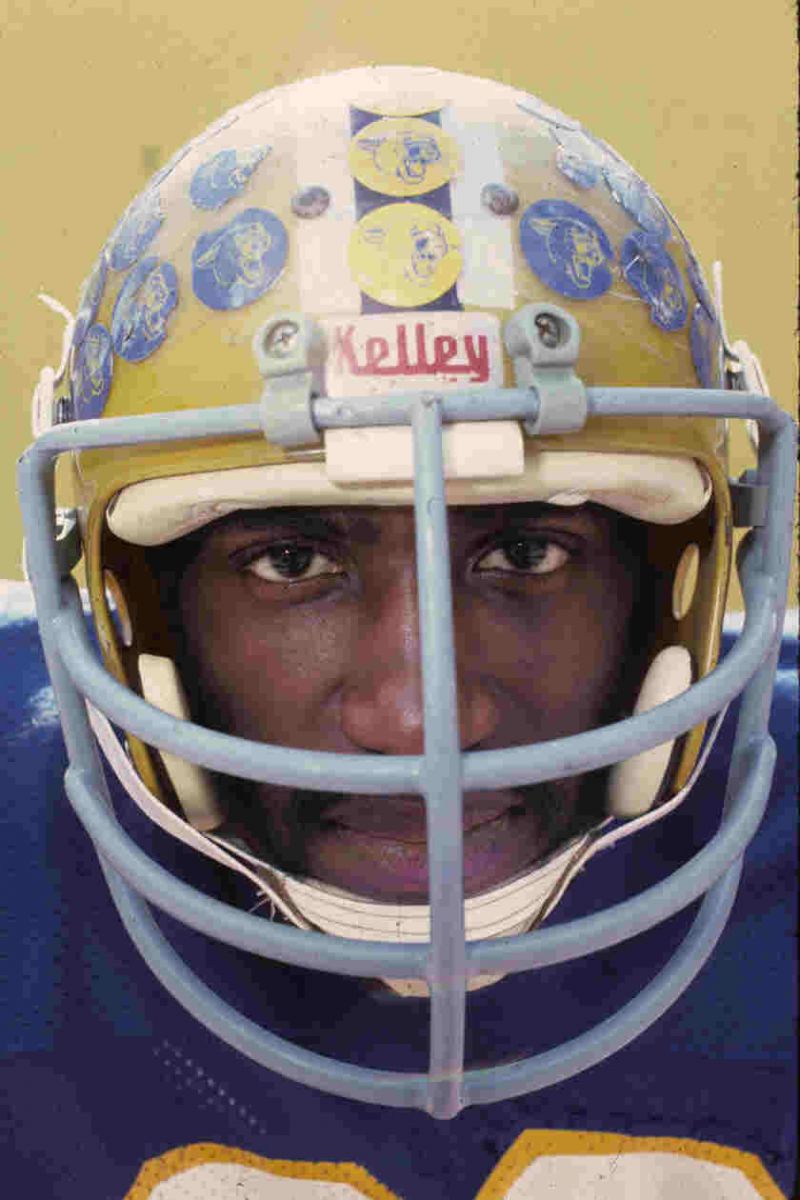 With the recent announcement that NCAA Football 14 will feature full-on, beast-mode Bo Jackson, it got us thinking here at Crystal Ball Run: What other players would we like to see at their college peak?

Let’s face it you aren’t looking for great linemen like Dave Rimington or a punter like Ray Guy.

A few of the greats just missing the cut were Tony Dorsett, Joe Namath and Warren Sapp.

Some of you will love this pick and others will just laugh, but you had to see how dominant Hugh Green was in his prime to understand why this is the top choice.

He should have won the 1980 Heisman because he was the best player that season (no offense George Rogers).

His blazing speed and fierce play made him the must-see defensive player of the 1970s.

Herschel Walker was the best running back to ever play the game (sorry Barry Sanders fans), and he helped lead Georgia to a national championship in his freshman season.

Walker followed up his amazing freshman season with 1,891 rushing yards and 18 touchdowns; however, he finished second in the Heisman voting to USC's Marcus Allen.

Walker was a physical specimen and his overall numbers as an Epic player would have to be better than anything Bo Jackson gets.

Barry Sanders arguably had one of the greatest single seasons in college football history when he claimed the Heisman Trophy in 1988. He averaged 7.6 yards a carry and finished with 2,628 yards.

The college game has not seen Sanders’ quickness and elusiveness since he left for the NFL.

Fans have missed the talents of Sanders since his early retirement from the NFL. How much fun would it be to see defenses try to stop him in a future video game?

We’re going back a ways for this one, but Jim Thorpe is one of the greatest athletes of all time. He was also a star in baseball and in the Olympics.

In 1912, Carlisle won the national championship mainly because no one could stop Thorpe.

We’re not interested in playing incarcerated and out-of-shape O.J. Simpson, but the guy who rushed for 3,423 yards in two seasons at USC would be a welcome sight.

If O.J. can produce these types of runs then he is worth epic status. 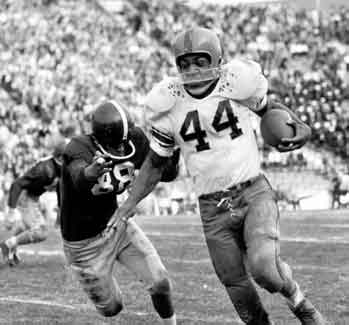 Jim Brown was robbed of the 1956 Heisman (probably because of racism), but it doesn’t undermine his stellar career.

When Brown ran the ball it was like a man among boys. If Bo Jackson gets 99 ratings, then Brown has to be close.

How many Naval Academy players would you really want to see brought back as an Epic player? Maybe Napoleon McCallum would be an interesting one to consider, but no one tops Roger Staubach.

Staubach won the Heisman Trophy after his junior season in 1964, when the Midshipmen finished 9-1 and No. 2 in the nation. He also led Navy to two victories over Army.

To see his rocket arm and athleticism back on display would be a special treat.

The unanimous All-American in 1980, was one of the hardest-hitting safeties in the nation during his time at USC.

It may be a stretch to think a safety in a videogame can make a huge impact, but if there is one guy who could do it that would have to be Ronnie Lott.

He definitely has championship pedigree on his side. He was part of the 1978 USC national championship squad and also played in the 1979 and 1980 Rose Bowls. 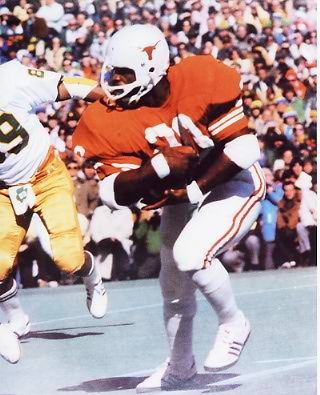 Earl Campbell is one of college football's best power backs. While he had breakaway speed, Campbell is better known for delivering devastating blows on defenders who tried to tackle him.

He was an All-American in 1975 and 1977, as well as the Heisman Trophy winner his senior season for the Longhorns.

If EA Sports would add Campbell, they would have to make sure to include the old tear-away jerseys for even more authenticity.

Why does it seem that Tommie Frazier is always overlooked as one of college football’s all-time greats?

So what his game didn’t translate to the NFL, Frazier was a key factor in Nebraska winning back-to-back national titles in 1994 and 1995.

As the Cornhuskers quarterback, Frazier had an impressive 33-3 record, and he had one of the greatest runs in the history of the game.

It’s still hard to believe Lee Roy Selmon is no longer with us, but his impact on the defensive side of the ball would be worth having him appear in a video game.

When he arrived in Norman, Okla., he joined his brothers Lucious and Dewey on the Sooners defensive line.

Tight ends don’t get a lot of love in the videogame era, but John Mackey was a beast at Syracuse and is considered by many the greatest to ever play.

His overall numbers are not awe inspiring, but Mackey would excel in today’s more open offensive attacks.

In three seasons with the Orange, Mackey caught 27 passes for 481 yards and six touchdowns. As a junior, he was a key contributor in Syracuse's 1961 Liberty Bowl triumph, catching four passes in a 15-14 victory against Miami. 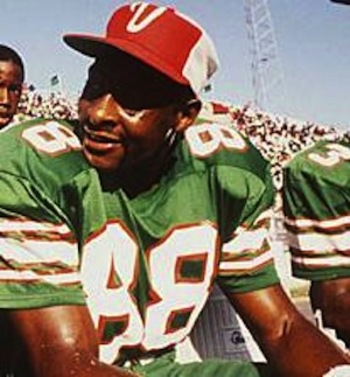 Jerry Rice’s nickname in college was “World,” because teammates and coaches said there wasn’t a ball in the world he couldn’t catch.

Of course Rice went on to have a Hall of Fame career with the San Francisco 49ers, but he set all kinds of NCAA Division I-AA records as Mississippi Valley State played a run-and-shoot offense.

He actually finished ninth in the Heisman voting in 1984, and went on to earn MVP honors at the Blue Gray Classic.

While everybody likes those big bodies at receiver like Randy Moss, I’d like to see the quick and elusive Anthony Carter make a comeback in videogame form.

Carter was such a rare find at Michigan since Bo Schembechler loved to ground it out with running game. However, Carter gave him a big-play threat that even the stubborn coach couldn’t overlook.

The 160-pounder finished his career with 37 touchdown receptions, including 14 in his final season.

If Bubba Smith was an up-and-coming high school prospect today, he would be near or on top of every recruiting list.

Raised in Texas, Bubba Smith wanted nothing more than to be a Texas Longhorn. However, the Southwest Conference was not integrated and Smith headed north to play for Duffy Daugherty at Michigan State.

He was part of the 1965 national championship squad and played in the “Game of the Century” against Notre Dame in 1966.

Smith was so respected that he made just 30 tackles his senior season because offenses did everything to avoid him.

Here is another example of people forgetting how talented and impactful Ernie Davis was to the game and Syracuse because he didn’t have a huge pro career. Of course, that was because he was stricken with leukemia and never played a down in the pros.

In his first season on the field at Syracuse, Davis guided the Orange to the 1959 national championship with a 23-14 victory over Texas in the Cotton Bowl.

He went on to become the first African-American to win the Heisman Trophy in 1961.

Bronko Nagurski is a name that just screams college football. He still remains one of the most prominent figures in Minnesota football history.

He played tackle and end in his first season, but moved to fullback in 1928. At 6-foot-2, 230 pounds, Nagurski was a beast for the era. Nagurski simply overwhelmed opponents with his physical style of play.

How often does this happen? He was named All-American at two positions — tackle and fullback.

Dick Butkus played linebacker, center and fullback during his career at Illinois, which resulted in the retiring of his No. 50.

He had a reputation for delivering his best performances in the biggest games. An example came in his junior season when he recorded 23 tackles against Ohio State as the Illini went on to win the Big Ten title.

Butkus’ ability to run down quick backs and make big hits would make him a huge bonus in the video game.

Have you ever wondered how the former 6-foot-3, 270-pound defensive tackle got his nickname Mean Joe Greene? It’s a play off North Texas’ nickname Mean Green.

Greene may come from a small school, but who wouldn’t love to see this guy running down backs and getting after the quarterback in today’s college game.

If you don’t think a defensive player can have an impact on the game, North Texas went 23-5-1 during his career.

Derrick Thomas quickly made an impact in the SEC and became one of the most dominant defenders of his era. He was a sack machine and made life miserable for any lineman trying to block him.

Thomas died way too young when succumbed to a pulmonary embolism just 16 days after a serious car accident left him paralyzed.