Earlier, we looked at five players that have been surprises in the early stages of the 2014 season. The other side of the coin, of course, is those who haven’t come close to meeting expectations. In at least a couple of cases, such struggles could be costly in terms of free agent value after the season. But just as early success doesn’t automatically mean a good season, initial failures don’t indicate a poor year is inevitable either. Bad starts can be forgotten, and there’s plenty of time to rebound. However, here are five early-season disappointments that might point toward seasons that these players will want to forget.

Chase Headley, Padres: With free agency awaiting after the season, Headley really needed a good year. That was especially true because of his poor 2013 season. But so far, he’s not padding his résumé for potential future employers. Headley, 29, is off to a terrible start, batting .186 with a .564 OPS, two home runs and seven RBI. Even worse, he’s continuing to raise questions about his durability after going on the disabled list with a calf injury. There’s plenty of time to rebound and put up good numbers. And Headley might benefit from a slim third base market. But following an MVP-caliber 2012 season, he’s not doing much to demand star money.

Curtis Granderson, Mets: Coming off an injury-plagued 2013 season and leaving the hitter-friendly dimensions of Yankee Stadium raised much concern about Granderson’s future as an impact hitter. The Mets signed him to provide some power to a corner outfield position, but the 33-year-old isn’t making enough contact to hit any balls out of the park. He’s currently hitting .141 with a .470 OPS and only one home run. Last week, he broke an 0-for-22 hitless streak that had dropped his batting average to .116. Granderson has started to tally some hits since then, but the power (with a .217 slugging percentage) that the Mets need is still missing. 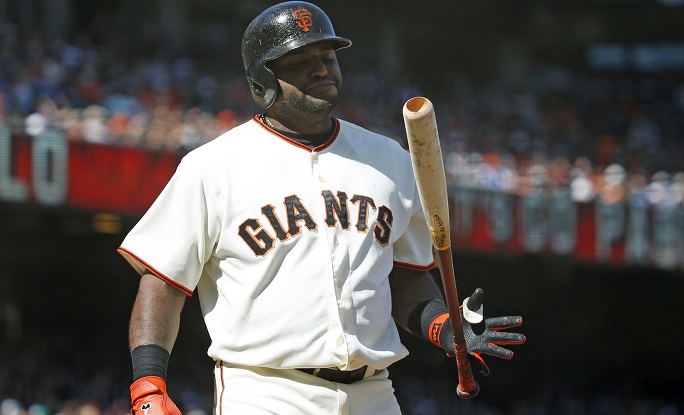 Pablo Sandoval, Giants: Here’s another third baseman doing little to improve his free agent market value. Batting .177 with a .564 OPS could not have been what Sandoval, his agent or the Giants had in mind for this season. Sandoval’s career numbers (.293 average, .817 OPS) would seem to indicate that this is a fluke, and he’s going through a very rough stretch. (A .208 BABIP probably says he’s due for a turnaround as well.) However, he’s not a hitter that’s typically started slow and then improved as the season progressed. Sandoval has been rather consistent throughout his career, so he’s never quite dealt with anything like this. That has to be a concern.

Mike Moustakas, Royals: Are we picking on third basemen here? At least Moustakas isn’t set for free agency after the season. Actually, he still has three seasons of arbitration eligibility left beginning next year. Moustakas has been tabbed as a significant piece of the Royals’ future since a promising 2012 season. The 25-year-old might be picking it up a bit, finally hitting for some power and driving in some runs. But with a .149 average and .552 OPS, he’s going to stay near the bottom of the lineup instead of being the middle-of-the-order run producer for the Royals. But with a .132 BABIP, maybe some hits will begin to fall for Moustakas as the season progresses.

R.A. Dickey, Blue Jays: The Mets traded for a Cy Young Award winner, but Dickey hasn’t pitched like a staff ace since coming to Toronto. There were questions about how he might fare against AL East competition and whether or not his knuckleball would move as well in the Rogers Centre environment. But Dickey has also been victimized a bit by his defense, as his 4.31 FIP compared to 5.09 ERA indicates. A .301 BABIP also doesn’t speak favorably of the Blue Jays’ play in the field. However, that FIP also says that the knuckleballer just hasn’t been pitching that well. Dickey isn’t striking out as many batters either, which was a key to his 2012 success.