We talk about “lost seasons” all the time in sports, but 2014 truly was a lost, franchise-altering season for the Tampa Bay Rays. Tampa Bay got off to a horrid start in 2014, and were 31-48 on June 24th. Then, they caught fire, going on a 22-6 run to close within one game of .500…and then they traded David Price to the Tigers, struggled down the stretch, and had an offseason that may best be described as “transformative”. It’s a whole new era for Rays baseball. 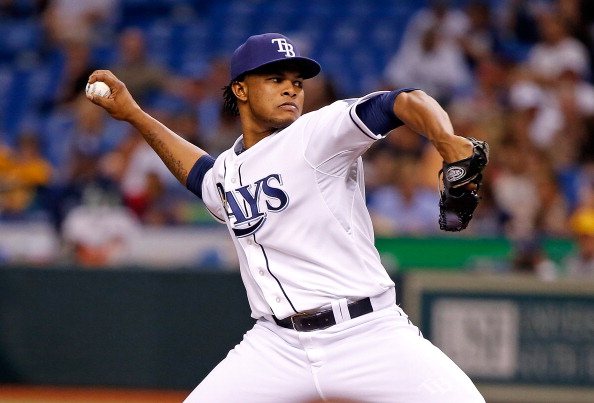 ST PETERSBURG, FL – JUNE 28: Alex Colome #37 of the Tampa Bay Rays pitches against the Detroit Tigers during the game at Tropicana Field on June 28, 2013 in St. Petersburg, Florida. (Photo by J. Meric/Getty Images)

Impact Rookies: The Rays are big on Steven Souza, acquired from the Nationals in the Wil Myers blockbuster trade. Souza will be 26 in April, and struggled in 26 major league plate appearances in 2014, but obliterated the International League to a .350/.432/.590 line with 28 homers and 26 steals in just 96 games. He’ll be given every opportunity to stick in the majors, though the Rays do (currently) have some veteran outfield options in David DeJesus, utility man Logan Forsythe, and Brandon Guyer.

Tampa Bay also has a spot open in their rotation that will probably end up going to a prospect while Matt Moore recovers from Tommy John surgery. Alex Colome has a 2.50 ERA in 39 2/3 innings in the majors, but has struck out just 25 while walking 19. He’s held his own in AAA over the past two seasons, and is the favorite to win the spot.

Another ex-Nationals farmhand, Nate Karns, could also make a play for that last rotation spot. Karns is 27 and has an ugly 6.00 ERA over five major league starts, but he’s done nothing but strike out hitters at every minor league stop he’s made. However, he’s had some walk issues as a minor leaguer, and has struggled with homers in the last two seasons.

There are a few other prospects that could make an impact in one way or another for the Rays this season, including former top overall pick Tim Beckham, oft-injured shortsop Hak-Ju Lee, former Royal farmhand Mike Montgomery, and former first round pick Mikie Mahtook. 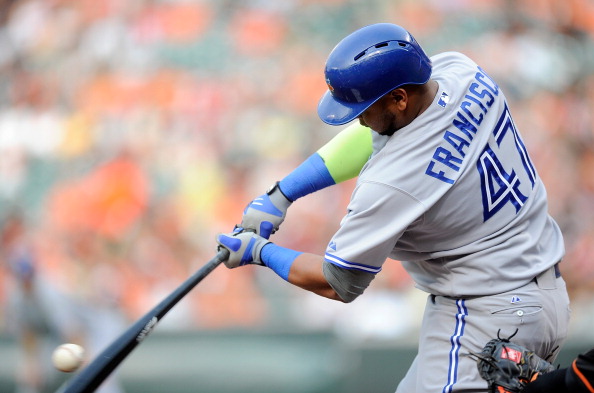 BALTIMORE, MD – JUNE 13: Juan Francisco #47 of the Toronto Blue Jays hits a home run in the second inning against the Baltimore Orioles at Oriole Park at Camden Yards on June 13, 2014 in Baltimore, Maryland. (Photo by Greg Fiume/Getty Images)

Position Battles: Aside from the fifth starter battle I just talked about, the Rays really only have open spots on their bench and in their bullpen. Juan Francisco has more power than anyone on the Rays, *and* is a lefty, but he has no versatility whatsoever, and the club would likely prefer Forsythe or DeJesus over him. Beckham or Lee could also make a play for a bench spot, but they would first need to prove that they’re healthy. 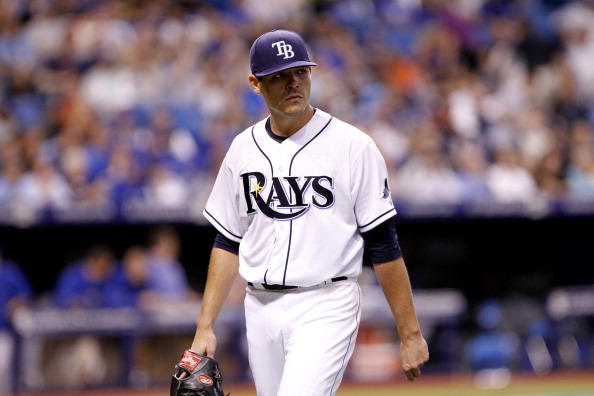 ST. PETERSBURG, FL – APRIL 2: Matt Moore #55 of the Tampa Bay Rays walks to the dugout after being taken off the mound by manager Joe Maddon of the Tampa Bay Rays during the sixth inning of a game against the Toronto Blue Jays on April 2, 2014 at Tropicana Field in St. Petersburg, Florida. (Photo by Brian Blanco/Getty Images)

Injury Concerns: Jake McGee and Matt Moore will likely start the year on the DL while recovering from elbow surgeries. That’s not a good start. Evan Longoria was actually healthy over the last two years, but the 29-year old missed time in both 2011 and 2012.

Desmond Jennings has missed time in all three of his full major league seasons with a variety of injuries. Alex Cobb also spent time on the DL in each of the last two seasons, but a strained oblique and a concussion when a line drive hit him in the forehead aren’t exactly signs that he’s injury-prone.

And really, aside from all that, the Rays are a largely healthy team. All things considered, Tampa Bay could be in a much worse position. 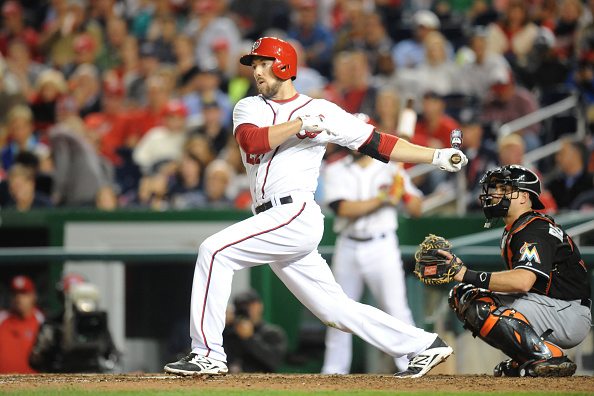 WASHINGTON, DC – SEPTEMBER 26: Steven Souza Jr. #21 of the Washington Nationals takes a swing during game two of a doubleheader baseball game against the Miami Marlins on September 26, 2014 at Nationals Park in Washington, DC. The Marlins won 15-7. (Photo by Mitchell Layton/Getty Images)

Most Important Player: Steven Souza.
Putting Souza in this spot may be aggressive, but bear with me for a second. Souza was the primary return for the Rays in what was arguably the biggest trade of the winter. They shipped off the 2013 AL Rookie of the Year in Wil Myers and a pair of solid prospects (via the Padres) in Joe Ross and the still-to-be-named-later Trea Turner for Souza. They’re banking on him outproducing Myers over the next five years, and given Myers’ tremendous upside, it’s a very risky gamble.

But maybe, Myers’ 2013 was the highlight of his career, and his struggles in 2014 weren’t just a result of his broken wrist, but a real sign of his future abilities. And maybe Souza’s left/right splits begin to normalize, and his strikeout rate falls, and he turns into an above average regular. If all of that happens, Rays fans will end up feeling a lot better about the trade.

But what if Myers turns back into the player he was in 2013, a perennial 20-30 homer guy? And what if Souza never puts it together and ends up looking like a fourth outfielder for the Rays? Given the state of the Rays franchise right now, his performance in 2015 (and I don’t mean to sound too hyperbolic here) could have consequences much bigger than anyone realizes. 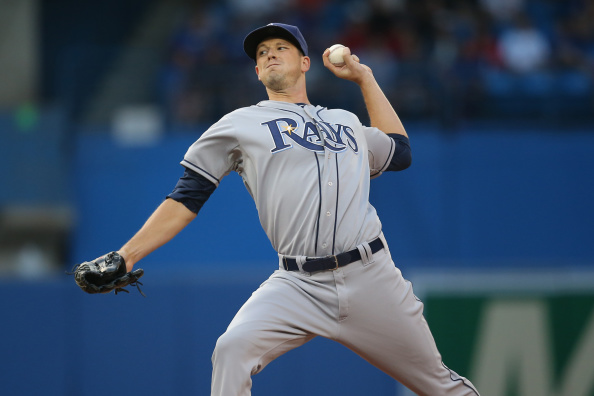 TORONTO, CANADA – AUGUST 22: Drew Smyly #33 of the Tampa Bay Rays delivers a pitch in the first inning during MLB game action against the Toronto Blue Jays on August 22, 2014 at Rogers Centre in Toronto, Ontario, Canada. (Photo by Tom Szczerbowski/Getty Images)

X-Factor: Drew Smyly.
Smyly’s success with the Rays over seven starts after being traded as part of the return for David Price possibly raised expectations a little too high for him. He had a 1.70 ERA! He struck out 44 batters and walked 11 over 47 2/3 innings! But Smyly still had a pitiful ground ball rate with Tampa Bay (33.3%, 6% lower than his rate with the Tigers over two and a half seasons), and had similar strikeout and walk rates with the Tigers over a larger sample (though he spent all of 2013 as a reliever).

What *is* he? Is he the future ace he looked like down the stretch? Is he a potential dominant reliever? Is he a middle of the road starter?

I don’t think we know quite yet, and I don’t think we really *will* know until this time next year. The high expectations for Smyly set by fans aren’t really fair – after all, the bulk of those expectations are built on a seven game sample in which he had allowed a BABIP of just .184 and stranded nearly 90% of runners. 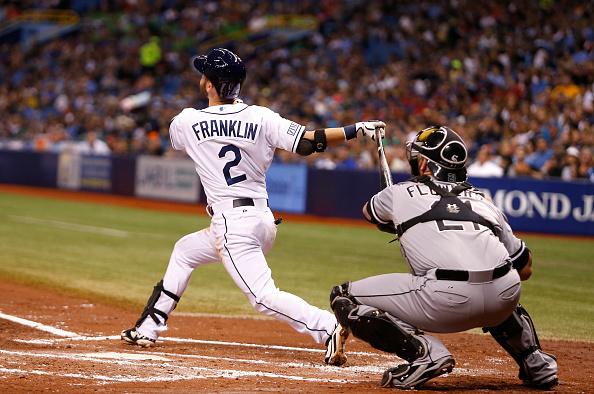 ST. PETERSBURG, FL – SEPTEMBER 20: Nick Franklin #2 of the Tampa Bay Rays follows through as he hits a two-run home run in front of catcher Tyler Flowers #21 of the Chicago White Sox during the second inning of a game on September 20, 2014 at Tropicana Field in St. Petersburg, Florida. (Photo by Brian Blanco/Getty Images)

Key Question: Who is the real Nick Franklin?
We might as well move on to the *other* key part of the David Price trade, Nick Franklin. Franklin turns just 24 in March, so it’s not as if his time is running out. But he hasn’t shown much over his 130 games in the majors over two seasons. In those 130 games with the Mariners and Rays, Franklin has hit just .213/.289/.358, striking out 145 times in 502 plate appearances. He has shown pop, homering 13 times, and speed, stealing eight bases while only being caught once.

The Rays are dumping him into the fire this season, and hey, that’s fine – you’ve got to see what he can do in the majors and determine whether or not he’s a long-term part of your future. And after trading both Ben Zobrist and Yunel Escobar this winter, the Rays will be going with an all-new combination up the middle in Franklin and Asdrubal Cabrera. Is Franklin the future star he looked like in 2013, or is he the guy who struggled while playing for four different teams in 2014? 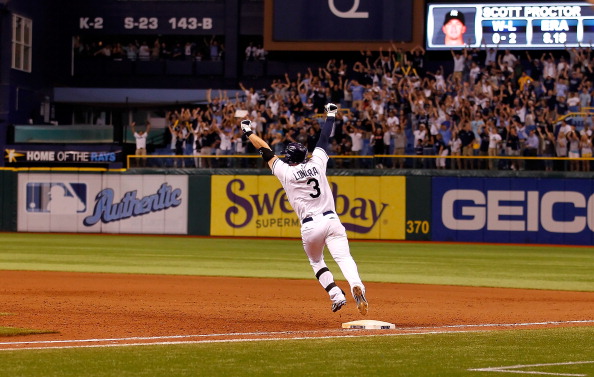 ST PETERSBURG, FL – SEPTEMBER 28: Infielder Evan Longoria #3 of the Tampa Bay Rays rounds the bases after his bottom of the twelveth inning walk off home run against the New York Yankees during the game at Tropicana Field on September 28, 2011 in St. Petersburg, Florida. (Photo by J. Meric/Getty Images)

Best Case Scenario: Given the state of the AL East right now, it’s not a stretch to see the Rays doing enough to win the division. Souza could effectively replace Myers in the lineup, Longoria could stay healthy and be an MVP candidate, Cabrera and Franklin could replace Escobar and Zobrist without missing a beat, and the incredibly young rotation could prove itself to be the best in the AL East. None of those things are really stretches to admit, but all of them happening in the same season could be a little far-fetched.

Worst Case Scenario: And here’s another scenario that isn’t too hard to envision – the bottom completely falls out for the Rays. Longoria gets hurt and is a non-factor. The rotation struggles and eventually runs out of gas. Franklin and Souza are busts. The Rays lose 90+, and are back where they were nearly a decade ago.

Realistic Prediction: Just like I said yesterday in the Red Sox preview, I wouldn’t be shocked out of anything from the Rays. Could they win 90? Yep. Could they lose 90? Yep. I think this is roughly a .500 team on paper, and while you could pencil them in for a few more wins in the past because of the presence of Joe Maddon, you can’t really do that anymore with Kevin Cash now at the helm of the team. A lot of the Rays’ success or failure is dependent on the rest of the AL East, but this *is* a team that can challenge for a division title if some of the balls bounce their way.