Our next stop on our journey through the AL East takes us north of the border, where the 22-year playoff drought of Canada’s lone Major League team has supposedly been close to being erased in recent years, only to see the team fall short due to injuries, bad luck and seemingly everything in between. Now, with the signing of a hometown hero and what looks to be a wily trade by one of the best trading GMs in the business, the Toronto Blue Jays are poised to finally take the leap towards the postseason appearance that has eluded them so. 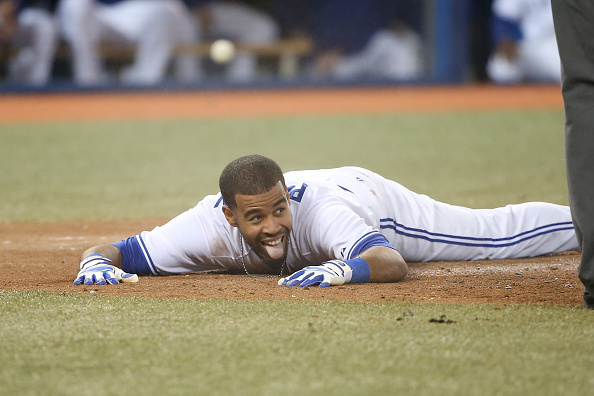 TORONTO, CANADA – SEPTEMBER 26: Dalton Pompey #45 of the Toronto Blue Jays reacts after sliding into home plate to score a run in the third inning during MLB game action beating the tag by Nick Hundley #40 of the Baltimore Orioles on September 26, 2014 at Rogers Centre in Toronto, Ontario, Canada. (Photo by Tom Szczerbowski/Getty Images)

Impact Rookies: The rookie who has to make the biggest impact will be Pompey, who shot up through the minor leagues in 2014 beginning in High-A Dunedin and ending up with a few at-bats at season’s end. The Blue Jays hope he can take over for the departed Colby Rasmus. A 16th-round pick as a Canadian high-schooler in 2010, Pompey has plus speed and the range to cover center field well while having a little pop to boot. He’s not going to be an All-Star, but his approach at the plate (Just under a 10% walk rate across all levels last year) could make him the player Toronto thought Gose would be.

The other question will be answered in the rotation, where top prospect Daniel Norris is expected to battle the newly-acquired Marco Estrada for the fifth spot. The lefty has been near the top of every prospect list imaginable this offseason, featuring a fastball that can touch 95, a slider that is considered a plus pitch and a changeup that’s a good work in progress. If Estrada is impressive out of the gate, Norris could see time at Triple-A to save on his service clock, but there’s a good chance that Estrada will falter and Norris will take his spot. If he does, he becomes the third young pitcher in a very promising rotation that features a pitcher with serious strikeout potential in Drew Hutchison and aspiring ace Marcus Stroman.

Devon Travis might get an opportunity at second base, which has long been an issue for Toronto, and catcher A.J. Jimenez could be there as a backup to Martin at some point, but much of Toronto’s minor league upside is in the lower levels and won’t be helping much in 2015. 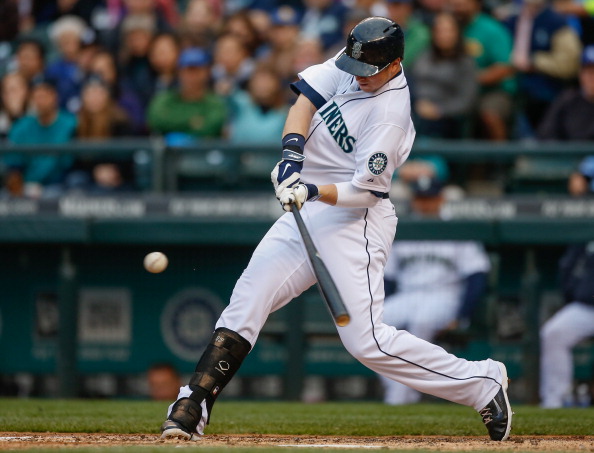 SEATTLE, WA – MAY 10: Justin Smoak #17 of the Seattle Mariners hits a two-run home run in the fourth inning against the Kansas City Royals at Safeco Field on May 10, 2014 in Seattle, Washington. (Photo by Otto Greule Jr/Getty Images)

Position Battles: The only one of note right now is for that final rotation spot between Norris and Estrada, as the offense is set across the board for the Blue Jays. If Travis gives Izturis a run, it probably won’t be until June or so. One thing to watch out for is what will happen at the 1B/DH spot. Smoak and Encarnacion (and his parrot) are penciled in at the respective spots, but if Smoak falters, there’s a chance that Encarnacion could play 1B and Dioner Navarro could DH. Navarro is a prime trade candidate, however, and will be shopped rather quickly if Smoak can make an immediate impact.

The bullpen, which GM Alex Anthopolous tried to focus on this offseason, looks to be set with some intriguing arms, including Aaron Sanchez and Kyle Drabek, both former starters who have the stuff to dominate in short stints. There’s talk of Sanchez perhaps overtaking Brett Cecil for the closer’s spot, but Cecil has been absolutely dominant over the past couple seasons and looks like he could have a stranglehold on the ninth inning for the foreseeable future. 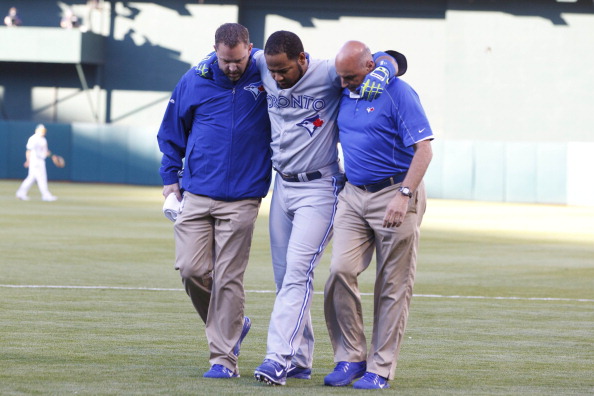 OAKLAND, CA – JULY 05: Edwin Encarnacion #10 of the Toronto Blue Jays is assisted off the field by trainers after sustaining an injury during the first inning against the Oakland Athletics at O.co Coliseum on July 5, 2014 in Oakland, California. (Photo by Jason O. Watson/Getty Images)

Injury Concerns: This is where the Blue Jays have seen the most trouble since the promise of the Marlins mega-deal before the 2013 season blew up in their face. The team’s two biggest offensive weapons in Jose Bautista and Edwin Encarnacion have battled a lot of injuries over the past couple years, as has Jose Reyes. While he’s been very dependable the last three seasons, there’s some question about Russell Martin’s durability as he exits his prime years.

Strangely enough, there doesn’t seem to be any concerns in the rotation. R.A. Dickey and Mark Buehrle are horses while both Hutchison and Stroman showed that even with their innings limit being pushed that they could get the job done, which is especially great for a Tommy John survivor like Hutchison. They’ll both be depended on to take a full workload this season. 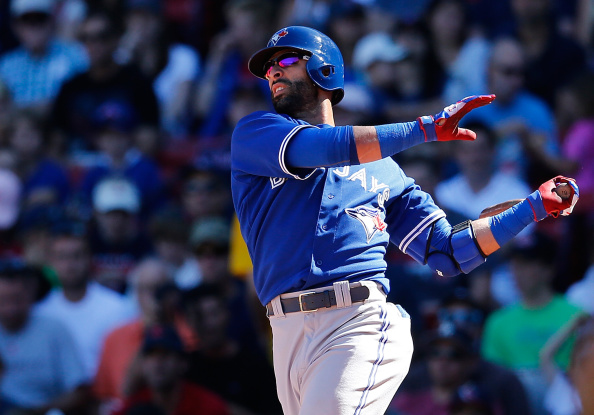 Most Important Player: Jose Bautista.
It’s pretty easy: If Bautista can play over 145 games this season, the Blue Jays are gonna be right there in the wild card hunt. He’s the offensive catalyst for this team and will be depended on to be a linchpin in an offense that has a lot of potential from top to bottom. At his best, he’s one of the five best offensive players in baseball and perhaps the single most dangerous power hitter in the game.

The 3-4-5 of Bautista, Encarnacion and Josh Donaldson might be the best in all of baseball, and getting Bautista to that 600 plate appearance mark like he did in 2014 is going to be key for the Blue Jays to contend this year. 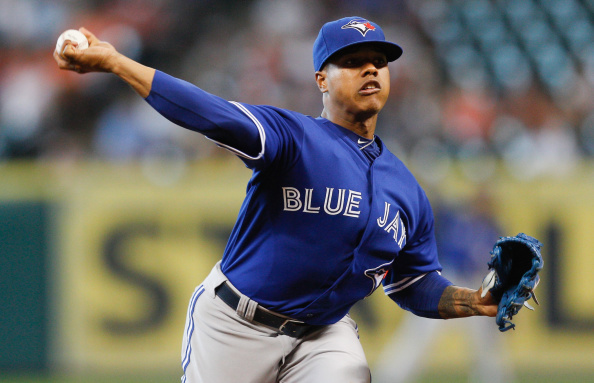 X-Factor: Marcus Stroman.
Over at Fangraphs last week, his pitch arsenal was dissected by comparables to conclude that it’s absolutely ridiculous for Stroman to have the six-pitch mix that he has. When you see a comparables list that includes Roy Halladay’s sinker, Jose Fernandez’s curveball and Johnny Cueto’s fastball, you all of a sudden have the pedigree that few in the game can match up with.

In 130 2/3 innings in 2014, Stroman was worth 3.3 fWAR and posted a 3.65 ERA. FIP loved him, as his 2.84 mark and 3.17 xFIP shows that he pitched even better than that ERA would lead you to believe. He had a 4/1 K/BB ratio, even with his strikeouts not yet to that 1+ per inning mark he held in the minors. Every peripheral he has shows that he is not just a good pitcher now, but a great pitcher in the making. He threw 166 1/3 innings last season in all, and the 200 inning mark looks to be his goal for 2015. For the first time in a long time, the Blue Jays have a young starter that has buzz and the stuff to back it up.

The big question, though, and it’s why he’s the X-Factor, is whether he can take the step forward to lead this staff. Dickey and Buehrle will definitely chew up their share of innings, but it’s up to Stroman to lead Hutchison and eventually Norris to a level that puts the Blue Jays at the top of the AL East heap. If he becomes the ace the Blue Jays hope he can be and helps bring along his fellow youngsters on the staff, then the Blue Jays all of a sudden will feature a formidable starting rotation. 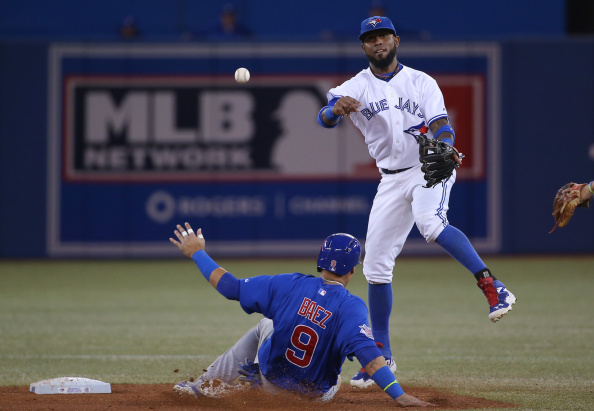 TORONTO, CANADA – SEPTEMBER 9: Jose Reyes #7 of the Toronto Blue Jays turns a double play in the third inning during MLB game action as Javier Baez #9 of the Chicago Cubs slides into second base on September 9, 2014 at Rogers Centre in Toronto, Ontario, Canada. (Photo by Tom Szczerbowski/Getty Images)

Key Question: Can the team’s best players stay on the field?
On paper, a team that has a 1-5 of Reyes, Martin, Bautista, Encarnacion and Donaldson should be one that contends in any division in baseball. The problem is that there’s a lot of injury history tied to those players. If they miss significant amounts of time from any of those five (I’m thinking anywhere in the realm of them not getting 550 plate appearances this season), they are not going to contend for the AL Wild Card. The AL West is already stacked as it is, the Indians, Royals and maybe even the White Sox will be there in the Central and the Orioles think they’re gonna be able to contend again in 2015, as well.

As I said above, Bautista becomes the team’s biggest asset when healthy, and Reyes did play basically a full season in 2014. Encarnacion missed 34 games but was tremendous when not injured. If the injury bug comes and bites the Blue Jays again, they don’t have the depth to hold off the other good teams in what looks to be a wide-open AL Wild Card race. 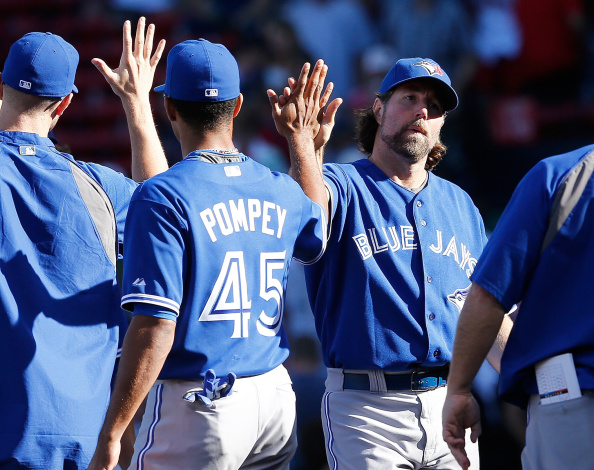 Best Case Scenario: The top five hitters in the order combine for 2750+ plate appearances and 100+ HRs, with Bautista once again becoming a Top 5 MVP Candidate. Justin Smoak does his best 2014 Adam Lind impression at the Rogers Centre bandbox. Pompey hits 10 HRs and steals 30 bases. Stroman becomes the King of the North. Buehrle and Dickey throw 200+ innings of sub-4.00 ERA ball. Hutchison approaches 200 K’s for the season. Norris throws 150 innings and has a K/BB ratio of 4/1. Sanchez, Drabek, and Chad Jenkins shine in the bullpen. Cecil continues to be one of the best left-handed relievers in baseball and gives Glen Perkins a run for his money as the best southpaw closer. They clinch an AL Wild Card spot with between 86-89 wins.

Worst Case Scenario: Injuries continue to haunt the team, Father Time catches up to both Dickey and Buehrle which makes the Blue Jays scramble for anyone to fill up innings. The young pitchers don’t take a step forward. Yet another season under .500 for the team.

Most Realistic Scenario: With the turmoil in the front office this season that included what seemed to be a game of chicken with Dan Duquette to become the team’s new president, Anthopolous has pushed all his chips to the middle of the table in 2015 with the hope of pushing the Blue Jays into the playoffs. If you think where the team could be on the high end of the bell curve, 90 wins isn’t out of the question, but realistically, assuming everyone stays relatively healthy, this team should compete for the AL Wild Card. Most projections have the Blue Jays in the 84-86 win range, which seems about right.

That being said, there’s a high amount of variance here considering the talent of the top of that order, Justin Smoak’s ability to have a season out of nowhere, and the steps taken forward by the team’s young pitchers. Conservative estimates have them in the chase for the wild card, but don’t be surprised if things come together for this team and 2015 finally breaks a curse so old it can enjoy a fine bottle of Molson Canadian (or Labatt Blue, take your pick).