Last week, the Seattle Seahawks became the first defending Super Bowl champion since 2005 to win a playoff game. Now, with a victory over the Green Bay Packers on Sunday, they’ll be one win away from becoming the first team to repeat in exactly a decade. 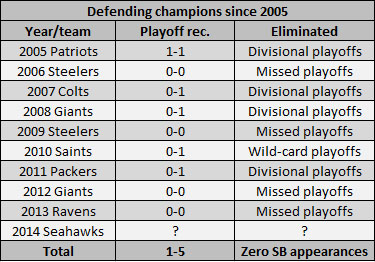 But now Seattle has a chance to prevent this from becoming the longest stretch in NFL history without a repeat champion. And we’re pre-dating the Super Bowl for that, with the reference going all the way back to when the Canton Bulldogs won back-to-back championships in 1922 and 1923.

There are obvious reasons for this. More teams, more parity, the salary cap era, free agency.

Could the Seahawks break the curse? Merely getting a win is a curse-breaker in itself. And now they’re undoubtedly the Super Bowl favorite again, what with Aaron Rodgers limping already and the Broncos eliminated and the Patriots dealing with a championship slump of their own.

And really, when you consider that Russell Wilson is the highest-rated playoff passer in NFL history and that this team is hotter and looks even tougher than it was last year, there’s little reason to believe they can’t use that experience and build off of it with yet another championship three weeks from now.