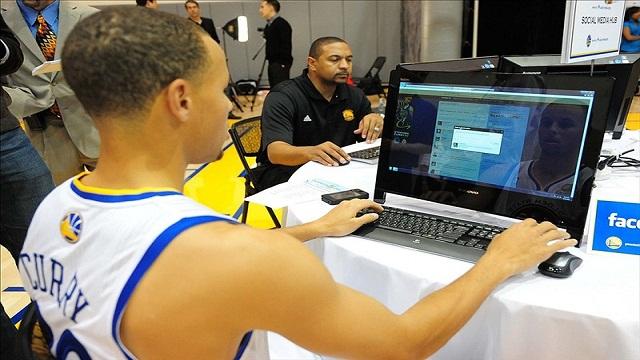 In the early days of social media, there was a lot of discussion about how great these services were as a brand extension for athletes, as a way to gain fans and make extra sponsorship money. (Consider Shaquille O’Neal, whose early adoption and careful cultivation of his Twitter brand was used as a marketing textbook case study.) Some of those benefits are still unquestionably there, but recent years have seen a lot of negatives too, with players getting in trouble for everything from anti-Semitic memes to bong videos to tweeting sex tapes, but also for various social and political comments, and some, like former NFL punter Chris Kluwe perhaps even losing their jobs as a result of expressing their views.

And a particularly interesting development is how much criticism has come not for hot-button political or social takes, but things that actually are sticking to sports, such as Kevin Durant’s alleged alternate accounts or takes on players or coaches, or Aroldis Chapman liking an Instagram comment calling Joe Girardi “a complete imbecile.”

Even when there isn’t actually any actionable cause or punishment, old postings are still exposed. We saw the latter this week with people mocking Cardinals’ running back Chris Johnson for his tweets that Adrian Peterson should get more carries, before Peterson was traded to Arizona and Johnson was cut. That says nothing of the regular trolling that many athletes get too, which sometimes becomes actual threats and harassment (especially for female athletes). It brings up questions of whether it’s worth it at all to express opinions on social media, better to take Erik Malinowski’s advice and don’t tweet, or to just use social media as a bland platform for links and marketing without weighing in on anything remotely controversial.

The answer probably is “be bland-ish” from a pure bottom-line perspective, but there’s more to it than dollars and cents (we’re not all Darren Rovell, after all), and there are even some potential financial benefits from being outspoken, on societal issues or sports. However, there are perils too, and those are becoming more and more significant these days. There’s a rising tide encouraging bland and inoffensive takes, even if that’s not necessarily the best or most rewarding approach for everyone.

Some of this discussion certainly touches on politics and the various arguments for and against a “stick to sports” approach, but the discussion’s perhaps even more interesting outside of that well-covered territory. Athletes know that anything obviously political on either side of the aisle is going to be seen positively by some and negatively by others, and it becomes a calculation of whether the sentiment they’re expressing is important enough to them to be worth the potential negatives.

But even off-the-cuff remarks on sports like Durant’s, Chapman’s or Johnson’s can draw plenty of criticism, both immediately and weeks and years later. And there are lots of people looking for any slip-up now, or going back through archives to find something that might be problematic. (See the drafting of Mitch Trubisky, and the uncovering of his thoughts on female anatomy and the Packers.)

That’s perhaps the core of the conversation here. In the early days of social media, much of the widely-discussed focus was on the positives, and what these new platforms could do for you. And that was a big part of what led to their widespread adoption by athletes. But the discourse over the last several years has shifted much more towards the perils of social media, and to leagues and teams developing formal policies and punishing those who step outside them. And beyond that, it feels like there are more people than ever looking to find when athletes say anything remotely controversial and quickly make hay out of it.

So while there’s still possibly value in the early emphasis on “be distinctive” and “show your personality,” you could make a case that many athletes’ bottom lines might be better off if they were totally bland on social media, and maybe even if they weren’t on it at all. “Be interesting” advice has often now shifted to “be inoffensive.”

But “be inoffensive” doesn’t always work, either. For one, it ignores the human aspect. Athletes are people, too, not just platforms for marketing their personal brand, and there’s certainly value in expressing what you think even when it might not be best for your bottom line. And that’s true on everything from the silly to the serious. Both sports takes and social thoughts can draw blowback, but there can be value in not censoring yourself, and opinionated takes can win you fans as well as critics.

It’s worth pointing out that those who have taken the other tack have also seen some success to go with the negatives. For example, there’s a good case that Kluwe was cut over his activism (he made it himself at Deadspin), but his prominent and opinionated social media presence has helped him land speaking gigs and a book, and helped his tabletop game raise almost $77,000 on Kickstarter. Of course, those projects presumably come nowhere close to what he was making in the NFL, and his tweets shouldn’t have got him cut in the first place, but there’s value to speaking up for what you believe, even if that comes with economic consequences, and being engaging, opinionated and controversial on social media can bring its own rewards. Like Kluwe, Colin Kaepernick has arguably been blackballed for his views, and his social media presence has been cited as a reason why. There are certainly economic consequences for him not having an NFL job, but Kaepernick has also won many fans and some additional plaudits for how he’s approached things.

On a less serious sports side, this has perhaps especially shown up in hockey in the rivalry between Sidney Crosby and Alexander Ovechkin. Crosby’s often described as being always on-brand and always all about hockey, which has led to some critics finding him boring, while Ovechkin’s often been more playful and more goofy, and that’s led to some critics saying he’s distracted. Neither characterization or criticism is probably entirely accurate. Crosby undoubtedly has interesting qualities and some off-brand moments, and Ovechkin undoubtedly takes hockey seriously as well, to say nothing of the charitable causes he’s involved with. But the differing personalities give us a look at on-brand versus off-brand. And the conclusion there may be that both approaches work. Both players have done what fits with their personality, and they’ve both found incredible success and plenty of fans for it.

In the end, it probably comes down to individual goals and individual tolerance. If you’re an athlete solely looking to bolster your own bottom line and not take any criticism, a bland, carefully considered social media presence has its merits. It also probably isn’t heavily boosting your profile, though; it’s maintaining it. But there’s a reason many prefer personalities over brands. At the other end of the spectrum, if it’s important to you to express stronger opinions on everything from politics to sports, that may lead to some benefits. But it can also lead to a whole lot of blowback (and even for things that don’t initially seem too controversial, such as Johnson’s tweet about Peterson).

In any case, it’s certainly worthwhile to ponder the benefits and perils of any social media approach. And that’s perhaps especially true with the drawbacks now playing a bigger and bigger role. That doesn’t mean that everyone should become bland and inoffensive, and hopefully it won’t. But it’s easy to see why some might choose a less risky, more safe approach rather than a “show off your distinctive personality” one these days. That’s not necessarily a good thing, but it’s becoming more understandable. And if more and more athletes become more boring on social media, fear of blowback may well be a reason why.

And maybe that’s the larger conversation here. Maybe social media users as a whole could stand to become less critical and less disagreeable, and show more tolerance to those who don’t always stay on-brand, even when they don’t agree with the sentiments expressed (whether those are serious or silly). And maybe not every “off-brand” athlete moment should become a media controversy. But the pushback for many of those opinions is real, and it seems to be growing. Hopefully, plenty of athletes and will continue to be themselves or else social media may get a lot less interesting, but it’s also understandable if some decide it isn’t really worth it any longer.

2 thoughts on “Is there a rising push for athletes to be inoffensive, rather than interesting, on social media?”