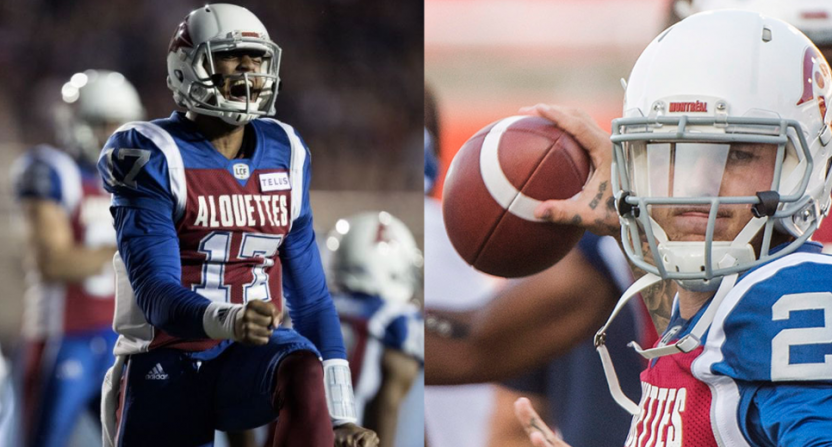 There’s been a whole lot of talk about Johnny Manziel in the CFL this year, from his belated signing with Hamilton to his preseason debut to his time riding the bench to his trade to Montreal to his inglorious four-interception debut to his placement in the concussion protocol days after a hit in his second game. But, even with Manziel coming out of that protocol this week and practicing with the team, he’s been named the backup quarterback to Antonio Pipkin for the Alouettes’ game against the Ottawa Redblacks Friday (7:30 p.m. Eastern, TSN/ESPN+).

Pipkin, in just his second year in the CFL (after a successful NCAA Division II career with Ohio’s Tiffin University) and with just one career appearance (2-for-9 for 14 yards in relief in last year’s regular season finale), led the 2-8 Alouettes to their second win of the season last week (a 25-22 victory over the Toronto Argonauts), and head coach Mike Sherman has elected to stick with him for now despite Manziel’s return to health. Could that mean that Manziel will follow the route of Wally Pipp, who infamously lost his starting job to Lou Gehrig thanks to injury, and get Pipped by Pipkin?

On a profile level, Manziel obviously has Pipkin beat. Manziel won the Heisman Trophy as a redshirt freshman with Texas A&M (where Sherman initially recruited him) in 2012, and went on to perhaps even a better year statistically in 2013 before Cleveland drafted him 22nd overall in the 2014 NFL draft. And while his time in Cleveland didn’t work out (he was eventually released in March 2016), there are plenty of reasons to think he’s still a skilled quarterback, and his age (he’s just 25) has both CFL and NFL teams interested in his future.

Meanwhile, Pipkin recorded 499 completions, 58 touchdowns and 15 interceptions in 23 games over three years for the Tiffin Dragons, and wound up signing with the NFL’s Arizona Cardinals after going undrafted in 2017, but he didn’t last long there. He signed with Montreal two months later, but never played until that final game of the season (despite all their quarterback issues), and was thoroughly unimpressive there. And they cut him this June, but then brought him back after injuries to others. So the biggest thing he has going for him right now is his showing in his two CFL starts, which saw him complete 14 of 25 pass attempts for 217 yards with one touchdown and one interception in his debut two weeks ago (a 40-24 loss to Edmonton) and 22 of 32 attempts for 303 yards with no touchdowns and an interception in last week’s 25-22 win over Toronto. He’s 23, so he has a slight age advantage over Manziel, and he’s performed better in the CFL to date, but he certainly doesn’t have anywhere near the profile.

Of course, it’s far too soon to presume that Manziel is out of contention. The attention and merchandise sales around him, to say nothing of the assets the Alouettes expended by trading for him,  mean he’s likely to get another chance if there are any sort of struggles from Pipkin, and that may even happen tonight. You can imagine that Pipkin is going to be on a short leash, and that Manziel will be coming in if things get rough. And the Alouettes also could use the logic that Manziel hasn’t practiced much since his concussion and should be eased back in. So it’s definitely going to be challenging for Pipkin to hang on to that starting spot. But it’s interesting that he’s received that opportunity at all with Manziel healthy, and that Montreal has shown this much faith in him. We’ll see what he can do with that.

1 thought on “Could Johnny Manziel get Wally Pipped as the Alouettes’ starting QB by Antonio Pipkin?”