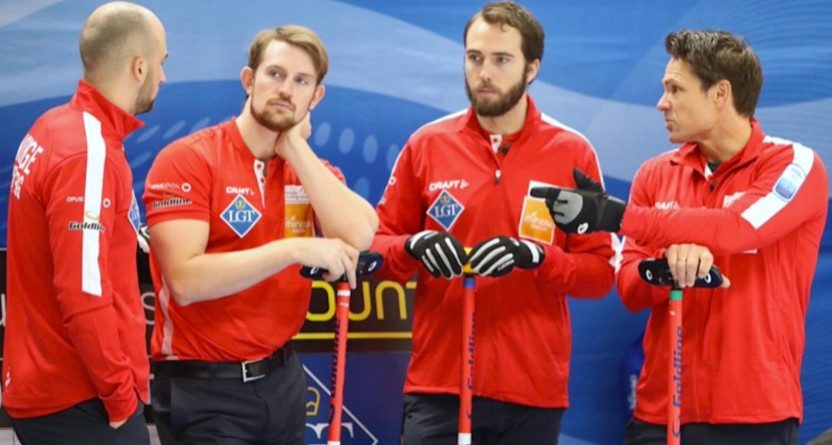 There have been no shortage of officiating controversies in sports recently, but one from the European curling championships really takes the cake. Or rather, the broom. As the CBC’s Devin Heroux reports, Norway’s men’s rink (seen above) beat England 9-5 Sunday, but then was told after the fact they’d have to forfeit…because alternate curler Magnus Nedregotten, who subbed in in the sixth end (with Norway up 8-3), brought in his own officially-approved broom instead of using the broom of the curler he replaced.

A short time later Norway was informed they would have to forfeit the win because Nedregotten had used his broom instead of that of the player he replaced.

According to rule C3 (g) of the World Curling Federation’s rulebook: “If an alternate player comes into a game, that player must use the brush head of the player being replaced. Penalty: If a new brush head is brought into the game, the team will forfeit the game.”

According to Steffen Walstad, Norway’s third, “After sweeping a couple rocks we were informed that in fact [Nedregotten] should use the broom of the player he was replacing. We switched brooms, thanked the umpire for the heads up and played the remaining two ends before England conceded the game in the eighth end.”

According to the World Curling Federation: “Norway contravened … rule C3(g) relating to the use of a brush by a substitute, resulting in Norway forfeiting the game.”

This seems like one of the more ridiculous rulings in a while. Yes, broom composition can matter; as Heroux writes, there was a giant controversy (“Broomgate 1.0”) in 2015 over a new material used on brooms, which led to that material being banned and to brooms having to be inspected by officials pre-match. But it seems silly to say that an approved broom all of a sudden isn’t legal because it’s not the broom the previous player was using. (And that also seems to further restrict substitutions, as brooms are highly customizable and individual; why should a substitute have to use someone else’s broom?) This application of the rule got roasted by several prominent curlers on Twitter, including former world champions Ben Hebert and Brent Laing:

Jesus Christ…. This is embarrassing but I’m not surprised coming from @worldcurling . They like to pretend like there more important than the game and the players! 🤷🏻‍♂️👎🏻 What a joke..

Did this really happen? @teamulsrud @worldcurling tell me this is a joke of some kind that I don’t underatand? And I know it’s not England’s fault, but how do they accept this win? This needs fixed ASAP. Our sport and our athletes deserve much much better than this. #ECC2019 https://t.co/l4xbxRIBmy

In this case, it appears that the key part of the problem is with the curling federation for having this silly rule in the first place, and especially for stating that the penalty involved shall be a forfeit of the game without any consideration for how long the “wrong” broom was used and the impact the broom had. The officials are following the rules as written, and the rules don’t provide any latitude for interpretation. But a unequivocal forfeit for using the wrong equipment seems like a terrible idea, and something that’s not common in most sports.

For example, illegal NHL sticks can lead to a penalty (and sometimes an important one!), but not a forfeit. And illegal MLB bats can lead to the batter being called out and ejected, but not to a forfeit. MLB even famously provided the classic example of overriding a rule whose impact seemed outsized relative to the infraction, with the eventual reversal of the on-field call in the 1983 Pine Tar Game. The World Curling Federation would have been smart to do something similar here, as England wasn’t winning that match down 8-3 in the sixth regardless of which Norwegians were playing and what brooms they were using.

And this could have quite the impact on the standings. As of Monday, this forfeit was England’s only win in five matches. And the loss meant that Norway was 2-3 and tied for sixth instead of 3-2 and tied for third. Determining that a use of the “wrong” broom for a couple of rocks should lead to an outright forfeit of an entire match, one that dramatically changes the match’s outcome and potentially the tournament’s outcome, feels way over the top. It’s understandable why the governing body is being blasted for that.