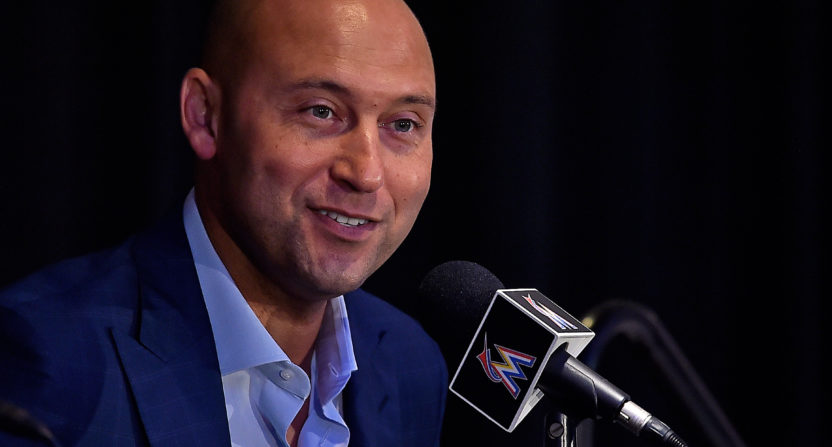 On Wednesday, Sports Illustrated‘s Tom Verducci dropped an in-depth exclusive titled, “The boss is here: Inside Derek Jeter’s quest to turn around the Marlins.”

The full article is worth a read, but for the purpose of this post, we’re just going to focus on one excerpt.

Jeter was telling Verducci about the well-documented Marlins town hall meeting/train wreck in December, and said how he was told by a fan that “all you needed to do was sign two pitchers.” Instead, Jeter and the Marlins of course chose to trade away Giancarlo Stanton, Christian Yelich, Marcell Ozuna, and Dee Gordon.

Well, Jeter said that even if the Marlins had added frontline free-agent starting pitchers Yu Darvish AND Jake Arrieta, the team “still wouldn’t have won.”

“When we were at the town hall,” says Jeter, referring to an event when he took questions from season ticket holders last December, “one of the fans said, ‘All you needed to do was sign two pitchers.’ I said, ‘Okay, who are those two pitchers?’ He couldn’t answer. You could have added two pitchers to this team and they still wouldn’t have won.”

“No,” Jeter says. “They still wouldn’t have won. So you just dig a bigger hole, and eventually you have to get out of it. That’s a lot of work.”

Stanton, Yelich, Ozuna, and Gordon combined to be worth 20 wins above replacement in 2017 (according to WAR for both Baseball Reference and Fangraphs).

Even though it would be difficult for the players to combine to average 5-WAR again, you could expect at least 15-WAR from them in 2018. Stanton, Yelich, and Ozuna formed the best outfield in MLB last season. We know that Stanton and Yelich are consistent stars, and Ozuna was a top-10 outfielder in 2017. Gordon has been a 3+ WAR player three times over the last four seasons, and is a dynamic player that led MLB in stolen bases in 2017 (60), to go with very good defense at second base.

Then you add in catcher J.T. Realmuto (who’s likely the next one to be traded), a 26-year-old that was worth 3.5+ fWAR each of the last two seasons, and first baseman Justin Bour, owner of 25 dingers in 2017. This is a damn good set of position players.

In fact, the Marlins’ position players ranked only behind the Astros, Dodgers, Yankees, Indians, Cubs, and Nationals in fWAR in 2017. Notice a common theme with those six other teams? They all made the playoffs.

Miami’s issue in 2017 was, you guessed it, pitching. The starting rotation had an ERA of 5.12 and FIP of 5.02 (both the fifth-worst marks in MLB). The unit threw 830 2/3 innings, more than only the Reds. The Marlins’ top starting pitcher in 2017, Dan Straily, was worth 2.0 fWAR, just 68th-best for MLB starting pitchers. He was the only Marlins pitcher to even throw at least 155 innings.

Before the Marlins’ trades this offseason, they projected to be around an 80-win team on paper, which sounds right after they won 77 games last season. This is despite their starting pitching projecting to be the 28th-best unit in baseball, and not having a single guy projected for 2-WAR.

So add in Darvish and Arrieta to replace, well, replacement level pitchers, and you’re looking at a 5-to-8 win record boost on paper (and the bullpen — which led MLB in innings pitched in 2017 — would be less taxed). That’s significant, and would have the Marlins potentially in the mid-to-upper 80s in the win department. Would they beat out the Nationals for the NL East? Probably not, but there’s a fairly realistic chance. And they would immediately be one of the favorites to get one of the two NL Wild Card slots (both FanGraphs and Baseball Prospectus/Pecota have 84 wins as the No. 2 Wild Card slot right now).

But Jeter’s excuse to fans that the Marlins “still wouldn’t have won” is bullshit. This would’ve been a playoff-contending team on paper if the front office left things as they were and added two good starting pitchers (even if they weren’t at the Darvish, Arrieta level). And if you can get into the October tournament, you have a very real shot to win championships. Less talented rosters have won titles.

Instead, the Marlins gave away four excellent players for mostly garbage, are set to be probably the worst team in 2018 with very little hope to be competitive the rest of this decade, and have their new ownership constantly feeding the fanbase laughable reasoning for this total embarrassment.