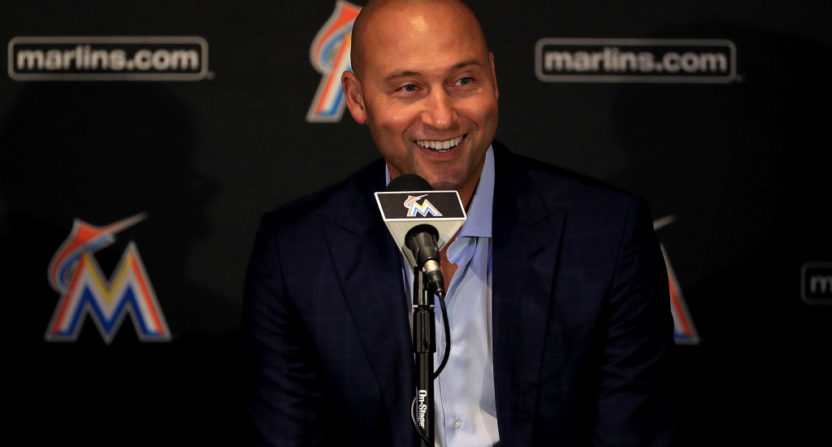 Derek Jeter has a plan.

Not one he cared to outline in any specific detail at a recent town hall meeting with season ticketholders, a meeting that saw Jeter come face-to-face with Marlins Man. Nor was it a plan crafted at MLB’s Winter Meetings, which he skipped to catch Jay Cutler’s Miami Dolphins on Monday Night Football.

But it’s a plan nonetheless, and one that was presumably kicked off when the Marlins traded Giancarlo Stanton and Marcell Ozuna, two of the team’s three best players, for what amounted, essentially, to salary relief. Jeter’s plan, then, is a business plan.

And while every baseball team has to work to ensure their baseball operations and business operations are in concert, few franchises so clearly favor the latter over the former the way the Marlins have done under Jeffrey Loria, and now under the new ownership regime, a group many assumed would be better by default. Whoops!

Barry Jackson of the Miami Herald has an exclusive out tonight that details Jeter’s plan, which essentially falls just short of Jeter donning a striped suit and extolling the virtues of monorails in musical fashion.

Marlins CEO Derek Jeter, who has slashed about $36 million in player payroll in recent weeks, in August circulated a document to potential investors that projects the Marlins will make an enormous profit in 2018 and sizable profits the following three years.

Project Wolverine, Jeter’s confidential document given to potential investors and shared with The Miami Herald by two of those approached investors, includes ambitious revenue goals for tickets, sponsorship and television rights.

The new ownership group is poised to make a profit next season because of the slashing of payroll, combined with the fact that every MLB team next spring will receive a one-time payout of $50 million as a result of MLB’s sale of digital media company BAMTech to Disney. But the amount of the Marlins’ profit could vary widely based on several factors.

That every team is going to start out with $50 million is one thing; the Marlins were also as recently as 2015 projected to be receiving $50 million annually in revenue sharing. Let’s just cut that in half, for the sake of being conservative, and we have $75 million coming in the door right away, that has nothing to do with Derek Jeter, or indeed anyone. Your family dog could be in charge of the Marlins and they’d still be bringing in tens of millions of dollars by virtue of being an MLB franchise, which is why these entities sell in the billions.

(Also your family dog would have insisted on a greater return for Stanton.)

The document projects a big spike in attendance revenue in 2018, which would seem difficult to achieve in the wake of trades involving Giancarlo Stanton, Marcell Ozuna and Dee Gordon.

That’s just about the nicest way Jackson could have said that. It’s lunacy! It’s the equivalent of going to investors and “projecting” that your imaginary cheesecake delivery service is going to be worth $2 billion in sales next year, so they should go ahead and buy you out now for $1 billion.

The final bullet, though, might be the most fanciful, as Jeter clearly expects the local broadcast bubble to be expanding rapidly for another half-decade, or more, which is the kind of sharp investment eye you’d expect from someone who swung a piece of wood for a living. Is that reductive? Yes! But seriously, here’s the plan:

The Marlins’ longterm TV deal with Fox Sports Florida, negotiated by the previous ownership group, expires after 2020 and will pay the team $17 million, $18 million and $20 million over the next three seasons — the lowest in baseball.

Sure, that seems likely. Jackson quotes an expert in rights fees who thinks $40 million is more likely, and it’s just as easy to envision a world where the broadcast model is wholly different in just a few years.

Essentially, Derek Jeter’s plan (and we’re using Jeter’s name as he’s the face of this group, though clearly not all of this is his doing) was trade away all the good players being paid like good players, play worse players, and somehow increase paid attendance and also have a team people want to watch on television within a few years, to the point they’ll be worth $50 million+ annually just on the broadcast side.

But hey, Miami isn’t that far from Disney World, and monorails seem to be working out fine there, after all.