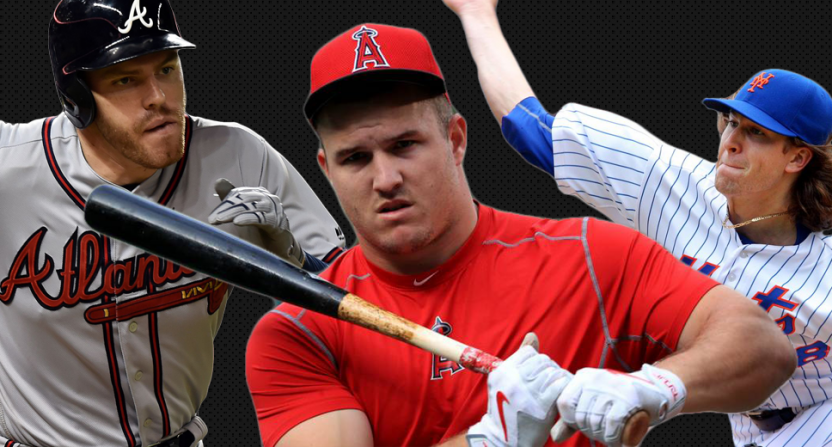 About six weeks ago, we checked in on the various MLB awards races, anointing A.J. Pollock the NL MVP front-runner and Shohei Ohtani the man to beat for AL Rookie of the Year.

Sometimes things change in a hurry.

Now, as the season’s midway point approaches, we figured it was time to update those picks and offer a sense of who leads the pack for AL and NL MVP, Cy Young, and Rookie of the Year. To be clear: These are not predictions of who will win the awards after the season, merely reflections of who would deserve them as of this (relatively early) point. Without further ado…

Last time we did this, Trout just barely edged Mookie Betts. Now, it’s not even close. The best player in baseball is having his one of the best seasons… ever, batting .335/.469/.689 with an AL-best 23 home runs, while stealing 13 bases and playing excellent defense. With 6.5 WAR (per Baseball-Reference,) through only 73 games, Trout is on a genuinely historic pace.

Props to Betts, Jose Ramirez, Justin Verlander, Francisco Lindor, and a host of other truly awesome players, but there’s just no one on earth who can keep up with the Angels’ centerfielder.

From what was once a mess of semi-qualified candidates has emerged a front-runner. Freddie Freeman has always been good, but this season he has ascended to a new level, batting .333/.422/.583 and contending seriously for the slash-line Triple Crown. He leads NL position players in FanGraphs WAR (while ranking second in Baseball-Reference’s version) and gets bonus points for helping to carry the Braves to first place in the NL East.

Freeman’s closest competition comes from pitchers. Yes, the Mets have largely squandered Jacob deGrom’s brilliance, but that’s not his fault. He has provided plenty of value (via a sparkling 1.51 ERA), even if the Mets haven’t taken advantage. And as great as deGrom has been, Max Scherzer is right there with him, with a 2.06 ERA in a league-high 100 2/3 innings. The NL position-player pool is a bit underwhelming behind Freeman, but Lorenzo Cain and J.T. Reamuto have quietly enjoyed excellent years both offensively and defensively.

Verlander is the guy to beat here, but the race remains very much up for grabs.

The NL’s three best pitchers this season all reside in the East. deGrom has been consistently brilliant even as his team has faltered around him, posting the best ERA in the major leagues, while Scherzer ranks second in ERA but leads in innings, strikeouts, and FIP. But don’t sleep on Nola, the 25-year-old breakout ace, who has quietly been a formidable workhorse in Philadelphia.

AL Rookie of the Year

Shohei Ohtani’s UCL injury clears the way for Yankees phenom Gleyber Torres to run away with this award. After all, 21-year-old infielders hitting .291/.346/.566 with 14 home runs and sturdy defense don’t come along every day.

Still, this race is no rout. Even after several weeks on the disabled list, Ohtani stacks up against anyone, while several under-the-radar rookies, led by Houston catcher Max Stassi (.264/.338/.504), have shown they’re worth keeping an eye on.

NL Rookie of the Year

Phenoms Ronald Acuña and Juan Soto have drawn the headlines, but neither has done enough quite yet to reach the top of this crowded field. That means the front-runner, for now at least, is 25-year-old Marlins outfielder/third baseman Brian Anderson, who has quietly posted a .294/.373/.423 slash line thanks to 30 walks and 20 doubles. He’s followed by a pair of highly touted right-handed pitchers: the Dodgers’ Walker Buehler (2.63 ERA in 51 1/3 innings) and the Cardinals’ Jack Flaherty (2.66 ERA in 50 2/3 innings).

Needless to say, this race could look very different by the end of the season, once Soto and the currently injured Acuña have played more games.

4 thoughts on “MLB awards tracker: Where do MVP, Cy Young, Rookie of the Year races stand as midpoint approaches?”