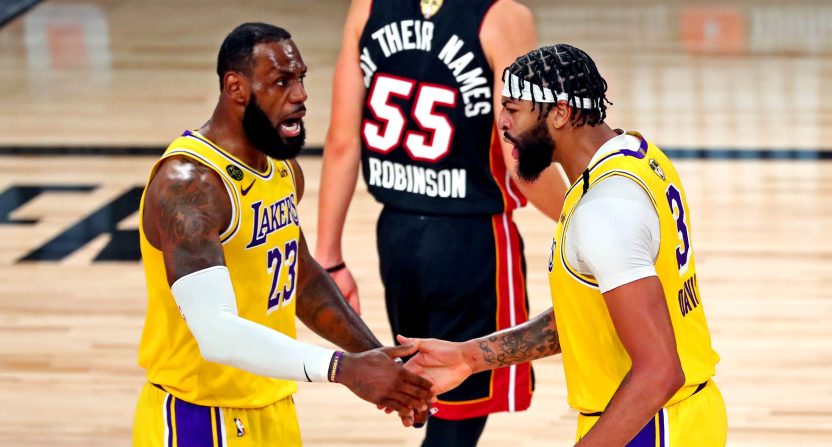 No matter how it shakes out in the end, it’s hard not to see this Los Angeles Lakers season as a complete failure. While qualifying for the play-in tournament and making the playoffs remains possible, the fact that a team that includes LeBron James, Russell Westbrook, Anthony Davis, and Carmelo Anthony is even in this position seems absurd.

Their fans have been booing them, opponents have been openly trash-talking them, and they seem to keep setting new lows for futility. Even TV analysts have been demanding to see less of them.

While LeBron discusses leaving one day soon to play with his son and Westbrook is really hung up on people calling his names, Davis has found himself on the bench for a significant amount of the season once more dealing with injuries.

Given the ages of many of the Lakers’ stars and the way this season has gone, it’s easy to assume they might just blow things up next season and try to figure out a new plan. While LeBron is LeBron and he dictates everything about his career, many have wondered if the Lakers might try to move Davis while they still can. And one NBA insider thinks it’s a foregone conclusion that the discussion will happen.

“I think it’ll be something that’s discussed,” ESPN’s Brian Windhorst said on a recent episode of Get Up. “I think it would be a mistake because you’re still talking about a guy — when healthy — who is a top-15 player. You’re not going to be replacing that.”

Of course, the Lakers’ No. 1 job is keeping LeBron happy and he is eligible for a contract extension this offseason. So it’s likely that the team will have to consult James on whether or not he’d be happy trading Davis and, if so, what they’d need to get in return in order to ensure that he extends his deal.

“In August, LeBron is eligible to sign a contract extension. He will evaluate the moves of June and July and then extend or not,” Windhorst said. “This is going to be a very delicate couple of months when this season is mercifully over.”

When he’s healthy, Davis is among the best players in the NBA. However, he’s not healthy that often. So it will be interesting to see how strongly the team pursues the possibility of trading Davis and, if so, what they can get for him.