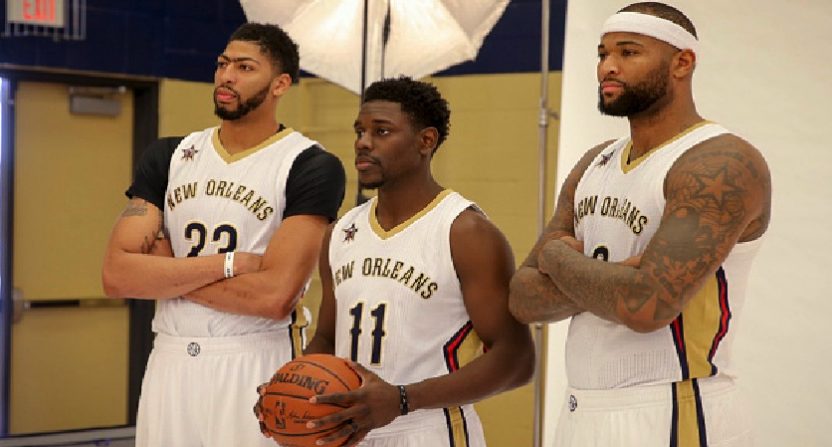 The NBA trade deadline for the 2016-17 season has now come and gone, with several relatively small to mid-size deals being completed on Thursday. The face of the NBA didn’t change very much, but there’s still plenty to discuss despite a pretty boring deadline day.

Which contenders improved? Which rebuilding teams positioned themselves for a brighter future? Which teams failed to cash in on a big-time opportunity?

Here are our winners and losers of the 2016-17 NBA trade deadline.

It’ll be fascinating to see how the Pelicans’ offense works with Cousins and Anthony Davis, two of the league’s top big men, both patrolling the floor. New Orleans is currently 2.5 games out of the eighth spot in the Western Conference and this trade could push it past other playoff contenders, but the deal NOLA got from Sacramento made the swap a no-brainer. More on the actual package the Pels gave up later.

Without this trade, New Orleans would have had no opportunity to get an All-Star caliber player in his prime. So it was an easy choice to make, no matter how things turn out with the mercurial Cousins. And for that, NOLA is the big winner this week.

Toronto Raptors
Raptors president Masai Ujiri has once again proven his value as one of the league’s top executives. After going 8-9 in January, in part due to lack of depth in the frontcourt made worse by an injury to key rotation cog Patrick Patterson, Ujiri made two trades to shore up the team’s forward depth and improve Toronto’s middling defense.

Serge Ibaka came over last week from Orlando in exchange for Terrence Ross and a first-round pick after the Magic realized that Ibaka had no intention of re-signing with the team this summer. Ross’ departure frees up more minutes for promising young wing Norman Powell and Ibaka provides good defense — though not the elite level D he once showed — and versatility to allow head coach Dwane Casey use a lot of different looks on the floor.

Acquiring P.J. Tucker from Phoenix on Thursday, for a pair of second-round picks and Jared Sullinger — a disappointing free agent signing who got hurt and never really got back in playing shape — is another coup for Ujiri and the Raps. Tucker is another forward obtained for a low price who can defend and help the team out at the end of its rotation.

With young point guard Cameron Payne stuck behind Westbrook, he deftly sent a package of players —which didn’t even include top perimeter defender Andre Roberson — to Chicago to acquire veteran big man Taj Gibson and sharpshooter Doug McDermott from the Bulls. Gibson gives the Thunder an imposing interior defensive duo alongside Steven Adams, and comes with Bird Rights to allow OKC to re-sign the upcoming free agent if they so choose.

McDermott, 25, is shooting 37.6 percent from three this year and should get more open looks with Westbrook drawing attention from opposing defenses. A change of scenery should do him well.

Dallas Mavericks
The Mavs need good young talent to build around Dirk Nowitzki and Harrison Barnes. They definitely found it by acquiring Nerlens Noel from Philadelphia.

Noel, just 22, has dealt with an injury this season and a crowded young Sixers frontcourt, only playing in 29 games (seven starts) this season. He started 62 games in 2015-16 and averaged over 11 points and eight rebounds to go with 1.8 blocks and 1.5 steals per game. He’ll likely be better than the first-rounder (top 18 protected) in 2017 sent to Philly, and unless Dallas somehow gets into the top 12 this season, two second-rounders will be conveyed instead.

Dallas also sent out veteran Andrew Bogut in the deal, but the mission to get a good young big man was definitely accomplished.

Houston Rockets
Not only did Houston improve its bench this week, it also set itself up well for an even better outcome during next week’s buyout season.

Lou Williams, as I discussed on a podcast earlier this week, is second among shooting guards in ESPN’s Real Plus Minus metric and will add a big-time scoring punch to the Rockets’ bench. Giving up Corey Brewer, who’s struggled offensively, and likely the 26th or 27th pick in this year’s draft to the Lakers is a worthy price to give up for Williams.

The Rockets then cleared up roster and salary space by sending K.J. McDaniels to Brooklyn and Tyler Ennis to the Lakers. Now Houston has the opportunity to lure veterans like Bogut, Deron Williams or Matt Barnes for a postseason run as perhaps the most viable threat to Golden State in the Western Conference.

Brooklyn Nets
When you have the league’s worst record and don’t control your own first-round pick until 2019, it’s going to take a lot of small steps to return to respectability. General manager Sean Marks made two of those steps this week.

Marks turned Bojan Bogdanovic, a nice bench shooter averaging just over 14 points per game this season, and a former first-round pick in Chris McCullough who the team was reportedly disappointed in, into a desperately needed first-round pick. Brooklyn will now have two in the low- to mid-20s at the end of June. That’s not great, but it’s a start.

With $4 million to spare under the salary floor, the Nets took McDaniels back from the Rockets in a no-risk move. McDaniels is an energetic wing who can play good defense and is under a very team-friendly contract through next season. Are these earth-shattering moves? Hardly. But it’s going to be a long rebuild for Brooklyn, and these were positive moves.

Sacramento Kings
With Cousins gone — and the team happy because now they can have a new, better team culture, or whatever — to New Orleans, when’s the next time the Kings are going to have a player in the All-Star game?

Will Buddy Hield, the reported obsession of principal owner Vivek Ranadive, ever get to that level? Probably not. Novice general manager Vlade Divac only managed to get one first-round pick in this deal, which the Nets got for Bogdanovic and the Lakers got for Lou Williams. The rest of the haul, an early second-rounder, an end-of-the-rotation guard in Langston Galloway and Tyreke Evans’ expiring contract, doesn’t even come close to moving the meter.

Where does this leave the Kings? In a long rebuild where it potentially may not control its own first rounder this year — after making a disastrous 2015 trade with Philadelphia in which it has 2017 swap rights AND its unprotected 2019 first, just to free up money to sign Rajon Rondo (not on the team), Marco Belinelli (traded for Malachi Richardson, who’s played 198 minutes the entire season) and Kosta Koufos (19.1 minutes per game) — it leaves the Kings irrelevant and a toxic laughingstock with the least hope of any NBA franchise.

Chicago Bulls
The Bulls’ veteran experiment of signing Rondo and Dwyane Wade has not gone according to plan, so the dynamic management duo of Gar Foreman and John Paxson (AKA GarPax) decided to finally try to find its point guard of the future after trading Derrick Rose to New York last June.

Chicago was reportedly adamant that it wouldn’t trade Gibson for anything less than a first-round pick, which clearly didn’t happen. For a Bulls team already dead last in 3-point makes, attempts and percentage, trading McDermott only makes the worst shooting team in the league even more horrendous. All in all, not a great move by GarPax unless Payne turns into a star-level player.

Philadelphia 76ers
For the last month or so, Philly went on a highly publicized search to free up its young frontcourt logjam. Jahlil Okafor was held out of several games as the Sixers tried to extract the optimal trade package for the former Duke star.

Now Okafor stays and Nerlens Noel goes, for a suboptimal package: perhaps a mid-first round pick, Bogut (who will be bought out) and an intriguing wing prospect in Justin Anderson. The Sixers got a couple of second-rounders for Ersan Ilyasova, who was dealt to Atlanta on Wednesday, but it was hardly the asset-building success the team probably had in mind.

The question now is, what do you do with Okafor? He’s a guy you told for weeks that you wanted to deal away, and now you have to bring him back into the fold and try to pretend like nothing happened? Probably not the process Philadelphia had in mind.

Indiana Pacers
Paul George remains with Indiana, but for how long?

George is reportedly “hell-bent” on signing with his hometown Lakers, now led by his boyhood idol Magic Johnson, following the 2017-18 season, and time is running out for Larry Bird and the Pacers to figure out what to do. Indiana shooed away Boston’s reported overtures to try to acquire George, but then Bird failed to acquire anyone to help out the current roster and improve from its current mediocre state.

The Pacers are currently a franchise in limbo, and they can now do nothing to help themselves until after the season.

New York Knicks
The Knicks are going nowhere, and did nothing to change that this week.

The biggest news for the Knicks today? Owner James Dolan pledged $300,000 to the Trump campaign and Dolan foil Charles Oakley will be a courtside guest of Cleveland ownership when New York visits the Cavs Thursday night.

New York failed to trade Derrick Rose to Minnesota for Ricky Rubio, which would have helped the team defensively and allowed Kristaps Porzingis to be a larger part of the offense. Nor did the Knicks trade Carmelo Anthony and end that drama. They also didn’t flip any veterans like Brandon Jennings or Kyle O’Quinn into assets that could help the team in the future.

Essentially, Knicks fans have no real reason to watch the team the rest of the season. When you’re a team that’s universally considered to be a hot mess, maintaining the status quo is probably not a great thing.

Orlando Magic
After cutting its losses with the Ibaka trade to Toronto last week, Orlando made a lot of noise in terms of shaking things up and getting a bold-face name like Andre Drummond or Reggie Jackson.

Orlando still has too many big men, a point guard in Elfrid Payton that the team may not think is its long-term solution at the position and no real concrete direction going forward. The Magic have a lot of questions on this roster, and it may be a while until they begin to find some answers.