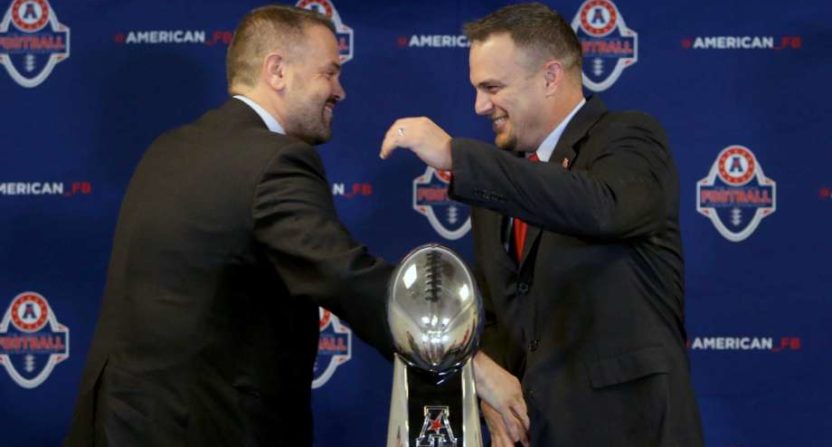 Every week leading up to the new college football season, our staff at The Comeback comes together to respond to one question facing the conference highlighted in our 2017 preview coverage. This week, our attention has been on the Big 12, a conference that now includes both the oldest and youngest active coaches in the FBS.

With Bill Snyder (will turn 78 in October) at Kansas State and Lincoln Riley (will turn 34 in September) now tabbed as the head coach at Oklahoma, the Big 12 has quite the generational gap within its coaching ranks. In addition to Riley at Oklahoma, the conference also injects some new blood with coaches on the rise like Tom Herman at Texas and Matt Rhule at Baylor (both in their early 40s). So, looking forward, where do we see the Big 12 heading with these new coaches coming in on top of recent additions like Matt Campbell (37) at Iowa State?

The Big 12 is home to the oldest active head coach (Bill Snyder) and the youngest (Lincoln Riley). To say there is a generational gap in the Big 12 goes almost without saying, but where do you see the Big 12 going in the next few years with coaches like Riley, Tom Herman, and Matt Rhule?

Matt Lichtenstadter: The Big 12 is an interesting dichotomy in coaches, from the old hand in Bill Snyder to just about everyone else who is young and up-and-coming. With the end of Snyder’s career closer than ever, the time is now to focus on the crop of coaches who will lead the conference forward such as Riley, Herman, Rhule and maybe even those like Kingsbury and maybe even a Matt Campbell.

Riley and Herman inherit blue blood programs with gigantic expectations every year, and both face immense pressure this season for different reasons. Riley still has a team that is capable of winning the conference despite the sudden Stoops retirement, and Tom Herman is the anointed one at Texas to bring the program back to its glory days. Therefore, both might not have incredibly long leashes to perform. Oklahoma is set up better than Texas for immediate success, let alone Baylor, but these young coaches come with big expectations in an unsettled conference so in many ways, the one that holds up the best will end up leading the pack. For this conference to really step up in

For this conference to really step up in weight class, one of these young coaches really has to take the reigns in the conference. Herman and Riley can both do that, and maybe they’ll play each other twice this year to set up the race for the future.

Bart Doan: There may be a generational gap in terms of which coaches might be watching 60 Minutes on Sunday night and which are watching episodes of Catfish, but in terms of football success, the model really doesn’t change a whole lot. The best coaches — from 70-something to 30-something —  all do the same thing well: find guys who fit their program’s needs and coach them up. Yes, there are several different ways to skin a cat, and Bill Snyder has found much of his cutlery and pelts in the JUCO ranks, but it’s really no different than a Tom Herman, Mack Brown, Bob Stoops, and on and on.

The Big 12 has faced the late-90s Pac-12 narrative of super high-flying offenses and meek defenses that cannot hold up at the championship level. That negative stigma, combined with a conference with only 10 teams that doesn’t allow for the more commonplace “two divisions, Conference Championship with the winner of each” has been tough to overcome even if it’s sort of a lazy narrative.

But the reality is, the only way it changes is on the national stage in a CFB Title type of victory. The Big Ten couldn’t win at the national level — until Ohio State did. The Pac-12 was all offense and no defense until Pete Carroll came in and proved that was a bit of a myth. We know Oklahoma has beaten Alabama recently on a national stage. But to simplify it: skeptics will be willfully and blindly skeptical until proven otherwise. In short, the conference is headed in the direction of a collection of middle-aged, highly entertaining characters and mostly all offensive minds. All it will need is a big win on the biggest of stages and that narrative goes “poof!”

Kevin McGuire.: I think this is an exciting time to be a fan of the Big 12. With coaches like Tom Herman and Matt Rhule coming into their new jobs, I think each will find ways to continue to build a solid foundation. At the same time, Oklahoma has placed its trust on Lincoln Riley to lead the Sooners and I don’t think they would do so if they didn’t feel he was ready for the job. Overall, having fresh faces in these jobs is nice, as both Herman and Rhule have proven themselves in the AAC and all three should be optimistic about the future for various reasons. And while Matt Campbell is doing his thing at Iowa State, one has to suspect that Kansas State is nearing a coaching change that will see a much younger face take the helm by default at some point in the near future.

This can be a good thing for the Big 12, as younger coaches bring new ideas to the table. But ultimately, these coaches still have to win on the biggest of stages in order to create a positive image for the Big 12 as a whole. Tom Herman has beaten Florida State, Oklahoma, and Louisville, but he has also failed to play for a conference championship he was expected to win easily as well. The point being, it is not time to anoint him a champion in Austin just yet. This is a work in progress for the entire Big 12, but with these younger coaches providing some stability and showing an ability to form a blueprint and stick to it, the Big 12 should continue to be a fun league to watch. But catching up as a whole to the SEC, ACC, Big Ten and Pac-12 remains in question.

Yesh Ginsburg: It’s a risk, certainly. Top coaches from small schools often have success, but there is not quite the proven track record that other coaches can have. When Nick Saban came to Alabama, we knew a national champion-caliber coach was coming to Tuscaloosa. Same with Urban Meyer in Columbus. Jim Harbaugh had proven success at both Stanford and in the NFL. Brian Kelly had won two championships in a power conference before going to Notre Dame. All of these coaches had proven themselves on a big stage before moving on up to some of the top teams in the game.

Terry P. Johnson: Not too long ago, many in the media said that the ACC was dead. The league was clearly a step behind the other Power 5 conferences, and almost never earned an at-large bid in the BCS. But, over the course of a few years, the league got better, and is now arguably the best conference in the land.

That, my friends, is what will happen in the Big 12 over the next five to 10 years, thanks to these outstanding coaching hires. Matt Rhule turned perennial doormat Temple into a conference champion in just four years, so there’s no reason to think that he won’t eventually do the same at Baylor. Tom Herman proved what his offense could do at college football’s highest level, thrashing Alabama’s vaunted defense so badly that Nick Saban brought him in for a visit. And, while Lincoln Riley hasn’t been a head coach before, his track record as offensive coordinator leaves little doubt that he’ll be successful.

Of course, it’s not just the coaches of the teams at the top that will make the league better. I like what David Beaty and Matt Campbell are doing at Kansas and Iowa State, respectively. Don’t be surprised if either – or both – are playing in a bowl game in the next two years.