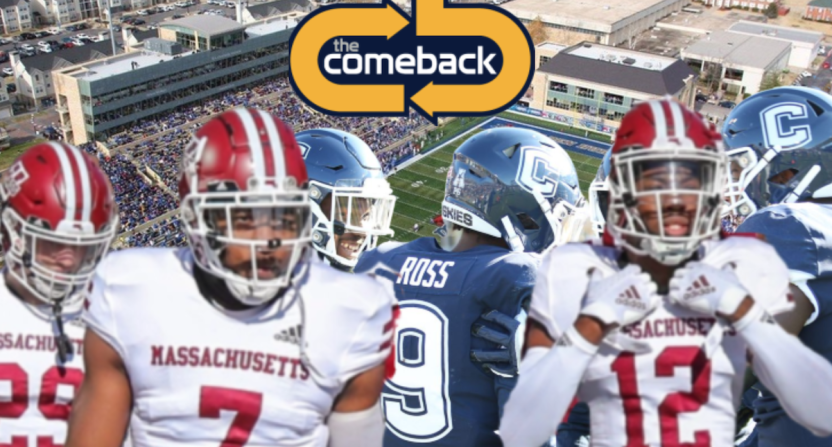 UMass AND UConn in a bowl game? U gotta be kidding.

Congratulations Massachusetts (1-11) and Connecticut (1-11)! You’ve been invited to play in the fifth annual TheComeback.com Bowl. It’s college football’s premiere showcase event to determine the worst team in the FBS. The schools will meet Saturday at H.A. Chapman Stadium in Tulsa, Oklahoma.

TheComeback.com Bowl is a celebration of the absurdity of the college postseason. Let’s face it. There are too many bowl games.

Are you excited about the Duke’s Mayo Bowl, the Famous Idaho Potato Bowl or the Gilroy Garlic Bowl? (OK, we sort of made that last one up. Imagine our surprise when we discovered that there is/was a Gilroy Garlic Bowl. It has nothing to do with football.)

* Vacated FBS spot to be filled by the 2021 FCS champion.

Here’s how we arrived at this year’s match-up:

This was an easy decision. (And sadly, it’s the second appearance for both programs in TheComeback.com Bowl.)

Four schools finished with 1-11 records: Arizona, Florida International, UMass and UConn. The teams with the nation’s worst average scoring margin were UMass (minus-28.3) and UConn (minus-27.1). These teams met during the regular season with UMass winning 27-13 at home, but the score was tied at 10 after three quarters. Now we can settle it on a neutral field. Who is the worst of the worst?

It wasn’t always this way. UMass football once mattered. When the Minutemen were a member of the FCS, they won a national championship in 1998. But the move up to the FBS has been disastrous. UMass is not even in a conference. Who would want them?

Believe it or not, there was some preseason optimism. After playing only four games (0-4) in 2020 due to the pandemic, UMass had several returning starters on defense and an influx of transfers on offense. The schedule wasn’t brutal with at least three winnable games.

What happened? UMass gave up more points than any team in the nation (517), including 50+ four times. In back-to-back games, the Minutemen were crushed 59-3 at Florida State and 62-17 at Liberty. They dropped consecutive home games to FCS opponents Rhode Island and Maine. Opponents rushed for an FBS-high 43 touchdowns and threw an FBS-low two interceptions. All of UMass’ losses were by at least 13 points.

This team was so bad that Walt Bell was fired as coach last month after the 35-22 Rhode Island loss dropped its record to 1-8. The new man in charge of this mess is a familiar name. Don Brown, the former Michigan and Arizona defensive coordinator, returns to the school that he coached from 2004 to 2008. Brown guided UMass to a 43-19 record, including an appearance in the 2006 FCS title game.

If Brown can’t save UMass, it should welcome relegation.

This isn’t the first time UConn has been mentioned as the worst team in college football. There was 2018 (1-11). And there was this putrid season.

At least UConn has its priorities straight. Most schools make conference changes based on football. The Huskies, a basketball-first institution, left the American Athletic Conference to return to Big East hoops in 2020. But because the Big East no longer has football, the Huskies have been playing pigskin as an independent.

Most Connecticuters are OK with this.

Yes, the Huskies were truly terrible in 2021. Yes, they suffered the embarrassment of losing to UMass. But they were also unlucky. Unlike the Minutemen, UConn was competitive at times. They lost consecutive two-point games. At home against Wyoming, they had a chance to tie the score with four seconds left but a pass on a two-point conversion attempt failed in a 24-22 loss. At Vanderbilt, the Huskies held a 28-27 lead but fell on a field goal as time expired.

UConn lived down to expectations. After canceling the 2020 season due to the coronavirus, the Huskies opened with a 45-0 defeat at Fresno State and averaged 15.6 points, second-lowest in the nation. They averaged just 265 total yards per game – third-worst. The lone victory came at home against FCS Yale, squeezing out a 21-15 triumph.

Curiously, coach Randy Edsall stepped down after the team started 0-2. His second stint at UConn (four losing seasons in four years) wasn’t nearly as successful as his first (five bowl appearances in seven seasons in the Big East).

In an interesting move, Jim Mora was hired to be the Huskies’ new coach. Mora has college (UCLA) and NFL (Atlanta Falcons) experience. He’s had some success. But this is unlike any challenge he has ever faced.

There you have it. UMass vs. UConn! Order your TheComeback.com Bowl tickets today. One lucky fan will get to dance in the end zone with the players on the game’s first touchdown. Assuming there is a TD scored in this game.