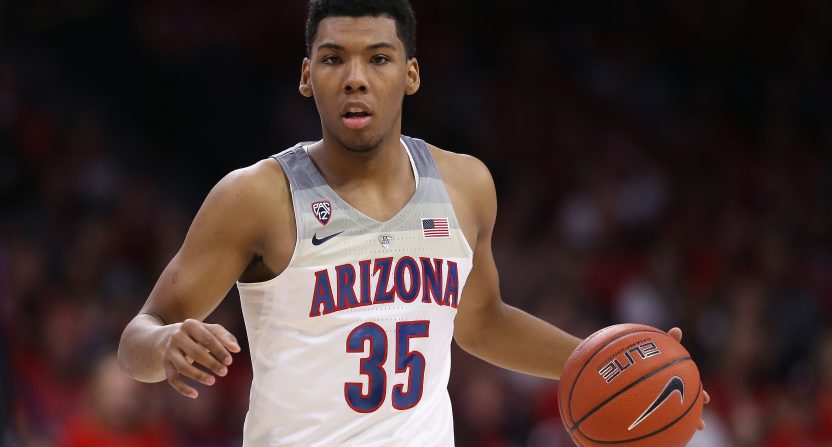 The 2016-17 season is in the books with North Carolina holding off Gonzaga in Monday night’s national championship game. So for those of you already suffering from CBSA syndrome — College Basketball Separation Anxiety — here’s an early look at the Top 25 for next season.

Of course, next fall’s rosters are not yet solidified. There will be transfers coming and going, guys going pro and spring recruiting commitments. For our purposes here, I’ve assumed anyone projected as a first-round pick in DraftExpress‘ most recent mock draft will choose to leave school and enter the NBA Draft.

The Wildcats were one of the best teams in the country once Allonzo Trier started playing. They lose a lottery pick in Markkanen and a veteran guard in Allen, but the incoming group will more than make up for that.

Two starters will leave, but the Zags could easily wind up back in the title game if All-American Nigel Williams-Goss and potential lottery pick Zach Collins return. With Mathews graduating, this could be a huge year for Josh Perkins and Silas Melson in the backcourt.

Hopefully, the last month put the last of the Gonzaga doubters to rest.

The Shockers return everyone who played significant minutes on last year’s team, which finished top 10 in Kenpom. Remember, this team — led by MVC Freshman of the Year Landry Shamet — nearly knocked off Kentucky in the second round of the NCAA Tournament.

It would honestly be surprising if the Shockers don’t go 18-0 in the Valley. They wouldn’t go undefeated if they move to the AAC, but they’d still be the league favorites there.

This is Oregon’s peak if Tyler Dorsey, Dillon Brooks and Jordan Bell all return next season. Although many people think they’ll bolt, none of them are projected first-round picks.

So if those top three guys actually return, the battle for the Pac-12 title will be one heck of a party next season. If all three leave, the Ducks may not even be in the Top 25 at all. That’s how good those guys are.

It will be the usual revolving door for Kentucky. Between De’Aaron Fox, Malik Monk and Bam Adebayo all expected to go pro and Derek Willis graduating, the Wildcats will return, at most, one starter: Isaiah Briscoe. It’s always possible he goes pro as well.

But they also have the nation’s best recruiting class comprising six of the nation’s top 35 recruits. So pick against Kentucky at your own peril.

The Jayhawks look like the Big 12 favorites once again. Player of the Year Frank Mason III is gone, and star freshman Josh Jackson should go pro. But they have another player of the year candidate in Devonte’ Graham leading a group of veteran players. This team may be a bit worse than this past year’s, but it’s another Final Four contender.

So much of Duke’s outlook hinges on the decisions of Kennard and Grayson Allen. The Blue Devils are without a doubt a preseason top three team if both return, but if both leave then Frank Jackson and a bunch of freshmen will make up the bulk Duke’s roster. High school All-Americans Wendell Carter and Gary Trent Jr. are terrific players, but they’ll be carrying a large load as freshmen if Kennard and Allen leave.

Allen is currently projected as a mid-second-round pick.

The defending champions lose a lot, but they return Final Four MOP Joel Berry II along with a handful of key bench players. The Tar Heels will need one of those guys — most likely shooting guard Kenny Williams or power forward Luke Maye — to step up big-time if they are going to return to the Final Four.

Louisville could make a case for No. 1 if Donovan Mitchell decides to return — he still has not signed an agent. Even without him, as long as Quentin Snider and Deng Adel come back, this is a top 10 team and potential ACC champion.

Even though the Cardinals got knocked out of the NCAA Tournament early by a hot Michigan team, they were one of the most under-appreciated teams in the nation last season.

Jay Wright will find a way to keep Villanova atop the Big East despite losing three starters. Jalen Brunson will be one of college basketball’s best point guards, and he’s got a strong group around him led by Donte DiVincenzo, Eric Paschall and Phil Booth.

Once again, depth will be among Villanova’s biggest issues.

The Gators should be a Top 25 team no matter what, but their No. 11 ranking here relies on Devin Robinson returning to school. Robinson (No. 34 DraftExpress) declared for the draft without an agent, and he is right on the cusp between the first and second rounds.

We already know Florida will have KeVaughn Allen and Chris Chiozza back. Adding Virginia Tech transfer Jalen Hudson should help offset the loss of Barry as a scoring guard.

Mick Cronin may have his best team at Cincinnati as long as Sacred Heart transfer Cane Broome, Jacob Evans and/or Justin Jenifer can replace Caupain’s production at the point.

We know the Bearcats have perimeter scorers and bruising big guys in Kyle Washington and Gary Clark. Point guard play will determine their ceiling.

This team was more than solid when Bennie Boatwright was healthy, and they proved that by winning a pair of NCAA Tournament games and then nearly knocking off Baylor to reach the Sweet 16.

The Mountaineers were a top 10 Kenpom team and could hit that benchmark once again next year. They say farewell to two key starters, but floor general Jevon Carter returns and that’s what’s most important.

With Esa Ahmed and Daxter Miles back, West Virginia’s backcourt won’t be as deep as Kansas’, but you could argue it will be the Big 12’s best at the top.

If Trevor Bluiett pulls out of the draft, then the Musketeers only major loss will be Edmond Sumner, who was out with an injury during the team’s Elite Eight run. That’s somewhat of a big if, though. Bluiett is not projected to get drafted by DraftExpress, but he made a big name for himself during the NCAA Tournament.

He and J.P. Macura would be among the best one-two punches in college basketball, and they’re already used to playing without Sumner.

Minnesota didn’t make any noise in March, but it was among the most improved teams in the nation. Now the Gophers return four starters and, crazily enough, I think they are clear Big Ten favorites if Purdue’s Caleb Swanigan and Michigan State’s Miles Bridges go pro.

Ed Cooley pulled off a magic trick this year, taking a team that lost to Boston College, DePaul and St. John’s to the NCAA Tournament. Who does that?!

The Friars started playing terrific basketball starting in late January all the way through a close loss to USC in the First Four. This projection assumes they return everyone. Leading scorer and rebounder Rodney Bullock has declared for the draft without an agent, but he’s not even in DraftExpress’ top 100 prospects. This team can be scary if he comes back.

The clock keeps ticking and Swanigan still hasn’t signed an agent, which means he can still back out of the NBA Draft. If he, Vincent Edwards and Isaac Haas all return, Purdue will have a national title contender and one of its best teams ever. Even if just Edwards and Haas come back – neither projects as a first round pick – the Boilermakers are a top 20 team.

It seems like every year the Fighting Irish lose key players, and every year they wind up back in the Top 25. The bottom line is Bonzie Colson should be the preseason ACC Player of the Year and Matt Farrell could be one of the league’s top point guards. That duo plus a handful of players who know their roles will make Notre Dame an easy preseason Top 25 once again.

Although Baylor was nothing more than average starting in February and now loses two of its best players, Drew will find a way to get next year’s team into the Top 25. For four straight seasons, the Bears have finished the season in the AP Top 25. Two of those times, they started unranked, as they may again next fall.

Two starters are graduating, but as long as Bruce Brown comes back, this should be a Top 25 team. A backcourt of Brown, Ja’Quan Newton and incoming freshman Lonnie Walker will be tough to handle.

Plus, haven’t we learned to never count Jim Larrañaga out by now?

What do we make of Michigan State? The Spartans return plenty of talent, but they were still pretty average last year, even once Bridges returned from injury. Speaking of Bridges, this team’s outlook hinges fairly heavily on his decision to go pro or return. With him, the Spartans’ ceiling lies in the top 10 and maybe even the top five. Without him, they should still be Top 25 with Nick Ward, Cassius Winston and the rest, but nothing extraordinary.

The Spartans also have Gavin Schilling returning from injury, and could still get Oregon transfer Ben Carter on the court if the NCAA gives him a sixth year.

Exit Lonzo, enter LiAngelo. UCLA will still be loaded with talent, although less so than this past year. The Bruins will still be fine at point guard between Aaron Holliday and incoming freshman Jaylen Hands. They also add one of the best small forward’s in the class in Kris Wilkes.

The downside for Steve Alford is this team likely won’t be good enough to compete with Arizona and Oregon, which means he will end year five at UCLA still without a Pac-12 regular season title.

Nevada needs Cameron Oliver to return to hold on to this spot. Oliver is currently testing the waters, but DraftExpress suggests he’s a second round pick, which could mean an eventual return to school.

Although the Wolf Pack lose leading scorer Marcus Marshall and shooting guard D.J. Fenner, they have a new batch of transfers coming in with Caleb and Cody Martin (NC State) and Kendall Stephens (Purdue).

Now is when the Avery Johnson era truly begins in Tuscaloosa. The Crimson Tide had a sneakily solid season, winning 19 games and making the NIT. Now they return six of their top seven scorers and add a top five recruiting class, led by five-star guard Collin Sexton.

It could be more than two-dog race for the SEC title next year.