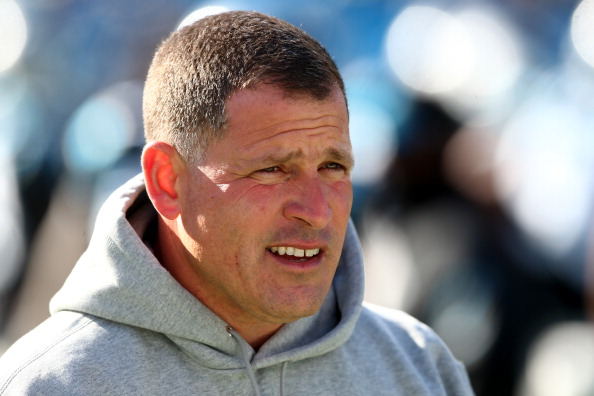 Nobody involved has looked good in the Greg Schiano to University of Tennessee saga. I know I’m not saying anything too controversial, but over the last 24 hours, Tennessee and Schiano agreed to a deal and then that deal was taken away when mass revolt started after the news was leaked.

But that was enough for Tennessee fans to use that as a reason to not hire Schiano as head coach. And while the simple connection of Schiano with Sandusky may be enough for fans to not want him at Tennessee, it gave Vols fans an easy out to not only keep away a coach they don’t want, but make it look like Tennessee is doing the right thing in keeping away someone connected to Jerry Sandusky.

But when does that go from doing the right thing to doing it because it’s convenient? There is a lot of self-righteousness in using the Jerry Sandusky connection to keep Greg Schiano from being head coach, but it’s easy to act high and mighty if you think the guy sucks as a head coach and don’t want him. I’m sure if it was Jon Gruden (who I am making clear wasn’t at all involved with Jerry Sandusky and Penn State) mentioned in McQueary’s testimony, a lot of Tennessee fans would find some way to twist it around. They could justify it so it doesn’t seem as bad as it actually is, and could feel comfortable going to sleep at night.

I can see the spin now. “Jon Gruden wasn’t investigated.” “Gruden was only named once in all this tesimony, he wasn’t the one on trial.” “It’s not fair to ruin Gruden’s life if he wasn’t the one molesting children.” I’m sure if Greg Schiano won a national championship or a Super Bowl in the NFL, he’d be Tennessee’s head coach right now. I have repeatedly seen in a majority of places that sports is more important than actually doing the right thing.

If people really didn’t want Schiano to be head coach, you could look at what his former players have said about the man and that alone should disqualify him. It seems like many of them hate his guts and have the view that Schiano has a Napoleonic complex which is filled with verbal abuse toward his players and cheap shots that even caused Peyton Manning to curse him out. Sometimes, a player needs to be yelled at for motivation or to think more clearly, but if yelling is all you do and you become a one-trick screaming pony, players eventually tune you out and that’s been seen time and time again.

And if matters can’t get any worse in this saga, Tennessee may have to buy Schiano out of the contract he just signed. All we know at this point is that Schiano is seeking a buyout and none of the numbers posted are reliable. And some of the numbers seen, like $25,000,000, are mind-boggling. Even a buyout of a few hundred grand seems excessive when the man just took the job minutes before.

This wouldn’t be that bad in the pros where it’s down to the team and the owner footing the bill. But in college, and at a public college like the University of Tennessee, we’re now talking about taxpayer money that could be used to undo this stupid decision. Hey politicians, this is when you can chime in. Your constituents may be getting screwed over and have to pay for this screwup. If you’re going to chime in on the initial move, don’t let up now that Tennessee isn’t going through with this.

Even though this will likely be paid by boosters, put the feet of the administrators to the fire for even getting themselves into a situation where they may have to burn millions of dollars of taxpayer money because they didn’t do their due diligence. And after all this money is being thrown around as if it’s no big deal, the “student athletes” still aren’t getting paid.

Maybe Greg Schiano and the University of Tennessee deserve each other. One is a coach who probably doesn’t deserve a coaching job anywhere for a variety of reasons. And one is a school which is too full of themselves with administrators, fans and politicians who are completely oblivious and think they can get Jon Gruden when they won’t and don’t even deserve any coach with a shred of talent.

It’s stories like this that make me disgusted I ever fell in love with sports to begin with. I’m not naive, I know sports isn’t always noble and positive and filled with people of good character. Sports is a microcosm of society and both are filled with many people who only do things that serve their own self-interests and the more money that’s involved, the more those self-interests rears its ugly head.

I love sports, both as a fan and as a professional, but in no way is it anywhere close to being perfect. A lot of people overvalue sports at the expense of so many serious and more important things. And in a story like this, where while people did the right thing, but did so on the basis of what they felt was for the best of the football program and not really about doing the “right thing,” that’s when I sometimes hate sports.

1 thought on “I love sports, but everything about the Greg Schiano situation is why I sometimes hate sports”