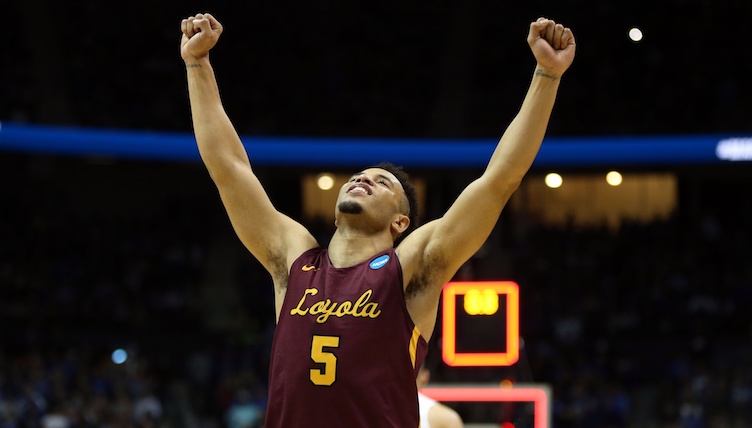 The 2018 NCAA Tournament was full of so many amazing moments and performances that it’s hard to remember every single one. There was 16-seed UMBC’s epic win over one-seed Virginia, FSU’s big win over one-seed Xavier, Nevada’s 22-point comeback against Cincinnati, Syracuse’s run from the First Four to the Sweet Sixteen, Texas A&M’s obliteration of North Carolina, Jordan Poole’s huge buzzer-beater, and finally Villanova’s dominant run to a second NCAA title in three years.

In the end, though, the 2018 tourney will probably best be remembered for the Loyola-Chicago Ramblers, who rambled all the way from an 11-seed to the Final Four thanks to a series of last-second heroics and huge performances. They transcended what was expected of them and become one of the few true mid-majors to make it to the Final Four in the last few decades.

Thank you for an historic season @RamblersMBB. You make us all proud to be #Ramblers! ? #OnwardLU ?? pic.twitter.com/Opylrii6Hq

With their magical run, Loyola provided a blueprint for other schools to follow and drew a line in the sand to all the other mid-majors out there with a double-digit seed and a dream: We did it, now it’s your turn.

So the question is, which mid-major school has the chance to be the Loyola-Chicago of the 2019 NCAA Tournament? Let’s look at the contenders.

The 2017-18 season was a historic one for the Grizz. Just one year removed from a 16-16 finish, Montana finished 26-8, won the Big Sky Conference regular-season and tournament titles, and played in their first NCAA Tournament since 2013. Their season ended in the first round when they ran into eventual national runner-up Michigan.

So knowing all of that, consider that Montana is only losing one player from this year’s squad (Fabijan Krslovic) and returns their top three scorers, all of whom will be seniors (Ahmaad Rorie, Michael Oguine, and Jamar Akoh). That trio combined for 45.8 points per game and should all improve even further. They’ll enter the season as clear favorites to repeat in the Big Sky, but after that, the sky’s the limit.

If there’s any school out there who’d love to replace Loyola-Chicago next season, it’d be the Redbirds of Illinois State. Their 18-15 campaign ended when they lost to the Ramblers in the MVC championship game.

What must give ISU hope is the news that Missouri Valley Conference Newcomer of the Year Milik Yarbrough announced he won’t put his name in the NBA Draft and will return for his senior season. After putting up 16.6 points, 6.6 rebounds, 4.8 assists per game, he’ll return with a chance to add to an already impressive resume. Along with Yarbrough, the Redbirds also return Phil Fayne (15.6 ppg) and Keyshawn Evans (15.2 ppg), and William Tinsley (35 blocks) for what could be a very dangerous mid-major come tournament time, assuming they get past the Ramblers.

For what it’s worth, they’re actually getting the same championship odds as Loyola for next season as of right now.

In the span of one season, Loyola-Chicago went from 18–14 to the Final Four. Keep that in mind when you consider a team making the jump from a CIT bid to the NCAA Tournament. While all eyes were on the Ramblers, Northern Colorado was busy winning the 2018 CollegeInsider.com Tournament. It was a huge turnaround for the Bears, who went 11-18 last season and finished the 2017-2018 campaign with a 26-12 record.

They’ll lose senior Andre Spight, who not only led the team in scoring but also set the school’s single-season scoring record. Still, they should get plenty of production from Jordan Davis and Jalen Sanders.  It might be between them and Montana for the Big Sky crown and then… who knows.

SDSU is coming off a very similar regular season as Loyola-Chicago. They finished the season 28-7, won the Summit League, and earned a bid into the NCAA Tournament. As a 12-seed, they might have been a trendy pick except that 12-seeds seem to have been replaced by 13-seeds as the upset special. The Jackrabbits lost in the first round to Ohio State.

The big question for next season is whether or not Mike Daum returns for his senior season. He averaged 23.9 points per game and 10.3 rebounds per game for an absolutely dominating season. If he returns, he’ll anchor a lineup that also includes scorer David Jenkins Jr. and rising guards Tevin King and Skyler Flatten. They’ll be the favorite to repeat as Summit champs and perhaps get over the hump in the NCAA Tournament.

The world of Upstate New York basketball revolves around Syracuse, but don’t discount the growth of Buffalo’s program in recent seasons. While the Orange scrambled to make the tourney, the Bulls dominated the MAC, going 27-9 and winning both the regular season and conference tournament crowns.

They then announced themselves to the nation by upsetting trendy pick Arizona in the first round before losing to Kentucky in the second. Assuming All-MAC players Nick Perkins and CJ Massinburg both return, the Bulls should be in prime position to keep this momentum going.

Another mid-major which had a great regular season (27-8), won their conference season and tournament titles and entered the NCAA Tournament with a chance. UNC Greensboro came close, but ultimately fell short in their first-round upset bid against Gonzaga.

Still, the pieces are all there for the Spartans to try again next year. Coach Wes Miler has turned UNCG into the class of the Southern Conference (good thing they extended him) and he returns three starters next season where they should be among the favorites to go back to the tourney. Leading scorer Francis Alonso is among the returnees and should be the centerpiece of another strong Spartan squad.

Congratulations to D'Marcus Simonds @TwoSpicee on being named AP All-America Honorable Mention on Wednesday. Becomes the fourth Panther to earn the honor.https://t.co/4dThx4IOU8 pic.twitter.com/RqZMrSUwm4

The Panthers had a shot to upset two-seed Cincinnati in the first round of the NCAAs, but it didn’t quite come together. Still, GSU put together a solid season with a 24-11 record and won the Sun Belt conference tournament. The key to GSU’s future success could be in the hands of guard D’Marcus Simonds. The sophomore earned an AP All-America Honorable Mention and is already No. 15 on the school’s career scoring list. After averaging 21.2 points per game, it’s logical that he’ll put his name in the hat for the NBA Draft.

But on the off chance that he doesn’t, look out Sun Belt (and everyone else). The Panthers will return a trio of rising seniors in Jeff Thomas, Malik Benlevi, and Devin Mitchell as well, so either way, they should be a solid team next season.

How could we make a list of who the next Loyola-Chicago could be without mentioning Loyola-Chicago? Rising seniors Clayton Custer and Marques Townes will be back and assuming players like Cameron Krutwig can make the leap to the next level, we could be in for a repeat performance in the regular season.

Who knows, the Ramblers might even get enough national attention this time around for an at-large bid even if they don’t win the MVC tournament. Perhaps most importantly, they know how to win in the NCAA Tournament now and no one is going to want to face them (or Sister Jean) if they make it back.