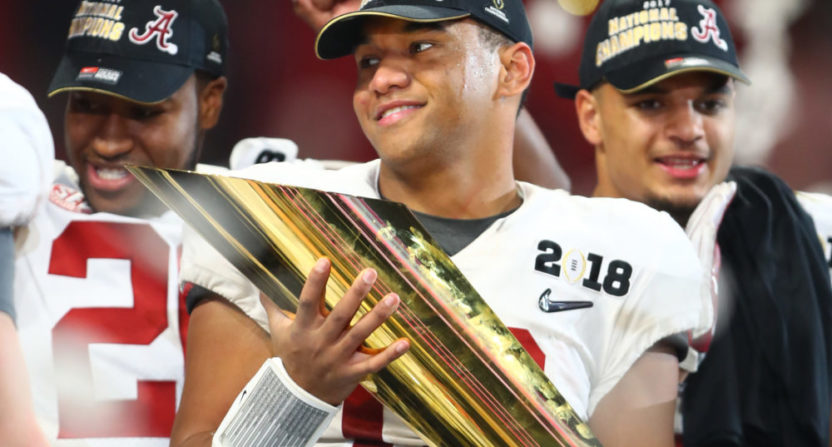 Down 13-0 at halftime against Georgia during Monday’s national championship game, Alabama coach Nick Saban pulled quarterback Jalen Hurts and inserted freshman Tua Tagovailoa in hopes of lighting a spark for the Crimson Tide offense. Obviously, that move worked out for Alabama, who rallied in the fourth quarter to force overtime and then win the national championship on a stellar throw by Tagovailoa in overtime.

Days later, people are still in awe of Saban’s ability to make that call. Nebraska head coach Scott Frost, while making a stop to collect his latest coach of the year award for his 2017 season at UCF, admitted he may not have been able to stomach making a similar decision. Yet he seemed a tad surprised it took so long or Saban to make the switch.

“It was a decision I don’t know I would have been courageous enough to make. That’s the answer you want to hear,” Frost said while in Houston for the awarding of the Paul “Bear” Bryant Award, according to Sam Khan Jr. of ESPN.com. “The other answer is that [Tagovailoa] was pretty obviously better and they had 12 games to figure that out and didn’t. Coach Saban is above criticism with everything he’s accomplished, so I don’t mean it that way, but I recruited Tua out of high school and knew what he could do and it doesn’t surprise me that he did what he did. Jalen’s a great player, too. That was a very bold and courageous move and I’m surprised it didn’t happen earlier [in the season].”

Jalen Hurts helped get Alabama to two straight national championship games, with just two losses during those two seasons (one of those losses being to Clemson in last season’s national championship game). Despite the record and TD-interception ratio, Hurts was lacking the arm talent necessary to make the kinds of playsTagovailoa showed the potential to make in practices, and Tagovailoa came to Alabama already drawing comparisons to another Hawaiian legend, former Oregon quarterback and Heisman Trophy winner Marcus Mariota.

Since Frost helped in the recruiting efforts at Oregon to scout and eventually offer Tagovailoa a scholarship, he had an idea of what he was capable of doing. Frost’s comments will be perceived as shots fired at Saban, and that may be fair to suggest even though he tried to cool that hot take off a bit by acknowledging Saban is “above criticism with everything he’s accomplished.”

One just has to wonder why it took so long for Oregon to offer a scholarship to a player that reportedly was waiting and waiting for Oregon to make an offer so he could follow in the footsteps of Mariota in Eugene. Oregon’s loss was Alabama’s gain, but a lot of schools can sympathize with that unfortunate reality these days.