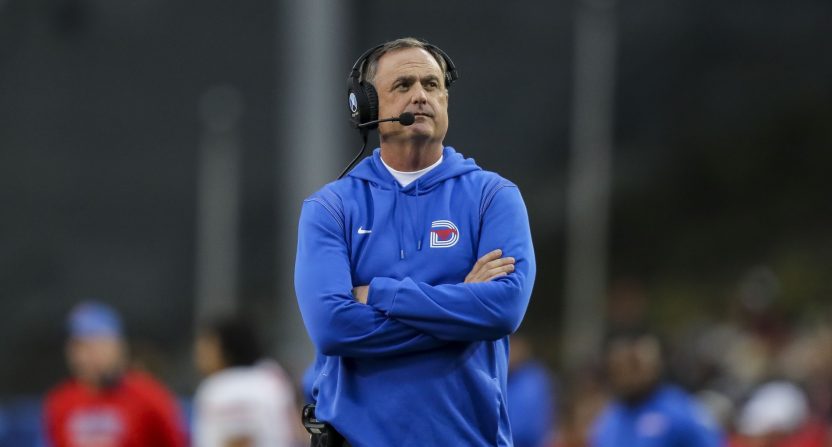 It’s already been a wild ride on the college football coaching carousel and we’re not even out of November yet.

We’re in the midst of a season in which USC fired Clay Helton a couple of games in, LSU came to terms with Ed Orgeron on a separation agreement soon after, and Florida fired Dan Mullen with a few weeks to go. And there are plenty of other coaches who got fired mid-season as well, opening doors for the dominoes to start falling across the sport.

The major dominoes started to fall this weekend when Florida hired Louisiana’s Billy Napier and then Lincoln Riley shook up the college football landscape, leaving the Oklahoma Sooners for the USC Trojans.

Monday added a little more strangeness to the ever-strange cycle that plays out each year. This weekend, it was reported that SMU Mustangs coach Sonny Dykes was moving 40 miles away to take over as the new head coach of the TCU Horned Frogs after the school agreed to part ways with longtime coach Gary Patterson. The reports also added that current Miami offensive coordinator and former SMU offensive coordinator Rhett Lashlee was set to replace Dykes in his former role as SMU.

Source: Rhett Lashlee to #SMU is a done deal. The Miami offensive coordinator will be the next Mustangs coach, replacing Sonny Dykes, who heads to TCU.

That’s all well and good, but because college football is college football, things got a little weird on Monday when SMU announced Lashlee’s hiring before TCU had officially announced Dykes’ hiring. So if you weren’t paying attention, you might be a bit confused as to why SMU was introducing a new head coach when, technically, it hadn’t lost its old one yet.

SMU will announce its replacement for Sonny Dykes before TCU announces it has hired Sonny Dykes.

So SMU did indeed announce its new head coach before Sonny Dykes officially left. What a sport.

Of note: not one mention of Sonny Dykes, who hasn’t been announced as the next head coach at TCU (yet).

SMU will hold a press conference for Lashlee at 4 pm tomorrow.

You could certainly read between the lines and say that SMU isn’t thrilled that Dykes is leaving for their nearby rival, especially at a time when conference realignment is always lurking to make life harder for them.

Meanwhile, TCU has finally announced that they’ll introduce Dykes as their head coach on Tuesday.

TCU announces it will hold a news conference Tuesday for a “major announcement” (i.e. hiring of Sonny Dykes)

For what it’s worth, SMU and TCU will meet next season in Dallas, which means Sonny is in for one heck of a welcome back. Expect that game to have a little extra juice for Mustang fans.