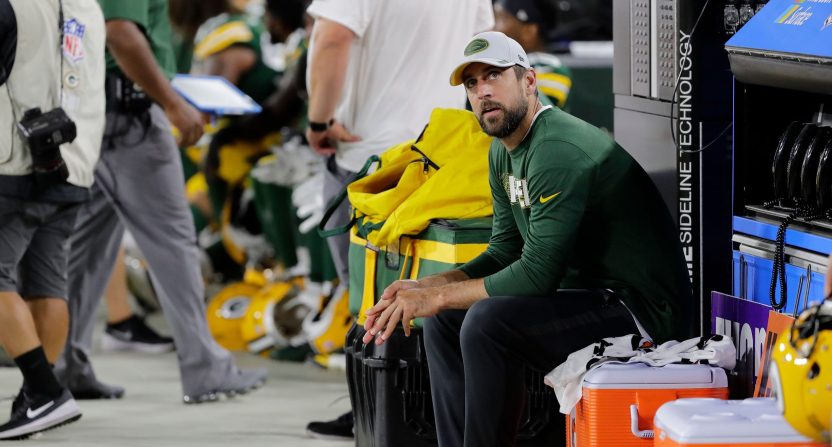 Green Bay Packers quarterback Aaron Rodgers made a lot of news in the last year ever since he randomly announced that he and actress Shailene Woodley during his MVP acceptance speech. The public perception of Rodgers has shifted so significantly on him since then, the news that the couple has broken up is not exactly being greeted with a lot of compassion.

After an offseason of drama that many used to paint Rodgers as a prima donna, he returned to the Packers and silenced critics with solid performances. But then when it was revealed that he had misled people about his vaccination status, it opened the floodgates, introducing the world to free-thinker Aaron Rodgers who was on a one-man mission to push back against the “woke mob” and “cancel culture.” When the Packers lost in the playoffs, plenty of NFL fans gleefully enjoyed seeing Rodgers fall short once again when it mattered. And now, it seems, they’re not exactly broken up about the break-up.

As news spread on social media about the end of the very curious, much-discussed relationship, the football world was ready with some very spicy takes on Rodgers. Perhaps the most common one revolved around the fact that the one-time Super Bowl winner once again fell short in his quest to win another ring…

typical Aaron Rodgers coming up short just when he’s just about to get a ring https://t.co/c9uD0JHjK4

I'm really proud of Shailene Woodley for doing her own research. https://t.co/1IBo1iA7QH

Aaron Rodgers’ chance to get another ring is gone https://t.co/UMLXzROUtw

Missing out on two rings in the same season. That’s wild. https://t.co/ffp43k9BgM

Meanwhile, plenty of people referenced “Woodley Mode,” from the infamous sketch by the SNL comedy trio Please Don’t Destroy that posited the notion of a Shailene Woodley video game in which you could customize the outfit of boyfriend Aaron Rodgers.

At one point in the sketch, the player goes “Woodley Mode” which appears to be a good thing but turns out to be more confusing than expected, a perfect metaphor for the larger discussion around the couple.

"He was unable to really 'go Woodley Mode' like that," a source exclusively tells In Touch.https://t.co/TjNWMYkkNj

Good luck to Aaron and Shailene as they prepare to do their own research on the next steps of their lives.