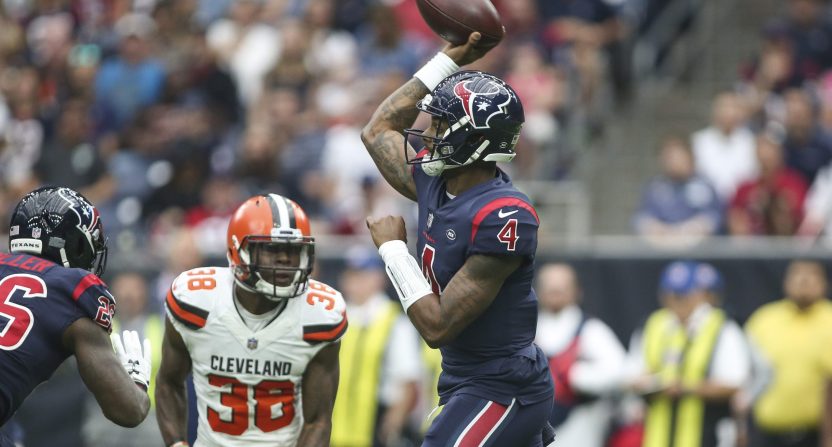 Since it became public that the Cleveland Browns were not only trading three first round picks (and more) for, but also paying $230 million guaranteed to, Deshaun Watson, many have spoken out about the apparent insensitivity displayed by the Browns to go “all in” on a quarterback who is currently being sued in a civil lawsuit by 22 women accusing him of sexual assault and harassment.

After two days since the news broke, the Browns revealed they had traded for Watson and included three separate statements on the trade. One by owners Dee and Jimmy Haslam, one by GM Andrew Berry, and one by head coach Kevin Stefanski.

All three read in a similar way as words like “comprehensive” and “extensive” were used to describe the research that was taken by the team to determine if they should trade for Watson. It was mentioned that the Browns met with Watson to discuss the situation at hand.

There was nothing in any of those statements about whether or not the Browns met with any of the 22 women or their attorney or even that they met with the NFL to discuss the NFL’s ongoing investigation. According to John Barr at ESPN, attorney Tony Buzbee revealed to Barr that “no NFL teams have reached out to him or his clients” in regards to any investigation or research to determine whether or not to trade for Watson.

“The Browns organization did not reach out to me. I didn’t expect them to do so, and can understand why they didn’t. But, knowing what I know, they probably should have,” Buzbee said.

If this is true, then this wasn’t exactly a “comprehensive evaluation process.” I’m being hyperbolic here but I imagine the extent of the Browns’ investigation was asking Watson, “Did you do it?” Watson responded, “No.” And then the Browns saying, “That’s good enough for us.”

This feels like it happens a lot. Why does Art Briles get hired despite that team being well aware that there will be a backlash? Because when organizations (in a variety of fields) find someone they want to hire, they’re not going out of their way looking for reasons to not hire that person. Even when those reasons are widely known either by Googling the person’s name or their name is in the headlines. In Watson’s case, regardless if the Browns believe he did it or not, them paying Watson $230 million was a statement that the juice is worth the squeeze no matter what happens next.

If there is a silver lining to all this, it’s that the trade has resulted in over a thousand donations to Cleveland’s Rape Crisis Center (which you can donate here). It might be for rather unfortunate reasons but it’s a way for people to channel their disappointment and rage into something that’s going to help many people.