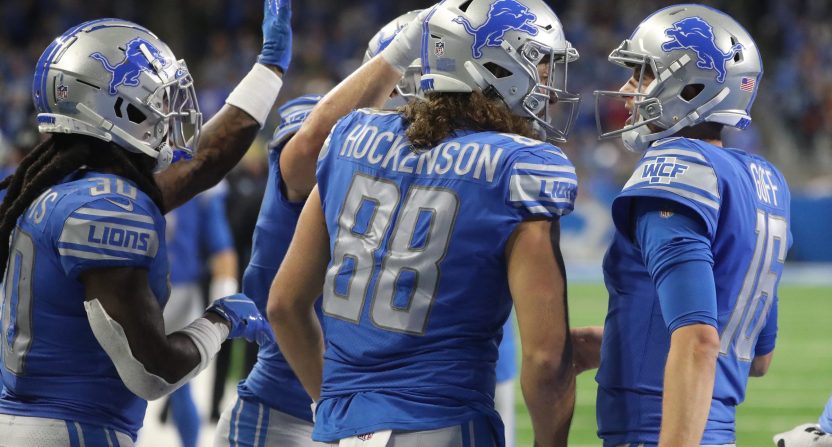 The Detroit Lions are like a terrible movie franchise that keeps getting greenlit for sequels. From the studio that brought you the 2008 Lions, we present the 2021 Lions.

Starring Dan Campbell as the tough-talking coach with a career record of 5-17-1. Also starring Jared Goff as the handsome quarterback who hasn’t won a game (0-16-1) without Sean McVay whispering into his helmet. And starring the Ford Family who must have had the curse of Wayne Fontes placed upon them because this team has been so inept that two Hall of Famers (Barry Sanders and Calvin Johnson) opted to retire early rather than play another down for them.

WE HAVE A TIE!

Still, these Lions have an excellent shot of finishing without a victory. Their remaining schedule is the seventh-toughest in the league.

Detroit’s final six games are home vs. the Minnesota Vikings (5-6), at the Denver Broncos (6-5), home vs. the Arizona Cardinals (9-2), at the Atlanta Falcons (5-6), at the Seattle Seahawks (3-8) and home vs. the Green Bay Packers (9-3). All those teams have more talent and all but Seattle will be jockeying for playoff spots.

The best hope for a victory might be the finale. The game could be meaningless for Green Bay if they already locked up playoff seeding. The Packers might be inclined to rest their starters. Good news for the Lions! Unless Jordan Love turns into Matt Flynn.

The funny thing is that one could argue that the Lions are NOT the worst team in the league. They’ve lost five games by one score. Three (3!) defeats came on game-ending field goals, including the longest kick in NFL history.

Detroit should have beaten the Baltimore Ravens (8-3), who are currently the top seed in the AFC playoff picture. Point differential is the best indicator of how good or how bad a team is. Detroit’s average scoring margin is -10.5. In comparison, the Houston Texans (2-9) are -11.6 and the New York Jets (3-8) are -12.3. Those train wrecks are worse. And yet, Detroit is winless.

“Look, as far as being warranted, when you don’t win a game, I should be getting criticized,” Campbell told the Detroit News. “I don’t blame anybody for that. That’s the reality of it right now. I would love to be able to say that there’s something I can tell everybody that’s going to make everybody feel better, but as you guys know, it’s about winning. We haven’t done that yet.”

The Lions weren’t supposed to be this bad. Before the season started, their over/under win total was 5. Campbell was hired in January after being on a successful New Orleans Saints staff. Plus, he had previous head coaching experience, serving on an interim basis at the Miami Dolphins in 2015 after Joe Philbin was fired mid-season.

Bizarre turnover for the Lions

Detroit brought in a new quarterback in an unprecedented swap of former No. 1 overall draft picks, sending Matthew Stafford to the Rams for Goff. Say what you want about Goff, but he has won more playoff games (two) than Stafford (zero) and has been to a Super Bowl.

This was a franchise looking for a fresh start. Instead, it has the same moldy smell. The Lions can’t score (15.8 points per game, third fewest in the league) and can’t slow anybody on the ground (133.9 rushing yards allowed per game, fourth most).

Even though things look bleak, there have been some bright spots.

Will they finally get a victory? ESPN predicts that the Lions will win at least one game and have a 77.9 percent chance of securing the top overall pick for the 2022 draft.

Unfortunately for Detroit, there is no grand prize at the end of this misery. It’s not like last year when fans of the Jacksonville Jaguars and Jets were rooting for losses so they could take Trevor Lawrence.

"I know the core of this team." – Coach Campbell pic.twitter.com/zcRW6tIbPl

The 2022 Draft is shaping up to be one of the weakest for quarterbacks. There’s a chance no QB will be taken in the top 10. Detroit does own the L.A. Rams’ pick, which will be a late first-rounder. They could take a flyer on someone like Nevada’s Carson Strong or North Carolina’s Sam Howell.

But as far as this season is concerned, Detroit is desperate to avoid becoming the only NFL franchise with two winless seasons.

“We’ve got six to go and we’re playing spoiler now,” Campbell told the Detroit Free Press. “We’re trying to ruin people’s day is what we’re trying to do.”