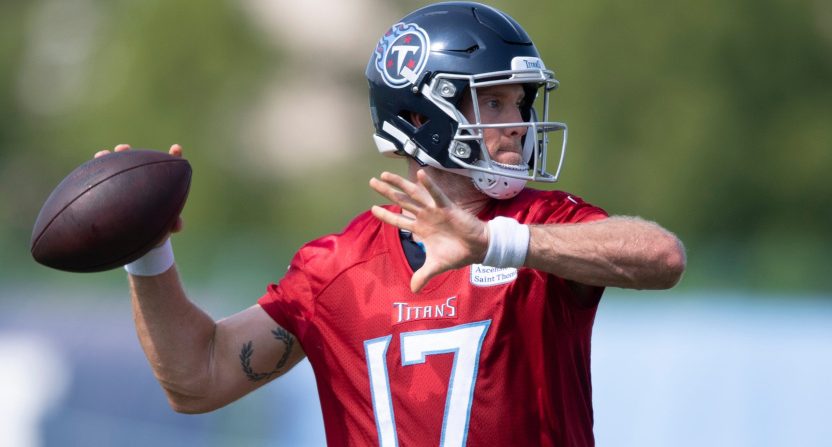 The COVID-19 pandemic led to an awful lot of sports cancellations and postponements last year and early this year, but with the increased availability and uptake of vaccines, that had seemed to be less of a threat for ongoing and upcoming seasons. The spread of the more-infectious and more-transmissible Delta variant, combined with decisions by many not to get vaccinated, has made that more of a question, though. Last month saw some notable MLB postponements, and this week’s already seen a CFL game postponed thanks to COVID spreading through the Edmonton Elks (that’s now up to 14 positive tests), and questions about what’s ahead for the NFL following the news that nine members of the Tennessee Titans (seven players, including quarterback Ryan Tannehill, plus head coach Mike Vrabel and special teams coach Craig Aukerman) have now tested positive for COVID. Here’s more on the Titans’ story from Turron Davenport of ESPN:

The Titans previously announced that seven players, including Tannehill, had been placed on the reserve/COVID-19 list this week and that coach Mike Vrabel tested positive for the coronavirus Sunday.

Tannehill, who is vaccinated, will miss five to 10 days depending on how quickly he can produce two negative tests over a 48-hour period. The Titans host the Arizona Cardinals in Week 1 on Sept. 12.

Here’s the latest on the Elks from 3 Down Nation:

A total of 14 Edmonton Elks players have now tested positive for COVID-19, according to a new report from 630 CHED’s Dave Campbell.

The information was shared today in a virtual meeting held internally.

The team’s Tier One staff, including all players and coaches, are isolating at home while testing continues to be conducted daily.

Edmonton will not be identifying the players who tests positive for the virus unless they remain in COVID protocols when the team resumes on-field activities.

The Elks had five members of the team test positive for the virus on Sunday, which resulted in the postponement of Thursday’s game against the Toronto Argonauts. Four more players tested positive on Monday, when it was revealed that the Elks are the third-lowest vaccinated team in the league.

At the moment, the Elks’ situation is the only one that’s led to a postponement, but that alone is going to create some issues for the CFL. There isn’t an easy time to make it up, and certain possibilities (moving it to Edmonton or playing it amidst a slew of other Argonauts’ games in September) seem unfair to the team that didn’t have the COVID issue. And the league could declare a 1-0 forfeit, but that would mean the Elks’ players wouldn’t get paid, which would certainly lead to some pushback. Another big question is if this is going to be the only CFL postponement, or if other games will go down as the season goes along.

As for the NFL, the current level of the Titans’ outbreak hasn’t led to even their preseason game being postponed or canceled at this point. And with this week’s game being a preseason one, it seems likely they may be able to have many of the affected people here back by Week 1 (barring setbacks or further outbreaks). But these numbers of positive tests are still definitely concerning for the NFL, and they raise questions about how smoothly this season will go.

And that’s a wider football question for the CFL, NFL, NCAA, U SPORTS, and other levels looking to play this fall. Are there going to be outbreaks at levels requiring postponement or cancelation, and what are the leagues going to do in that case? We’re already seeing cancelations and postponements in other sports, including NCAA volleyball, but football is perhaps the toughest sport to reschedule games in given its short season and the physical demands of each game (which requires significant time off between games). That creates plenty of rescheduling challenges, as we saw in the last NCAA and NFL seasons. In the NCAA this year, many conferences have adopted wording requiring forfeits if one school can’t play. We’ll see if that’s ever used, and we’ll see how all these leagues deal with COVID this fall.

[ESPN, 3 Down Nation, The Toronto Sun; photo of Tannehill from Aug. 10, from George Walker IV/The Tennessean via USA Today Sports]