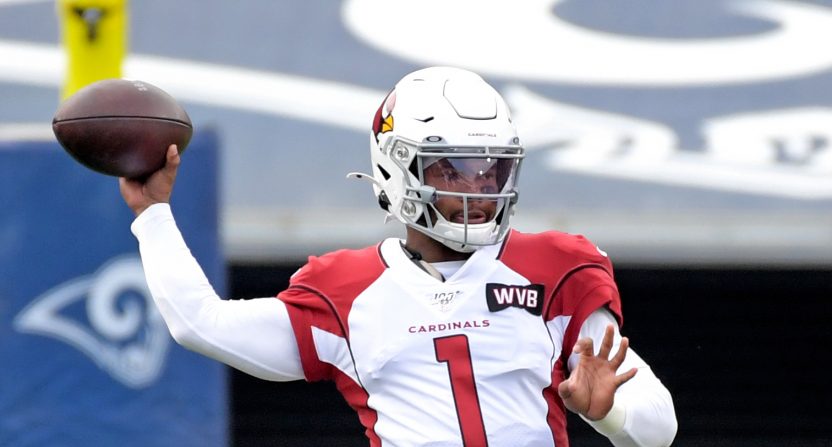 With the heart of NFL free agency in the books and the sports world otherwise quiet, we can at least reconsider the NFL’s new pecking order following a flurry of movement. Here’s how we rank all 32 teams entering draft season:

32. Cincinnati Bengals: Joe Burrow could change things, but that’s a long way away. And nothing they did in free agency helped.

31. Jacksonville Jaguars: They’ve been gutted. They went all-in a couple years ago and it backfired. Now, a rebuild is on the horizon.

30. Washington Redskins: Trent Williams is still on the roster, and he’s still losing value. There are questions about how much rope they’re giving Dwayne Haskins. It’s still a mess in D.C.

29. New York Giants: They’ll regret signing Blake Martinez and James Bradberry instead of swinging for the fences with Jadeveon Clowney.

28. Carolina Panthers: Teddy Bridgewater and Robby Anderson could give the offense a jolt, but they will really miss Luke Kuechly. This will be a transitional season.

27. Chicago Bears: Mitch Trubisky isn’t the answer, but neither is Nick Foles. And they made some curious moves in free agency. Robert Quinn and Jimmy Graham? And you let Nick Kwiatkoski walk?

26. Los Angeles Rams: The cap-strapped Rams are a shell of their former selves on defense, they aren’t any better without Todd Gurley, and it’s hard to be confident in Jared Goff with less support than ever.

25. Las Vegas Raiders: They were a bottom-10 team on both offense and defense last year. They’re better now, but not significantly.

24. New York Jets: The offensive line remains a problem, they lost Robby Anderson, and the high-priced defense doesn’t have the benefit of the doubt.

23. Denver Broncos: They have the talent to be decent, but Drew Lock remains a huge question mark.

22. Detroit Lions: As always, they’re too dependent on Matthew Stafford. If he doesn’t have a career year in 2020, this could seriously be a bottom-five team.

21. Los Angeles Chargers: They have more talent than this, but do you trust them? They’ll move up if they land Cam Newton.

20. New England Patriots: Ditto for them, because Newton could actually be an upgrade over Tom Brady. But they also suffered significant losses on defense.

18. Tennessee Titans: I have a feeling Ryan Tannehill and Derrick Henry will both come back to earth in 2020. Tennessee put all of its eggs in those baskets.

17. Minnesota Vikings: This offseason could’ve been a lot worse considering their cap crunch, but a good-not-great team has lost a lot of talent.

16. Dallas Cowboys: The Cowboys are talented but extremely top-heavy, and they will really miss Travis Frederick.

15. Green Bay Packers: We really can’t get away with saying “You never know with Aaron Rodgers” anymore. This is a good team on paper, but Rodgers has become a liability.

14. Miami Dolphins: They miraculously finished last year 5-9, and now they’re a heck of a lot better on both sides of the ball. Just wait until after the draft.

13. Seattle Seahawks: Seattle didn’t do enough this month, but Russell Wilson is still Russell Wilson, and he has some serious weapons.

12. Cleveland Browns: It’s hard to trust the Browns after their failed 2019 campaign, but they’ve done everything right this offseason.

11. Pittsburgh Steelers: If Ben Roethlisberger has anything left, a team with that much talent on defense has a shot. But that’s a big if.

10. Indianapolis Colts: Philip Rivers doesn’t have a lot left, but he’s more capable than Jacoby Brissett and the Colts are damn talented everywhere else.

9. Tampa Bay Buccaneers: Tom Brady might not save the Bucs, but he’s an upgrade over the turnover-plagued Jameis Winston. The Bucs have a lot of talent on both sides of the ball and one of the best coaches in the game.

8. Buffalo Bills: Stefon Diggs could put the offense over the top if Josh Allen breaks out in Year 3. They’re the favorites in the AFC East.

7. Philadelphia Eagles: You have to think they might finally be able to stay healthy this year, right? If so, they’ll be Super Bowl contenders with all of that talent on offense and defense.

6. Atlanta Falcons: Matt Ryan can ball with those weapons, they should be a little better on defense, and they went 6-2 after their Week 9 bye last season.

5. Arizona Cardinals: Kyler Murray and Kliff Kingsbury should be set to take off in Year 2 together, especially with Hopkins at their disposal. That defense is also better than broad 2019 numbers would lead you to believe.

4. San Francisco 49ers: This offseason has been a bit of a dud, but their dominance down the stretch last year still gets them a top-five spot.

3. New Orleans Saints: We’ll see how much gas is left in the tank for Drew Brees, but he might have one last run left with a team that is loaded on both sides of the ball.

2. Baltimore Ravens: The league’s only 14-win team from last season actually got better up front on defense. They’re right there with Kansas City.

1. Kansas City Chiefs: It’s good to be quiet this time of year.