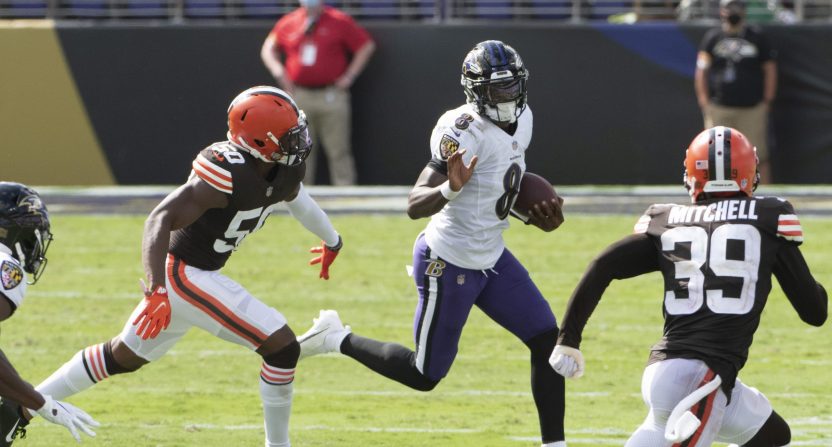 The 2020 wretched NFC East showed how important divisions can be in the NFL. The 7-9 Washington Football Team had no business being in the playoffs, but made it anyway thanks to divisional luck (plus some Week 17 shenanigans) and gave the eventual champions a brief scare in the Wild-Card round.

Conversely, the margin of error for the non-Kansas City occupants of the AFC West is much lower considering the likelihood that Patrick Mahomes and co. will lap the field.

Let’s take a look at how the divisions stack up ahead of the 2021 NFL season:

There’s a new division at the bottom this year. The AFC South is looking weak despite producing two 11-win teams last season. The Tennessee Titans are a top candidate to decline after a couple of contending seasons, with the defense unlikely to improve on a disappointing 2020. The offense relies heavily on Derrick Henry, whose workload has been massive over the past few seasons, and there’s no proven backup. The receiver combo of AJ Brown and Julio Jones certainly has high potential, but injuries could prove an issue there as well.

The Indianapolis Colts may enter the season with Jacob Eason at quarterback as Carson Wentz recovers from foot surgery (and Wentz’s recent track record isn’t great anyway). The Jacksonville Jaguars promise to be better than 1-15, but they lost running back Travis Etienne for the season and will be trusting Urban Meyer to lead a one-season turnaround with a rookie — albeit highly talented — quarterback in Trevor Lawrence. The Houston Texans are a complete disaster.

This division figures to improve after a historically awful season in 2020. The Dallas Cowboys have Dak Prescott and their offensive line back. The Washington Football Team could make themselves into contenders with an elite defense and a little bit of Fitzmagic. The Philadelphia Eagles are going to see what they have in Jalen Hurts. The New York Giants, well, figure to be below .500 again.

Still, the Cowboys are running back a mediocre defense, and Ezekiel Elliott spent last season fumbling the ball. Washington is starting a 38-year-old quarterback who’s never played in the playoffs.

It wasn’t long ago that this division was one of the league’s very best. It still boasts arguably the league’s best team in the Tampa Bay Buccaneers. As you might have heard, the Bucs brought back essentially their entire Super Bowl-winning team and have few discernible weaknesses.

The same can’t be said for the rest of the division. Jameis Winston’s New Orleans Saints have thinned out as a result of cap issues and now lack depth. The Atlanta Falcons will struggle defensively again, and the Carolina Panthers are hoping that Sam Darnold will improve on his status as one of the worst starting quarterbacks in the league.

The Buffalo Bills enter the year as the obvious favorite out of this division. With one of the best quarterbacks in the game in Josh Allen and a nice collection of weapons around him, the Bills enter the year as one of the favorites to reach the AFC Championship game. The Miami Dolphins and New England Patriots could be in the Wild-Card hunt (perhaps even the division hunt for Miami if they actually trade for Deshaun Watson); young Alabama products (Tua Tagovailoa and Mac Jones) will be the deciding factors.

Three teams in this division appear to have legitimate playoff aspirations. The Green Bay Packers remain at the top, with an MVP-level Aaron Rodgers and a roster that made the NFC Championship last year. They aren’t likely to be troubled too much by the Minnesota Vikings or Chicago Bears, but both teams could plausibly win enough to find themselves in the playoff race, especially if Justin Fields emerges at some point.

The Vikings have a nice cast of offensive weapons and have usually put out a good defense under Mike Zimmer. The Detroit Lions are more likely to finish with a top-five draft pick.

Ranking the AFC West this high might be a tad optimistic, but all four of these teams enter the season trying to make the playoffs. The Kansas City Chiefs, obviously, are Super Bowl contenders, and will win this division as long as Patrick Mahomes stays healthy.

The hype is real for Justin Herbert’s second season. The Los Angeles Chargers have Austin Ekeler and Keenan Allen around their star quarterback, and if the defense stays healthy, they could be a pretty solid team (of course, we say the same thing about the Chargers every season.) The Denver Broncos have a great defense and quality weapons around new starter Teddy Bridgewater, who beat out Drew Lock for the starting quarterback job. They’re a classic high-floor, low-ceiling team.

The Las Vegas Raiders’ defense projects to be low-caliber, though the offense has the potential to get a bit better if wide receiver Henry Ruggs takes a second-year leap.

The race to win this division will likely be tight. The Los Angeles Rams will be favored to come out on top, with one of the league’s best defenses and a ready-made quarterback upgrade in Matthew Stafford. On paper, the Rams look like one of the best teams in the league. Right behind them are the Arizona Cardinals, who were favored by many to have a breakout year last year. They upgraded their defense with J.J. Watt and first-round pick Zaven Collins.

As long as Russell Wilson is around, the Seattle Seahawks will be right in the mix. They manage to get by on defense every year, and Wilson will have DK Metcalf and Tyler Lockett to sling the ball to. The San Francisco 49ers could feasibly overtake all of these teams if they stay healthy. They were riddled with injuries last year and still finished an unlucky 6-10. Trey Lance, waiting behind Jimmy Garoppolo Kaepernick-style, gives this team a high ceiling.

This division has often been one of the league’s best, and that won’t change this season. Three teams won 11 or more games from the AFC North last year. The Cleveland Browns look the best on paper, with a top-tier defense, one of the best offensive lines in the league, and star-studded offensive weaponry. Both the Baltimore Ravens and Pittsburgh Steelers enter the year with even better defenses than the Browns.

Questions surround the Ravens’ crew of wideouts around Lamar Jackson, which has limited their offense over the past couple of years, and Baltimore lost starting running back J.K. Dobbins for the season due to a torn ACL. In addition, the Steelers will hope that Ben Roethlisberger has a little bit left in the tank, and that a young, makeshift offensive line will outperform expectations. Still, both teams have high hopes, for good reason.

The Cincinnati Bengals linger at the bottom, but could improve on their 4-12 record if former LSU dynamic duo Joe Burrow and JaMarr Chase fulfill their potential.