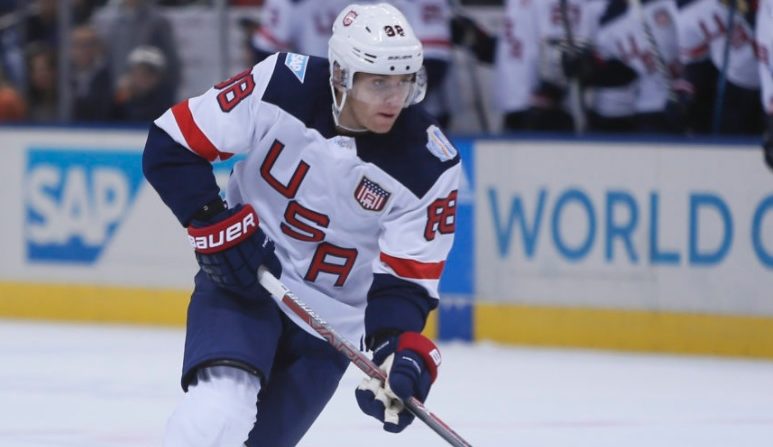 Unfortunately, NHL players will not be at the upcoming Winter Olympics in Pyeongchang. The reasons why have been covered to death, so instead of doing that, let’s peruse over what might have been if NHL players were heading over to compete.

Team USA would have been entirely filled with NHL players, and the breadth and scope of the young talent available for potential selection is as deep as the U.S. has ever had in hockey. Who might have been off to Pyeongchang in an ideal world?

Here are some of our ideas:

All three of these goalies have had fantastic starts to their season and would have been locks for the Olympics.

Quick has the experience from 2014 and is playing some of his best hockey since, Schneider is the entire reason why New Jersey currently sits in playoff position and John Gibson is the reason why Anaheim is still afloat in spite of their litany of injuries to critical and key players. Who would have started would have been an open question (I personally lean Schneider) but there is no wrong answer here.

He’s been dynamite this year and is a large reason as to why the Jets are now where they are. But a hypothetical Team USA GM probably goes with more experience that Hellebuyck would offer for this kind of stage.

There aren’t a ton of standout defensemen here, but there is plenty of depth to choose from. Good defensemen, such as former mainstay Ryan Suter, would be staying home. But as for what the U.S. would have, they’d have a great amount of skill and ability to move the puck, with a solid dash of youth.

Werenski, Jones and McAvoy are budding superstars, and there is plenty of veteran experience with McDonagh and Big Buff. Leddy deserves it based on what his coach says is Norris trophy winning play (we agree) and Justin Faulk is incredibly underrated for what he does with the Hurricanes in all situations, plus he was on the U.S. roster in Sochi.

That’s a pretty solid group of defensemen that would miss the cut. Suter has lost a step and is on the wrong side of 30, which is why in this example he misses the cut. Fowler, Shattenkirk, Trouba and Gostisbehere all have had very solid seasons, but don’t do quite as much as some of those who made the list ahead of them. Other players like Johnson, Krug and even Carlo would have been sleeper choices, but haven’t had quite as good of seasons as their counterparts.

For the sake of argument, let’s assume Kesler would be healthy by February. If he was, there’s no doubt he’d be on the team. Ahead of him are just three of the best young centers in the game, which transformed a group of solid centers from four years ago into one of the very best in the tournament. The idea of watching Matthews, Eichel and Larkin again on the same team (after Team North America in the World Cup of Hockey) is tantalizing.

This is probably the weakest position in terms of depth in the entire U.S. player pool. Trocheck has quietly had a solid season playing basically everywhere in Florida, Stepan has been hurt by being on a terrible Arizona team and Stastny is a little long in the tooth. There isn’t much beyond that.

That’s a fun group of wingers. You have the speed and skill of Kane, Johnny Hockey and Kessel, along with tried and true program mainstays like Pavelski and Wheeler for veteran experience. Pacioretty would make the team in spite of his current scoring struggles, and Kreider would be there to annoy the living daylights out of basically everyone else. That final left wing spot is a fascinating duel between players like James van Riemsdyk, Matthew Tkachuk and Guentzel, but Guentzel’s versatility to play center and wing probably gives him an edge.

Oshie would be there for experience in the shootouts, god forbid they’re needed again, and Boeser is another young rising forward who has bundles of talent that could be used here to add an infusion of youth and speed to a group that isn’t exactly lacking for it. Still, more can’t hurt.

There’s a surplus of left wingers who would miss the cut, and a few exciting young players that would narrowly miss out. Keller and DeBrincat are both big Calder contenders, Lee is having a wonderful season on a line with John Tavares, and Okposo/van Reimsdyk are both good veteran wingers who bring good scoring touch. There isn’t exactly a lack of depth at both wings, is there?

Because of the NHL’s stubborness among other things, this roster remains only conjecture and we’ll never know who would have represented the stars and stripes in Pyeongchang if NHL players would have been allowed to go. It’s a shame, but at least you can marvel at how good this team would have been.

It certainly would have been better than that garbage from the World Cup of Hockey.

1 thought on “What would Team USA look like if NHL players participated in the 2018 Winter Olympics?”