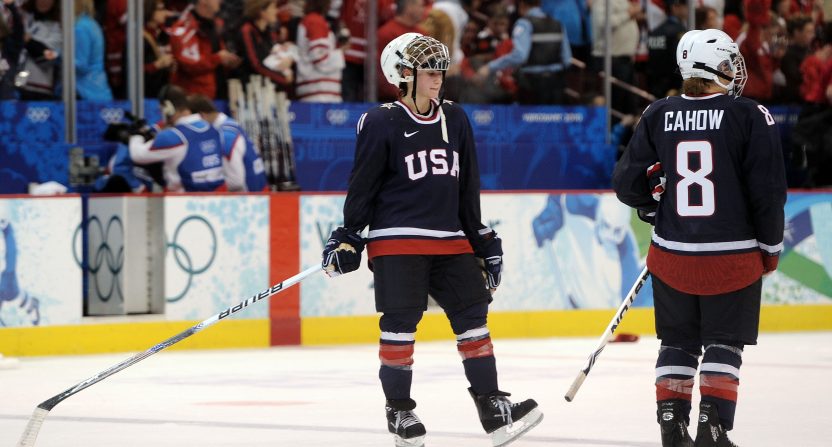 The equal pay fight has arrived to hockey.

The U.S. Women’s Hockey Team announced that it will boycott this year’s IIHF World Championships in Plymouth, Michigan, because the team has not made “meaningful progress” in pay negotiations, according to ESPNW.

“We are asking for a living wage and for USA Hockey to fully support its programs for women and girls and stop treating us like an afterthought,” said captain Meghan Duggan. “We have represented our country with dignity and deserve to be treated with fairness and respect.”

This is the latest fair pay fight to come to national team sports, all of which have involved very successful women’s national teams. The women’s hockey team has won six of the last eight world championships, and it joins the U.S. Women’s National Soccer Team, which won the 2015 Women’s World Cup, in wanting equal treatment.

The women’s soccer team refused to play a friendly in Hawaii in December 2015 because of poor turf conditions, and last March, five of the team’s best players accused U.S. Soccer of wage discrimination and brought the organization to court. The team has been negotiating a new CBA and despite a chance they would strike, restructured its union in hopes of gaining more ground without needing to strike.

According to ESPNW, USA Hockey players say they face severe wage discrimination for what amounts to a full-time job:

In the past, USA Hockey has provided the players with $1,000 per month during the six-month Olympic residency period. According to the players, USA Hockey pays virtually nothing during the remainder of the four-year period, despite its expectation that in each of the non-Olympic years, the players train full-time and compete throughout the year.

“It is a full-time job and to not get paid is a financial burden and stress on players obviously. That is the conversation my husband and I are having right now,” said player Jocelyne Lamoureux-Davidson. “Is playing going to be more stress than we can handle? Sadly it becomes a decision between chasing your dream or giving in to the reality of the financial burden.”

With two major national teams now pushing for change, hopefully that change will eventually come. At the very least, it puts pressure on sports organizations to start paying their players fairly.