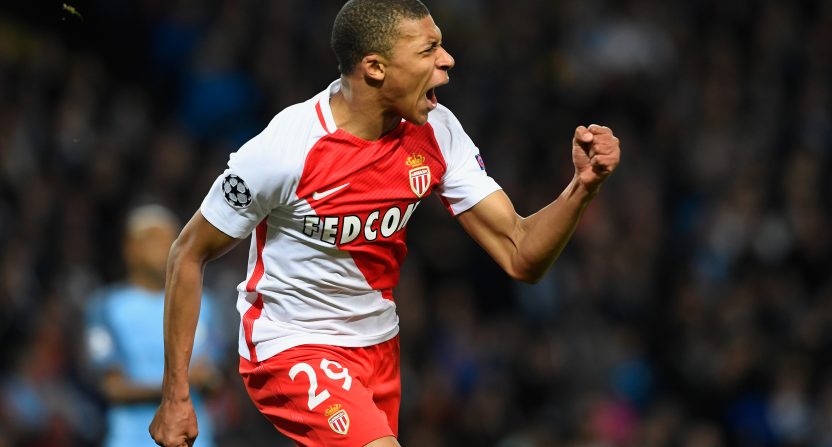 For a young French striker, being compared to Thierry Henry has to be about as good as it gets. Few players can hold a candle to the legendary Arsenal striker on the pitch. Monaco’s Kylian Mbappe, however, is starting to look the part in more ways than one.

Mbappe has a long way to go before he’s anywhere near Henry’s level, but his game has drawn plenty of attention from Europe’s biggest clubs. Arsenal boss Arsene Wenger, the man who signed Henry, compared his former striker with the up and coming Mbappe. The 18-year-old even wears his socks up to the knee, reminiscent of Henry’s style.

The comparisons to Henry run the risk of putting too much pressure on the teenager, but so far he’s handled himself well. Last season, Mbappe broke a Monaco club record by becoming the team’s youngest goal scorer. That record was previously held by, you can probably guess, Henry.

Monaco held off selling the youngster last summer, and they’ve reaped the rewards this year. The club sits three points above PSG in Ligue 1 in France and will play against Manchester City in the last 16 of the Champions League. Mbappe has scored 16 goals in 30 appearances for the French leaders this year. Nine of his 16 goals have come in his last eight matches. This campaign must be bittersweet for Monaco as the better Mbappe plays, the higher his demand will soar and the more likely they will have no choice but to sell him.

It seems likely that Mbappe will leave Monaco at some point. Arsenal tried hard to purchase him last summer and could try again. However, the Gunners won’t be alone. Mbappe’s play this season has turned heads across Europe. Clubs like Manchester United, Manchester City, Liverpool, Arsenal, Chelsea, Barcelona, Real Madrid and Bayern Munich have all been rumored to be interested in the French forward.

While still under contract for a further two years, Monaco holds the cards here. They’re not going to let their young prodigy go for anything short of a massive payday. Monaco sold Anthony Martial to Manchester United back in 2015 for €50 million. Mbappe would likely command more than that.

The good news for Mbappe is that time is on his side. At only 18, Mbappe has time to decide his future without rushing into anything. Martial and Memphis Depay made moves to United at a young age and haven’t exactly lived up to expectations. Memphis has been sent to Lyon on loan and Martial has struggled to see significant minutes this season.

Part of the problem with the two aforementioned players is they haven’t settled into a steady role. This is an issue with Mbappe as well as he’s been deployed out wide as well as down the middle. However, with Mbappe, he’s excelled at multiple positions. Henry was the same way. The pressures of playing for a massive club can put strain on such a young player, but Mbappe seems ready for the challenge. That said, no prospect is ever a sure thing, and Mbappe needs to feel comfortable whereever he goes. Otherwise, there is no rush and staying in Monaco could be a real option.

Monaco will try to overturn a 5-3 deficit heading into the second leg against Manchester City. Helping to lead the charge will be Mbappe. If he truly is Henry’s heir apparent, there is no better time than the Champions League to make all of Europe sit up and take notice. Thierry Henry will be watching, and so will just about every sporting director on the continent.