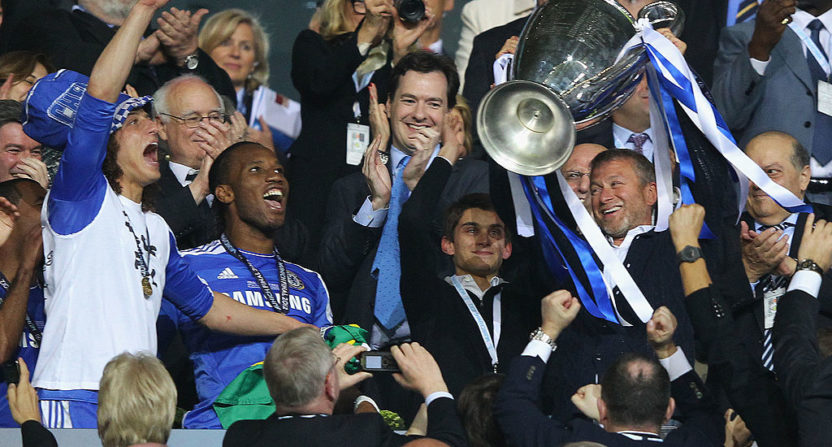 But though these Premier League clubs have more money than they know what to do with, none of the five would probably crack the five best clubs right now on the continent. Is this finally the year in which that changes?

In last year’s Champions League, Spurs flamed out in the group stage, Arsenal and Manchester City were shellacked in the round of 16 and only plucky little Leicester could soldier on to the quarterfinals before running out of steam. With this year’s crop of five, the situations are very different. City has a much better squad than they did last season, Chelsea and United are both semi-regulars to this competition, Spurs can only do better than they did last year and even Liverpool should have the depth to compete thanks to the injury issues they faced last season.

With all of these clubs feeling pretty decent about their chances, which club is the Premier League’s best hope to do what Chelsea did five years ago and no English club has come close to doing since?

With all due respect to both Spurs and Liverpool, their bigger challenge this season might be making the Champions League again next season. Both squads have issues with depth that will hamper them in the group stage. Spurs don’t have the depth, period, until they make new signings, and Liverpool already have issues themselves with injuries, such as to Adam Lallana, that will hurt their campaign.

Also, and maybe more importantly, both are not going to be handed favorable draws because of the pots they’re in. Spurs will more than likely be in pot three, meaning they could end up getting both Bayern Munich and Barcelona in their group for example, and Liverpool will be in pot three. Those draws, combined with their squad problems as of now certainly limits their chances to get out of the group stage, let alone making a charge to win the tournament.

Man City, United and Chelsea fare far better on both of those fronts. Therefore, they have far better chances of winning or at least advancing farther in the tournament. In order to win, they’re going to have to beat the likes of Real Madrid, Barcelona, PSG and/or Juventus to do so. That’s going to be tough anyway.

All of them on paper look to have better squads than they did last season, and all are certainly capable of competing on multiple fronts without much trouble. All three teams spent big money to improve the spines of their teams to make what were already strong positions even stronger. All three teams have world class managers who have proven themselves on the biggest stages multiple times and certainly can do so again. Each of these clubs have all of the necessary puzzle pieces in order to win the Champions League. But in order to hoist that trophy in Kiev, clubs need something different, an x-factor that separates them from the rest of the pack.

Chelsea, United and City all have that x-factor, seemingly. They each have prolific goalscorers, creative players who can break open games in the blink of an eye, and very good goalkeepers, though Man City have more questions there than do United and Chelsea. Both Chelsea and City have proven Champions League goalscorers, while this will be the first go-around for Romelu Lukaku in this competition. So while he is still one of the best strikers in the world, he has a little something to prove here. Chelsea will also have something intriguing to prove to the world after a year out of Europe, and Man City’s perennial underachieving in this competition also gives them added motivation.

With all of these factors taken into consideration, which of Chelsea, Manchester United or Manchester City has the best chance of ending the English hex in the Champions League? It comes down to a combination of all factors, not only the squads and the managers but their draw, ability to play against other big teams across Europe and that extra bit of motivation needed to summon the courage in critical moments.

All of these clubs have it, but England’s “best hope” would likely be Chelsea. There is something about Antonio Conte, his management and his tactics that separates Chelsea from City under Pep and United under Mourinho, even considering Chelsea’s additions don’t jump off the page quite as much as the Manchester clubs’ blockbuster dealings.

While all three of the aforementioned clubs can certainly win the competition, as things sit right now, Chelsea have the best chance of all of them, albeit slightly, to end the English drought in the Champions League.