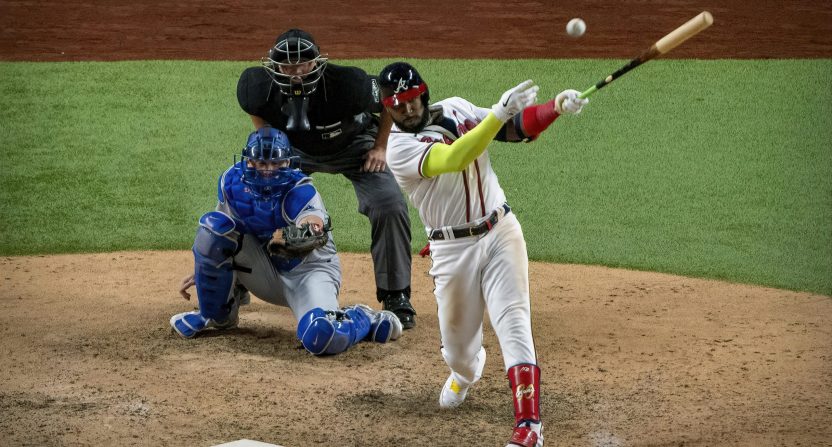 Earlier on Friday, the defending champion Los Angeles Dodgers made a huge splash by signing starting pitcher Trevor Bauer to a three-year, $102 million contract, turning an already-juggernaut roster into an even more dangerous one. That comes after NL contenders such as the San Diego Padres, New York Mets, and St. Louis Cardinals had also made big moves this offseason. The Atlanta Braves, meanwhile, hadn’t really done much, with their most notable move being the addition of 37-year-old starting pitcher Charlie Morton, who had a 4.74 ERA — granted, with a high-quality FIP of 3.45 — in 2020.

Well, the Braves made a big move on Friday night, and it’s a huge boost to their offense. Or, it at least gets the offense back to the unit they had on paper in 2020, which turned out to be one of the best offenses in baseball.

Atlanta has agreed to a four-year, $65 million deal with outfielder Marcell Ozuna. The Braves released a video on Twitter announcing the signing.

According to ESPN’s Jeff Passan, there’s a fifth-year option in the contract that could make it an $80 million deal total.

Outfielder Marcell Ozuna and the Atlanta Braves are finalizing a four-year, $65 million deal, sources familiar with the agreement tell ESPN. There is a fifth-year option that would take it to $80 million.

Ozuna will bat third or fourth (he batted in both last season) behind Ronald Acuña Jr. and Freddie Freeman in the Atlanta lineup. He’ll get many, many opportunities to drive in runs, and he’ll surely cash in on a lot of those opportunities. Facing Atlanta is going to drive a lot of opposing pitchers mad in the first inning.

Now, we can’t ignore the defensive side of things, and that’s a legitimate concern with Ozuna. He doesn’t move like the guy who played more than 3,500 innings in center field for the Miami Marlins in 2013-17. If he could be even average defensively in left field and right field for Atlanta, they would be thrilled. Regardless, his bat will far outweigh the defense in the short-term. And the designated hitter is likely coming to the NL before Ozuna reaches the back half of his contract.

This is a move the Braves had to make. It’s hard to see how their roster could match last year’s team without a move like this, and it’s hard to see what other move could be made in free-agency to provide the same impact to their roster on paper. It would be one thing if the teams they’re most concerned about didn’t improve much either on paper, but that’s not the case. To be able to have a realistic shot to get through all of the Dodgers, Padres, etc on the NL side of things in October, the Braves needed to make another big move or two.

So, the addition of Ozuna could truly be the difference in the Braves winning the NL East or not. And we know that he really helps their chances to do damage in October, as he showed against the Dodgers in the 2020 NLCS.