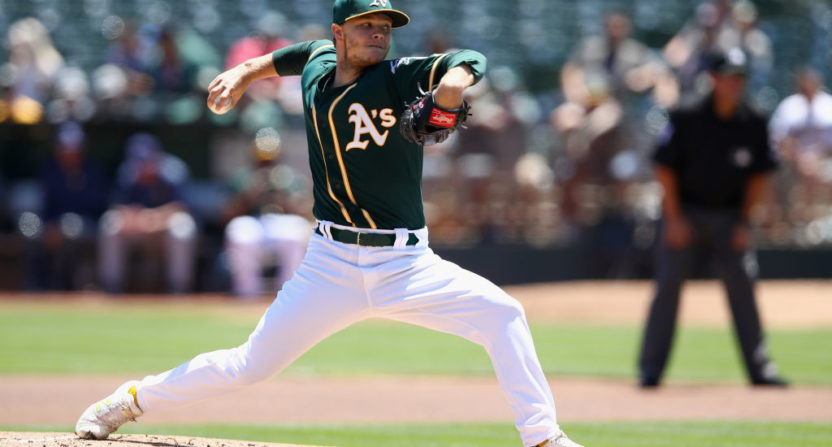 In case that flurry of moves hasn’t already left you incorrigibly lost, we’re going to help you through the deadline by rounding up and analyzing every notable trade. We’ll start with one that went down late Sunday night.

The Cubs, who have already added Quintana in July, filled two less glaring holes, adding another relief pitcher and a solid (maybe overqualified) back-up catcher. Wilson, who had been closing for Detroit, is the big get here. Although the lefty isn’t a top-line reliever, he’s quietly working on his third straight year of dependable work. Since 2014, he sports a 3.38 ERA, a 3.00 FIP and 186 strikeouts in 160 innings. The Cubs’ bullpen, already one of baseball’s best, will benefit from his presence.

Avila is a nice add as well for the North-Siders. In the midst of his best ever season, Avila is a more-than-capable backup to Willson Contreras and could reasonably step in as the starter if necessary.

The Tigers get a couple of intriguing prospects. Candelario can really hit and is almost Major-League ready. He was so readily available only because he’s blocked by the Cubs’ glut of position players. Paredes, an 18-year-old in A-ball is more of a lottery ticket. This return is fine for Detroit, though it’s fair to look at this trade, coupled with the one that sent J.D. Martinez to Arizona, and wonder if general manager Al Avila is maximizing his assets.

Boston, locked in a battle for first place in the AL East, strengthened an already-sturdy bullpen by snagging the Mets’ closer. Reed has been stingy this season, with a 2.57 ERA this season, though his peripheral stats (3.15 FIP) are a bit less impressive. He might have been under-qualified to be the Mets’ top reliever, but he’ll slot in well behind Craig Kimbrel in Boston as a set-up man who get get out both righty and lefty hitters.

It helps that the Red Sox didn’t have to give up any top-tier prospect in the deal. The Mets apparently opted for quantity in their return, adding three 22-year-old right-handed pitchers who are far from can’t-miss Major Leaguers. Nogosek was the No. 18 prospect in Boston’s so-so farm system, Callahan No. 23 and Bautista No. 28. That’s a substantial price for a two-month rental reliever but nothing that will change the franchise.

Astros get: LHP Francisco Liriano
Blue Jays get: OF Nori Aoki and OF Teoscar Hernandez

The Astros reportedly want to add a few pitchers, and Liriano is… well, he’s a pitcher. A useful starter as recently as 2015, Liriano seems to have lost it. Among those with at least 80 innings pitched in 2017, he has the third worst ERA (5.88), and his FIP (4.72) isn’t too much better. This is the veteran lefty’s second straight season as a vastly below average pitcher, and at 33 years old he might be done. The Astros, who reportedly plan to use Liriano out of the bullpen, in hopes that he’ll rediscover his earlier form in a new role. Houston will presumably pay the rest of the roughly $4 million still owed to Liriano this season.

The main piece heading back to the Blue Jays is Nori Aoki, a serviceable outfielder having a bit of a down year. Aoki is controllable through next season and could play a role in Toronto if the Jays hope to contend in 2018. Even at 35, he’s still good for a .700 OPS and solid defense at the corner outfield positions. Hernandez, 23, played briefly in the Majors last season but has spent most of this year in Triple-A, posting decent numbers in the high-offense Pacific Coast League.

With Nick Ahmed and Chris Owings hurt and Ketel Marte on the bereavement list, the Diamondbacks needed an infielder. They got one in the well-traveled Rosales, who can’t really hit and is not a great fielder but stays employed because of his versatility.

In exchange for Rosales, the A’s got a 22-year-old righty whose ERA has exceeded 5.00 in each of the past three seasons in the low minors.

Jeffress heads back to Milwaukee a year after the Brewers dealt him and Jonathan Lucroy in a deadline blockbuster. The righty has struggled badly this season, with a 5.31 ERA and 19 walks in 40 2/3 innings, but he adds a little depth to a bullpen that has already added Swarzak and could gain another arm before the deadline.

Scott is a 25-year-old who has never pitched about Double-A.

After days of reports that this trade was getting close, the A’s and Yankees finally pulled it off an hour before the deadline. Gray was arguably the most valuable arm on the market, a 27 year old with All-Star potential and two more years of team control after this one. After an injury-tarnished 2016 season, the righty has bounced back with a 3.43 ERA and 3.24 FIP. Gray joins a Yankees rotation featuring Luis Severino, Masahiro Tanaka, CC Sabathia, pushing either Jordan Montgomery or newly acquired Jaime Garcia to the bullpen. Without Gray, this was a solid rotation. With him (and Garcia) onboard, it could be one of the AL’s best.

The A’s got a nice haul in return, snagging three of the Yankees’ top 12 prospects. Oakland was reportedly high on Mateo, a speedy infielder/outfielder who was blocked in New York, and Fowler and Kaprielian looked like potential stars before suffering injuries this year. All three prospects the A’s acquired could be in the Majors as soon as next year, indicating that Billy Beane and David Forst are looking at a short-term rebuild more than a long-term on.

Though Mateo, Fowler and Kaprielian are nice pieces, the Yankee have to feel good that they got the pitcher they coveted without giving up top prospects Gleyber Torres and Clint Frazier—or any of their top three pitching prospects Chance Adams, Justus Sheffield and Domingo Acevedo. With a half-game lead in the AL East and a potential ace (or at least No. 2/3 starter) under contract for the next two and a half seasons, it’s a good day in Yankeeland.

The Indians became the latest content to bolster their bullpen, adding a solid righty to set up Cody Allen and Andrew Miller. In 11 Major-League seasons, Smith has never posted an ERA below league-average, and this year his 2.31 FIP and 51 Ks in 31 2/3 innings suggest he’s been better one of the AL’s better relievers. He’ll return to a city where he spent five highly productive seasons, from 2009-13.

Cleveland pulled off this bullpen upgrade without parting with any top-30 prospects, making this a nice deal for the AL Central favorites.

Hernandez, in the midst of his best Major-League season, returns to Arizona, where he pitched from 2011-15. The Diamondbacks already have the second best bullpen ERA in baseball, so this was hardly a dire need, but it never hurts to add a guy with a 2.23 ERA and 1.86 FIP.

This trade seems to signal that the Angels are giving up on this year’s playoff hunt. In return for Hernandez, they received a 20-year-old currently pitching at low-A.

The bullpen with the best ERA in baseball just got a little bit better. After missing out on the Orioles’ Zach Britton, the Dodgers settled for lefty Tony Watson, whose 2017 numbers (3.66 ERA, 4.69 FIP) aren’t dazzling but who has shown ability in the past to be a good set-up man. Watson may feel like a letdown after speculation that L.A. would acquire a top-shelf starter or shutdown reliever, but he makes an already-dominant team a little better.

In return for Watson, the Pirates get two players currently in the low minors, including Cruz, the Dodgers’ No. 21 prospect.

Weeks after adding Sean Doolittle and Ryan Madson, the Nationals picked up a third solid reliever—one with closing experience and a 2017 All-Star nod on his resume. Kintzler will always invite skepticism because of his pitch-to-contact style, but he has now put in a year and a half as a dependable late-inning reliever, and Washington needed another arm.

Kintzler didn’t come particularly cheap for the Nats, who forked over the No. 17 prospect in their system, a 20-year-old lefty starter currently in A-ball. He’s a good get for the Twins, who decided at the last minute to become sellers at this deadline.

Watson wasn’t the only lefty reliever the Dodgers scooped up. They also grabbed Cingrani, a 28-year-old who hasn’t ever quit figured it out. Cingrani currently sports a 5.40 ERA in 23 1/3 innings and hasn’t finished below 4.00 in ERA or FIP since 2013.

In return for Cingrani, the Reds picked up Van Slyke, a veteran outfielder currently at Triple-A, and Clementina, a 20-year-old still in rookie ball.

One of the biggest questions entering this trade deadline was whether the Rangers would deal Darvish two months before he was set to hit free agency. As it turns out, they did just that, sending him to Los Angeles in a last-second deal.

Without Darvish, the Dodgers were already the best team in baseball and arguably one of the best teams in modern history. With him, they look as unstoppable as a baseball team can be. Though Darvish has struggled over the past few weeks, he’s a 30-year-old with awe-inspiring stuff and a 3.42 career ERA. He has struck out more than a batter an inning each season of his career, including this one, and currently ranks fifth in the AL in innings pitched. Darvish provides a capable replacement for Clayton Kershaw while the lefty is injured and will serve as a highly qualified No. 2 starter once Kershaw comes back.

The Dodgers were able to pull off this trade without including top prospect Alex Verdugo, which is a victory for L.A. The big piece headed to Texas is Calhoun, the No. 69 prospect in baseball, per MLB.com, a 22-year-old with a Major-League-ready bat but who lacks a clear position. Alexy and Davis also ranked among the Dodgers’ top 30 prospects, though neither is considered close to the Majors.

Beckham, a former No. 1 overall pick, never panned out in Tampa, and it seemed the Rays eventually decided he was more trouble than he was worth. The Orioles, on the outer fringes of the playoff race, get a shortstop hitting a respectable .259/.314/.407 (though also a potential clubhouse headache). At only 27 and with three years of team control remaining after this one, Beckham could be a steal.

It’s not quite clear what’s in this one for the Pirates, who pick up a 40-year-old righty with an ERA of 4.07, in the midst of a season that likely won’t end in a playoff berth. Apparently the idea is to plug the hole left by the departed Tony Watson and keep the team’s scant playoff hopes alive.

The Phillies’ return was unsurprisingly meager—a 23-year-old A-ball pitcher—but they did well to offload a costly pitcher who doesn’t play a role in their future.